On Tuesday this week Nasdaq announced they were buying Quandl – an alternative data company. This follows a previous initiative within the global exchange and data company to organically build their own alternative data business. While the terms of the deal and associated financials weren’t announced, the impact on Nasdaq’s bottom line is likely to be de minimus. Greenwich Associates’ most recent estimate for the size of the market is $300mm which is about 30% smaller than the total annual revenue for Nasdaq’s data products business.

This is a rapidly growing business, however, and we expect to see even faster growth as adoption spreads from the quantitative investors who were the early adopters to the broader fundamental investing community. Case in point, a recent Greenwich Associates study found that 50% of institutional investors are planning to increase their use of alternative datasets. 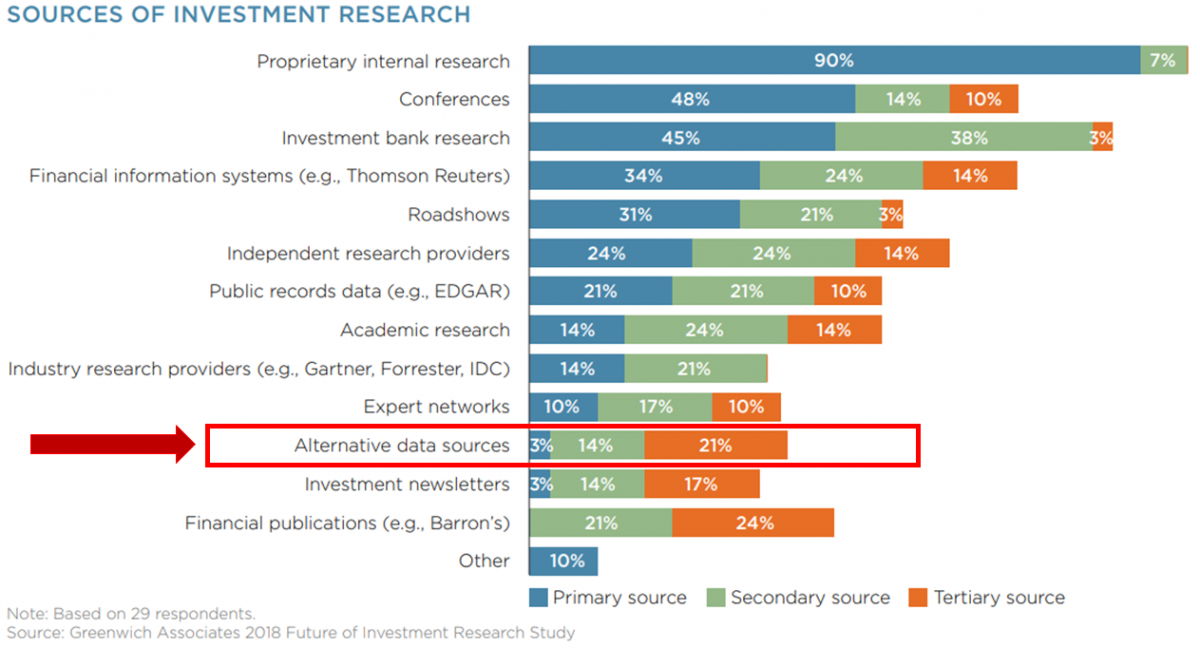 Nasdaq’s decision to acquire one of the leading brands in the space is a strategic bet on the future of the industry. And with a vast distribution network of clients, the company will be able to help drive the further adoption of alternative data among institutional investors.

What did they buy?

In the alternative data space there are different types of companies. Some focus on one or a few data sets where they have particular expertise. For example, a weather forecasting company will just sell datasets related to weather. Other firms can be considered aggregators of alternative data, meaning that they collect various different alternative datasets and re-sell them to investors. Quandl falls into this category with an offering that includes about 350 alternative data sources.

Quandl is also one of the brand leaders in the space – a recent Greenwich Associates report found that Quandl scored highest in terms of brand recognition. On a number of levels, this deal makes a lot of sense for Nasdaq.

However, it also takes a player off the board and has likely left other large data providers wondering what their next move in should be. The leading market data terminal providers Refinitiv, Bloomberg and FactSet are all delivering alternative datasets to their clients, but may now be wondering if their strategy should include acquisitions. Other potential acquirers include IHS Markit who specialize in analytics for the various industries they cover, and S&P Global, whose recent acquisition of Kensho may give them an advantage in the data science part of alternative data.

Eagle Alpha and Neudata are two other alternative data aggregators, and could now become targets. Our research shows that web-scraped data, consumer spending data, and sentiment are some of the most popular types of alternative data. Firms focused on this space include Thinknum, 1010data, and Dataminr.