Brash of the Titans

The latest shock to the markets isn’t what is happening in the S&P or the Dow Industrials, but what is happening slightly behind the scenes. In a somewhat unusual presentation on Monday, June 22, 2020, the SEC and the Anti-Trust Division of the Department of Justice (DOJ) presented a webinar on the topic of market structure.[1] After espousing on the virtues of competition, and the need to modernize regulatory schemes to keep pace with fast moving markets and data, the Assistant Attorney General for the Anti-Trust Division of the DOJ, Makan Delrahim, announced a Memorandum of Understanding (MOU) between the SEC and the DOJ.

Although this first-of-its-kind MOU between these agencies does not appear to be public, Delrahim expects it to:

Delrahim was followed by SEC Chairman Jay Clayton and Director of the Division of Trading and Markets Brett Redfearn. Chairman Clayton and Director Redfearn took turns discussing the regulatory approach to their main areas of concern. While their discussion was robust[2], let’s focus on the main intersection for the DOJ and the SEC’s under their MOU (try to say that three times fast). 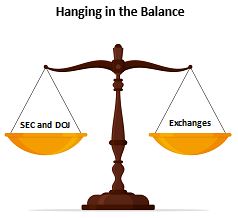 Weighing in at 800 Pounds

The SEC has three filings which form the basis of their recent Reg NMS 2.0 initiative. First - a proposal to rescind the effective upon filing for NMS Plan fee filings.[3]  In the post Dodd Frank era, SRO fee filings are effective upon filing, but NMS Plan fee filings are only effective upon filing pursuant to Rule 608 of Reg NMS. The SEC staff expects this will be up for action with the commissioners shortly. Second – the “governance” SIP proposal, which the SEC recently ordered the SRO’s to implement.[4] Under this order, the current multiple SIPs will be replaced with a single unitary body. Third – the “infrastructure” proposal – which would add additional data to the SIP and provide for a decentralized competing SIP model.[5]

The SEC’s main thrust is that the markets have changed, and changed mightily, since the imposition of Reg NMS back in 2005, to say nothing of the National Market System itself back in 1975. They argue that their proposals will bring much needed scrutiny over the competitive nature of the SIP presided over by the SROs. To bolster their claims, the SEC pointed to data derived from exchange Form 1s from 2008 to 2013 showing that for seven of the largest U.S. equity exchanges revenue from market data and connectivity rose “at least” 65 percent. During the same period, net revenues from transaction services rose “at most” 13 percent. Moreover, according to the SEC, exchange operating expenses declined 4 percent and operating income increased 106 percent during this same time frame.

This renewed focus on the costs of running the exchanges, and the revenues generated by differing parts of their enterprises should come as no surprise. Back in May of 2019, the Staff promulgated Guidance on SRO Rule Filings Related to Fees.[6] That guidance laid out the Staff’s expectations of what the SRO’s would be required to substantiate in order to justify individual SRO fee filings to the SEC. In significant part, that guidance related to the ability of exchanges to provide data and analysis to prove competition, whether via market-based review or a platform economic theory.

So, the question has to be asked, why now? Well, the SEC has received a recent defeat through the courts. The long-standing SIFMA (fka NetCoalition) case challenging SRO fee filings was finally decided by Court of Appeals for the D.C. Circuit.[7] In that decision, the court held that a challenge to SRO fees as a “denial of fair access”[8] was not applicable to a fee of general applicability (e.g. that wasn’t targeted at a specific individual). However, the court made no decision regarding the applicability of the proper standard of review for the SEC regarding its statutory authority regarding such fee filings.

For those of a slight Machiavellian bent, the timing of the MOU announcement does seem portentous. Handed a defeat in court, on limited technical grounds, the SEC is showing its hand toward an even more strenuous review of exchange market data fee filings.[9] The introduction of the DOJ’s ability to bolster the SEC’s already rigorous competitive analysis would seem to spell a long road ahead for the exchanges.

Not Yet Down for the Count

For a very long time, the industry has clamored for more information from exchanges regarding their costs for market data provision. Although there has been little direct success, the changing of the guard at the SEC has clearly opened the door here for some action. To be fair, the exchanges spend a tremendous amount of time, energy and talent on the development of their systems and infrastructure and deserve a fair recompense for that expenditure. At this juncture, the question becomes how the exchanges will prove it, and will the SEC (and the DOJ) believe it.

[8] Under Exchange Act Section 19(d).  However, the court notes that a party may petition under Section 19(c) to amend an SRO’s fee through notice and comment.  If the SEC denied such petition, the court would be able to review (albeit under an extremely deferential standard of review to the SEC).  Alternatively, although there is no right to appeal if the SEC chooses not to suspend a fee filing within 60 days, after it does make such a decision, the final determination to approve or disapprove the fee filing is appealable.

[9] In my opinion, the SROs do themselves no favors when they use blatant anti-competitive language in said fee filings, however (e.g. one such filing stating “it is reasonable to charge [the fee] … because such use of the data is directly in competition with the Exchange and the Exchange should be permitted to recoup some of its lost trading revenue be charging for the data that makes such competition possible.”

Shane Swanson is an equities and financial technology expert in the Firm's Market Structure and Technology practice and has over 20 years of industry experience. Prior to joining Greenwich Associates, Shane was the Chief Compliance Officer (CCO)... view more