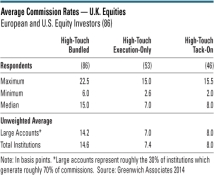 Commission Rates Are Only Part of Story in Managing Spend

We should stress that headline rates are not the primary determinant for what an institution spends overall and should not be viewed in isolation. More specifically, it is turnover or velocity of trading – typically a function of multiple and varying investment strategies employed by funds – that when combined with rates in turn determines an institution’s aggregate spend.

Contrary to an assertion made in a press article referencing our report, these data in no way suggest that institutions—large or small—are getting overcharged or being sloppy in managing trading costs.  Institutional investors have become proactive and skilled at managing those costs.

First, a deeper look at the facts: The table below shows average commission rates on high-touch bundled trades, high-touch execution only trades and high-touch “tack-on,” rates using the large U.K. market as an example. The data reveal considerable variation not only from trade type to trade type, but also in the minimum and maximum rates reported within a given execution type. 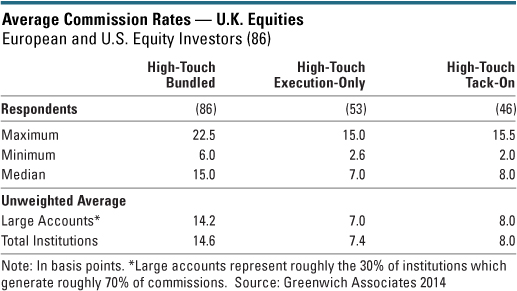 These different types of trades and varying average rates represent the tools institutional investors use to manage the costs of both executing trades and compensating brokers for research and advisory services.  Institutional investors typically employ high-touch bundled trades with a given broker until they reach a target level that fairly compensates the firm for research and advisory services. There are further differences in how each investor values specific elements of research.  After that, trading switches to much lower cost execution-only and low-touch electronic trades. This actively managed channel mix of execution types has an obvious impact on lowering the effective blended-average rate paid by a given institution.

Rather than reflecting any shortcomings to the system, this result suggests institutional investors are employing diverse and sophisticated approaches. In fact, these approaches are providing precisely the type of aggressive cost management pushed for by regulators and demanded by clients.