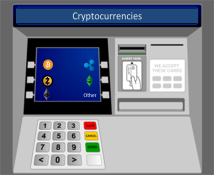 As yet another sign that cryptocurrencies are moving more into the financial mainstream, the CFTC just approved NY-based startup LegderX as a derivatives clearing organization, giving it permission to launch a cryptocurrency options exchange. Although their first product is likely to be a Bitcoin derivative, their license will allow them to launch products based on other cryptocurrencies.

In my last post, I discussed two of the leading altcoins – Ethereum and Ethereum Classic. In this note I will be discussing another two altcoins, XRP and Zcash, whose underlying technology and structure have meaningful applications for financial services.

Ripple was one of the first blockchain companies to be founded seeking to leverage distributed ledger technology to solve financial services use cases. With a particular focus on global payments, Ripple has signed up a large number of banks and financial institutions. Their payments solution is multi-faceted, including a distributed ledger shared among all network participants, an inter-ledger protocol to enable transactions outside of the Ripple network and XRP, the digital currency native to the Ripple ledger.

Today, cross-border payments mostly occur via a hub-and-spoke model. To move money from point A to point B, it will need to pass through at least one hub. The more stops along the way, the more frictional costs will be incurred. There are also capital costs associated with global payments, as banks need to maintain funds (called nostro accounts) in each country in anticipation of payments transactions.

Ripple’s vision is that XRP can be used to address these issues. With liquid-XRP-currency pairs traded globally, it can potentially enable point-to-point payments transactions at lower cost to the hub-and-spoke model. Additionally, this type of transaction will not require pre-funding of nostro accounts, reducing capital costs.

Zcash is a relatively new kid on the blockchain, having been launched less than a year ago. Like Bitcoin, Zcash is an open-source cryptocurrency designed for payments transactions. However, it incorporates some unique technology and functionality that provide strong privacy protections. With the Bitcoin blockchain, there is a complete historical record of all bitcoin transactions associated with every address. Transactions in Zcash, however, are published to its blockchain but the sender, recipient, and amount of a transaction remain private.

Zcash does this by leveraging a new type of zero-knowledge cryptography called zk-SNARKs. Zero-knowledge cryptography, as the name suggests, allows one party to prove to another that something is true without revealing any other information. This type of functionality appeals to banks and financial institutions that wish to leverage blockchain technology but are concerned about privacy and confidentiality.

In May 2017, J.P. Morgan and Zcash announced a partnership whereby they would work to integrate Zcash’s zero-knowledge security technology into J.P. Morgan’s Ethereum-based Quorum project. The price of Zcash tripled on announcement of this news – even though partnership is related to the Zcash technology and not the Zcash coin.

For much of the last 2-3 years, all the talk and all the hype has been about blockchain. Bitcoin and cryptocurrencies faded into the background as people dismissed them as unworkable for financial services. The evolution of the space over the last two years has demonstrated the potential of this asset class, and further innovation will continue to drive cryptocurrencies towards mainstream acceptance.

There are now nearly 1,000 different crytpocurrencies out there, and it would not be possible to describe them all. In this blog series I discussed four of the leading altcoins which have unique characteristics that are already having an impact on financial services and markets. Perhaps one of them will even dethrone bitcoin as the leading cryptocurrency.

In my next post, I will be diving into a branch of the crypto space known variously as ICOs, tokens, cryptoassets or blockchain assets.