When you spend your days living in the world of market structure – as we do here at Greenwich Associates – it can seem as if change happens slowly. While everyone agrees that the current market structure is not perfect, changing it can be difficult because of the vested interests and business models that have built up around it. But the rules, processes and structures that underpin our markets have to change, must evolve and need to revitalize themselves, in order to adapt to changes in technology and business practices.

Today, it seems as if that conversation took a step forward. Nasdaq released a thought leadership paper with some important suggestions for improving market structure. It doesn’t address all the open topics, and puts to one side some of the more contentious ones, but there are some good ideas in this paper that can make a difference. While there are bound to be some areas that some market participants object to, overall we expect this commentary to be well received.

The paper highlighted 5 specific areas with proposals for change:

We will dig into these topics below:

This was something we looked into in our recent paper, Investors’ Take on Market Structure Issues. For liquid securities that trade millions of shares per day, the wide array of execution venues has increased competition and generally improved execution outcomes. At the other end of the scale however, the fragmented market may do more harm than good, making it harder to source liquidity in these names. While there are reasonable arguments against suspending UTP for illiquid securities, it is unlikely to have a strongly negative impact on execution quality. 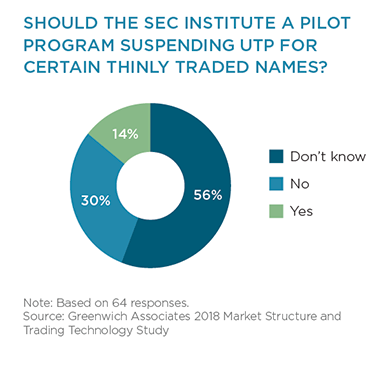 Buy-side traders, according to our study, do not have a strong opinion on this, with a majority unsure of the appropriate course of action. With Nasdaq now pushing the topic via their paper, this is sure to be debated more intensely and stronger opinions will form.

While this type of change does clearly benefit incumbent listing exchanges at the expense of other venues, the subject deserves further discussion as part of a broader plan to improve market structure.

Reform of the Order Protection Rule

We have covered this before fairly extensively. For example in this blog: Time for a Fresh Look at the Trade Through Rule, we discuss some of the deleterious effects of this rule, such as increased complexity and focus on speed and queue positioning.

In our recent paper, Investors’ Take on Market Structure Issues, we found that there was no strong sentiment from the buyside about what to do, although a majority favored some sort of reform.

14% thought that it should be modified so that only exchanges with a certain level of market share should receive protected quotes. This is the specific proposal being put forward by Nasdaq – and the threshold proposed is only 1.5% which is lower than the equivalent regulation in Canada and low enough to exclude only the smallest of exchanges.

Technology has evolved significantly since the rule was introduced and today we expect nearly every equity order that hits an exchange has already been through a Smart Order Router which optimizes routing to the best priced venue. In addition, the buyside now possesses much more sophisticated trade analysis tools allowing them to keep track of potential executions outside the spread. The so-called ‘Institutional 606’ could also be easily modified to require brokers to report what percentage of orders are executed outside the NBBO. We continue to believe that the rule is ripe for reform and Nasdaq’s proposal should ignite this discussion.

Nasdaq is right to point out that widely varying nominal stock prices can lead to distortions in market structure. A one cent tick on a stock priced $1000 (0.1 basis points) is a lot different to a one cent spread on a $10 stock (10 basis points). It probably does make sense to adopt a tick regime where the tick size varies based on the price of the stock, although we’re not sure the market is ready to tackle the tick size question again so soon after the Tick Size Pilot program was abandoned. Nor can the operational burden coming from such a change be ignored.

Nasdaq also calls for less rigid fee structures. Certainly it is well known that the exchanges do not want the transaction fee pilot to go ahead, and bristle at the idea of the government controlling the price at which they can sell their product. But putting aside this motivation, there are definitely many benefits to be had from a new approach to exchange pricing. For example, basis point pricing (which charges fees proportional to the notional value of the trade as opposed to the number of shares) would go a long way to removing distortions caused by different levels of nominal stock prices – for example, Sirius XM, priced at $6 attracts a disproportionate amount of market making activity because the per-share rebate represents about 5 basis points. Nearly every other global equity market prices in basis points, not per-share. In addition, in the above SiriusXM example, a one cent spread represents 17 basis points, so the topics of fees, rebates and ticks are interlinked.

While we’re talking about rebates, which clearly influence liquidity provision, perhaps we can talk about other ideas like increasing rebates (Gasp!) in small cap stocks to improve liquidity in these names. It’s just possible that, say, a 1 cent rebate in a stock with a 10 cent spread could increase market maker activity and improve liquidity. And, now we’ve gone there, perhaps we don’t need any rebates for super-liquid stocks like Apple and AT&T.

Nasdaq points out that some users of market data are classified as professional just by the nature of the firm they work for and not for the function they perform.

It’s not the big concession on market data pricing that the market has been asking for, but Nasdaq’s proposal is sound. It does not make sense for a clerical employee at a bank to be classified as professional while a successful day trader is classified as non-professional. This proposal will be popular with retail brokers and should lead to cost benefits for them.

And yes, this only scratches the surface of the market data cost issue.

The SIPs, as a core part of market infrastructure, are governed by what is known as NMS plans which are a defined in section 11A of the Securities Exchange Act of 1934. NMS Plans today comprise only representatives of exchanges. For some time now, brokers and other industry participants have argued they too deserve a seat at the table, given that they also have to build for and abide by the rules coming out of the NMS plans. We wrote about this previously here arguing that broadening participation in the plan would improve governance.

Nasdaq and other exchanges had previously resisted change in the governance of NMS plans so this change of heart, should be seen as positive.

Nasdaq’s thought leadership paper should be welcomed by the industry, even by those that don’t agree with some or all of their suggestions. It proposes some ideas worth considering and, importantly, moves the conversation forward. It doesn’t fully address some of the more divisive topics such as market data fees and the transaction fee pilot, but by leaving these out it will hopefully allow the industry to have a more productive conversation around some of these other topics. It also hints at some potential areas of compromise, which in a diverse multi-faceted equity market, is the best way to effect market structure change.