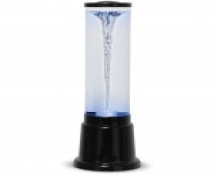 Lights Out In The Dark: Anecdotes about a Forgotten ATS

ConvergEx announced last week that it was euthanizing one of its two dark pools, VortEx. In the grand scheme of the equities market, this was hardly a headline grabber.   In this day and age where ATSs seem so similar, many sporting names with an “X” for dramatic effect and roughly all with similar claims of “anti-gaming” and “minimized information leakage”, it’s no surprise few will notice the passing of this roughly 3 million share per day pool.

But as one of its co-founders, the passing of VortEx had a more profound meaning to me. As a trader turned dark pool and SOR product manager right at the height of Reg NMS implementation, I believed VortEx had the opportunity to be a valuable trading center for unique liquidity. In retrospect, I am sure the folks running the other 10 new ATSs registered in 2007 (making for 43 all together) had similar sentimentalities.   With automated internalization essentially regulated into the markets, this pivotal market structure change was surely going to be the linchpin for success in institutional brokerage. But as an agency BD eventually competing with all the bulges for market share, we could have never predicted the oversized challenges that lie ahead.

Most of the stories you read about dark pools are from the outside with a focus on hard news. Hopefully these anecdotes will give you a different perspective.

An Ironic Proof of Concept

Traditionally on Wall Street, the most common big ticket item usually involves a “guy with a book”.   It seems more palatable for management to take a shot on someone who claims to have an thick rolodex. Although history shows that this rarely works out, I must tip my hat to those nomads who have made a career out of carpet bagging across the Street.

On the other hand, pitching a new technology to management at a mid-sized agency BD based on assumptions about a confusing 523-page SEC regulation is far from a layup.   So, as a proof of concept, our first foray into the dark began by simply routing institutional, crossable order flow to one of the more established dark pools, NYFIX Millennium.   Finally, after 18 months, at least two dozen revisions to a PowerPoint deck and tangible revenue estimates, senior management (mostly with banking pedigrees who admirably tried to but never fully grasped “non-displayed liquidity”) gave us the funds to build our first version, which we registered with the SEC in the fall of 2007.

Ironically, around 3 years later, Millennium, the oldest continuous cross on the street, was suddenly on its way to the glue factory. Given the success VortEx was experiencing, the firm put a modest bid in for the orphaned system and soon our firm was running two dark pools. 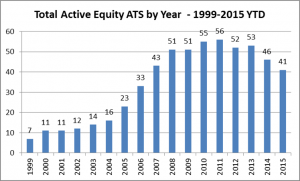 In those years leading up to the acquisition, VortEx was quite successful, jumping from modest volumes of 3 million shares a day in 2008 to a respectable 23 million right before the two pools came under one roof. But success isn’t always measured in executed shares. In product management, opportunity cost is that devil with a pitchfork on your shoulder always needling you to do more.   Along the way, it became clear we may have been taking too many short cuts with the technology to sustain growth.

First, the ATS was built on the same platform as the SOR, a convenience since it shared the same developers. But as NMS also continually inspired more smart routing functionality and advancement, the technology pipeline became jammed. Soon, Tuesday turnovers were being trumped by mid-week rollbacks and our specs were coming back one-third filled at best (to no fault of the hard-working tech team).   By 2010, there were now 55 registered equity ATSs. That’s a dozen more competitors in the marketplace in just three years since the launch of Vortex.

And while market participants were talking up functionality and unique liquidity, we all knew the real game was becoming speed.

The VortEx team accepted the compromises on functionality, but no longer could avoid the need for speed. If the ATS didn’t process orders faster, firms weren’t going to route to it and the business would just simply slip away.

After a failed rebuild of VortEx outside the SOR and on a high tech CEP platform, one of our savvier developers extended a lifeline by cutting down matching time just inside the current infrastructure just below the threshold of acceptability. And, miraculously, that made all the difference. In three months, volumes in the ATS rapidly doubled, reaching 40mm shares a day with inflows surpassing 5 billion shares daily. Speed really did matter.

On the surface, this looked like an amazing success, especially for a small BD punching way beyond their perceived weight class. But, cynically, this wasn’t the product initially intended to be built.

Down the (Mechanical) Rabbit Hole

The original purpose of VortEx, like any ATS, was to pair off intuitional orders.   In a short time, however, institutions were choosing to no longer route directly to most dark pools (with 55 available, how could they?). They were now pushing all their flow through their brokers’ SORs and algos and passing along the dark routing responsibility to them.   Seemingly overnight, brokers’ SOR and algos unexpectedly became the main suppliers of flow for ATSs. Since most brokers owned dark pools themselves, they instantly faced the challenge of balancing internal crossing with external routing to comply with best execution requirements.

There was, however, one constituency that could produce massive inflows without the baggage the brokers were carrying. These were principle trading firms whose main requirement was the ability to move in and out venues as quickly as possible. In essence, HFT soon became the mechanical rabbit that all the ATS greyhounds madly chased. If your pool was fast enough, HFT flow in dark pool could instantly boost volumes, no fancy functionality required. And with many algo and SOR routing strategies optimized for maximum liquidity, the confluence of broker and HFT flow (sprinkled with internal institutional liquidity) could jump an ATS’s volumes dramatically.

As a result, equity order flow became transient, perpetually bouncing from venue to venue, both displayed and non-displayed. With this ecosystem firmly in place, every trading center was out looking for an edge. It was this push for uncharted lands a few years back that is now leaving a handful of broker-run ATSs shipwrecked.

One Plus One Rarely Equals Two

Similar to hiring that “guy with a book”, the other common mistake brokers make is “buying a business”. The “guy” travels light with his rolodex and gym bag, but businesses carry all sorts of extra baggage. Spreadsheets sorted by unique client revenues tends to overstate the synergies being sold and/or understate how existing customers will perceive them.   In this case, distinguishing the pools would always be the greatest challenge.

On that note, the marriage of VortEx and Millennium was a sober affair since most involved were aware of both its merits and risks.   With Millennium came the promise of an expanded clientele but also legacy technology with costs that were likely unsustainable. Given that VortEx’s infrastructure was still mainly held together by bubble gum and chicken wire, the prospect of compressing two tech projects into one was somewhat daunting.

But Millennium and VortEx were both successful products and the great people that came with the new ATS had the experience needed to move to the next level. Leaving the product in those capable hands, I refocused my energies on market structure and became a passive spectator. Eventually the rebuild came (five years later) and I assume most of the original issues were resolved.

In the end, it appears that, although abundant effort was made, the ATSs struggled for their own identity and there simply wasn’t room for two pools anymore. Of the two, VortEx eventually faded back to being the modest 3 million share a day pool we first reached in 2008, and, so its fate was sealed.

In the haze of these current accusations and fines against ATS, I see a silver lining. Dark pools exist today in the equity markets for a reason. Just like reserve orders and hidden order types on exchanges, they allow for customers (yes, mainly institutional) an additional level of control over to whom and how they expose their larger trades.   Looking down at the markets from thirty thousand feet today, you get a sense that the next phase in the evolution is now taking place. 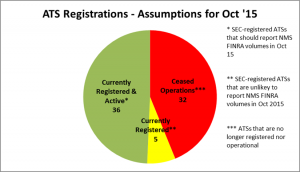 Today, there are currently 36 active equity ATS platforms and, including Vortex, 32 that have gone the way of the Dodo bird. People are not perfect, nor are the technologies they create. web domain I am proud to have played my bit part in US equity market structure, honored to work with a handful of folks who share my sentiment and excited to see where it leads next. For me, all that remains of VortEx is a tiny LED lamp connected to my USB port with water spinning inside like a mini cyclone. It may be a cheap conference giveaway from another era, but I will look over at it each day and chose to focus on the light that came from this dark.
Data aggregated from SEC “Frequently Requested FOIA Document: Alternative Trading System ("ATS") List” http://www.sec.gov/foia/docs/atslist.htm

Craig Viani consults with the Firm's market structure and technology research team and has 20 years of equity market experience with prior roles in trading, product management and best execution. Before joining Greenwich Associates in 2015,...