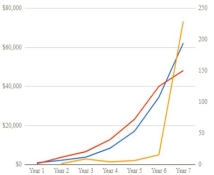 In Order To Save The CDS Market, It May Have Been Necessary To Destroy It

The credit default swap (CDS), a financial product that has seen its volumes and outstanding notional decline for roughly a decade, credit default swaps have found their way back into the headlines—and for good reason. First, they have been at the heart of the kind of financial legerdemain that makes for great journalism. Second, and more importantly, as global central banks begin to normalize their balance sheets and interest rates, credit volatility may well return. As such, there is a race against time to either repair the CDS market or find an alternative.

CDS were created in the mid-1990s as a tool for hedging credit risk. As swaps, there is no exchange of principal, just two streams of cash flows. The protection buyer (for example, a bondholder seeking to hedge) pays the protection seller (for example, a dealer) a stream of coupons agreed to at the time the swap is traded. In the event of default of the reference credit, the protection seller pays the buyer par less recovery rate as determined by a supervised auction of the debt securities of the reference entity, making the buyer whole.

This structure has the advantage of nearly identically matching the cash flows of the creditor—so much so that bank regulators granted capital relief to banks that hedged their credit exposures with the product. In other words, holding a bond alongside a CDS on the same reference entity was considered riskless.

Viral Adoption Before It Was Cool

This made CDS perhaps the most rapidly adopted financial product in history—the iPhone of derivatives. Many credit traders’ careers have only seen the CDS market languish, but from 2000 to 2007, the market grew 10,000%. Think bitcoin, but with a market cap 50,000% larger and with actual working use cases.

Banks hedging with CDS free up capital that they can then extend on behalf of other clients. Banks without a lending relationship with a particular client can produce the same return by issuing CDS on it, thus diversifying their own risk portfolio without engaging the client directly. Ultimately, banks trading CDS among themselves are, in essence, blending the balance sheets of all the banks together, enabling a more efficient allocation of credit risk across the entire financial system. Alas, the history of CDS is not an unbroken string of triumphs.

At the micro level, it took some time to get the mechanics of CDS right. It was an iterative process in which CDS dealers collaborated under the auspices of ISDA. Originally, credit events were determined bilaterally and CDS were settled physically. As a result of some surprising events and the necessity of central clearing, the settlement process has been centralized by ISDA. Now credit events are declared by the Determinations Committee through a documented process, and they are settled by a complex multi-stage auction so innovative (and complicated) that its original form was patented by its inventors.

Did CDS Carry The Seeds Of Their Own Destruction?

At the macro level, the blending of the balance sheets in a way that could not be easily untangled, and the extreme concentration of credit risk in a single issuer, AIG, played a major role in the global financial crisis of 2008. This led to a taxpayer led rescue of AIG in particular and the financial system in general. The taxpayers double as voters, and they duly elected candidates who promised this would never happen again. The legislators and the central bankers responded with the Dodd-Frank Act and Basel III both of which were to have profound effects on the market as a whole, and CDS in particular. They required CDS trade reporting, raised capital charges and reduced capital relief conferred by CDS, encouraged central clearing and established specific trading protocols.

The recent flurry of stories about the CDS market has been driven by the efforts of some market participants to exploit the complexity of the CDS settlement process. For instance, a participant will trade CDS on a reference company with an unwary counterparty. The participant will then negotiate with the company and induce it to either trigger or avert a credit event and then profit from either the settlement of the CDS or from the recovery of the credit of the company. Some of the methods, and indeed some of the people, have been ingenious, making for great journalism.

What it has not made for as yet are elegant solutions. It was only through extraordinary efforts that the current regime was arrived at, and ISDA has recognized the threat that bespoke credit events pose to the product as a whole. The CFTC has opined on the matter, saying that manufactured credit events may represent “market manipulation.” Perhaps the most interesting result has been that the sell side, having worked diligently for years to establish the product, may be passing the market structure baton to the buy side, which has set up its own committee to work on the problem.

Even if the issue of manufactured defaults can be resolved, whether the CDS market overall—and more specifically the single name CDS market—can be revived remains to be seen. From a regulatory perspective, Dodd-Frank divided responsibilities for CDS between the CFTC, covering index CDS, and the SEC, covering single name or security-based swaps. They’ve progressed at different paces: We now have a clearing mandate for index but not single name CDS.

The SEC and the CFTC have recently been discussing policing CDS markets jointly, but there is uncertainty about whether and how they would do this. So we are left with the situation of the CFTC issuing a statement on manufactured defaults in single name CDS, which is technically outside its purview.

Even within the areas where the more active CFTC has created regulatory certainty, the regulatory regime has created structural issues. As Commissioner Giancarlo pointed out in a white paper almost immediately after his accession to the Commission in 2015, many of the ways in which the CFTC chose to implement Dodd-Frank have had the effect of prohibiting market practices that had enhanced liquidity in a complicated market. Now that he’s chair of the Commission, Giancarlo has taken steps to address some of these issues but, as he pointed out in the white paper, some are inherent in Dodd-Frank itself.

Many major market participants, such as BlackRock, have spoken out to save the CDS market. It’s near cliché in the fixed-income world to talk about how “people are worried about bond market liquidity.” It’s no secret that a long period of low rates and benign volatility have led to massive increase in corporate bond issuance. It’s also well known that dealer inventories, a key element in liquidity provision, have declined relative to issuance—as has bond market volume generally.

While an increase in buy-side to buy-side trading would be logical, implementing this shift has proven to be a challenge. As architects of this boom, the world’s central banks are beginning to normalize policy and, as the scale of balance sheet expansion and the duration of low interest rates has been unprecedented, there is no precedent for what happens when these policies are reversed. One thing is true, though—once there are articles in the press declaring that the boom may be immortal, it’s time to check the exits. For the time being, a look at the CDS market structure is not reassuring.

ISDA Virtual Conference: COVID-19 and the Impact on Derivatives