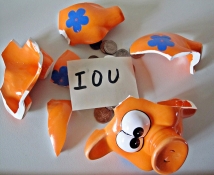 I'm of the belief that the regulatory changes with the biggest long term impact are those related to the cost of capital.  Basel III, CRD IV and whatever the US regulators ultimately decide will prove to be both the carrot and the stick for OTC derivative market participants to change the way they operate.  (Whether those changes are good or bad is a whole other blog post entirely.)

Coming in at a close second, in terms of mitigating systemic risk, is required initial margin.  Its pretty easy to argue that had AIG been required to post initial and variation margin on its OTC derivatives trades than they would have been forced to unwind their positions before things got out of hand.  Instead they were presented with an outsized collateral call all in one shot that sent them into the arms of the US government.

That being the case, I'm glad to see the CFTC finally approved proposed uncleared margin requirements on September 17th.  The vote was a long time coming given that IOSCO finalized its policy framework for uncleared derivatives margin in September of 2013.  The CFTC's proposed rule is largely in line with IOSCO's recommendations.  If anything the CFTC's version of the rule is slightly more punitive, prohibiting the reuse of initial margin for any purpose and requiring the margin to not only remain segregated but to be deposited with a third party custodian (State Street, Bank of New York and Northern Trust rejoice!).

The question this leaves everyone with is what difference will these rules really make?  While uncleared margin requirements are certainly important, my initial conclusion is the end result will not be as traumatic or dramatic as initially expected.

The main reason is the $65 million threshold.  Swap entities only need to post initial margin when the amount required to be posted exceeds $65 million dollars.  What does that mean in practice? If we assume an initial margin rate of 1% for an uncleared interest rate swap per the IOSCO framework, the $65 million IM threshold would be reached for a net notional position of $6.5 billion. $6.5 billion is not the required assets under management of the fund, but the notional size of only the net interest rate swap position.  Furthermore, the investment community as a whole has a tremendous amount of cash on hand.  Fixed income and equity markets both look overvalued leaving many sitting on the sidelines with no idea what to do with their money.  The upside - plenty of cash to post as margin.  Taking all of that into account, the economic impact on the buy side so far seems relatively limited.

For the sell side, the story is slightly different.  The biggest impact of these new rules is the requirement for top tier banks to post initial margin with one another, whereas today virtually no margin is posted between large banks for OTC derivative transactions.  However, given the limited amount of proprietary trading going on in the big banks today due to Volcker, most bank trading in uncleared swap products are done to facilitate client needs.  This means that the positions put on by the bank dealing desks are quickly hedged, which under the proposed rules, would keep the  required amount of IM between banks to a minimum, assuming proper netting.  The one catch here is that market participants can only net within each asset class; so various interest rate derivatives can offset one another, but an FX option and interest rate swap will provide no netting possibilities.

We believe the biggest impact from uncleared margin rules will be on bank operations and compliance departments.  Even if all open bilateral swap trades net the required margin down to zero, a team of lawyers and operations folks will need to prove that down to the letter of the law.  Not to mention the technology changes that must be implemented to track margin posted and received on products that never had an initial margin component to them before.

Uncleared margin rules do matter.  They will take us a long way beyond the state of affairs that led to the financial crisis, and they will incentivize a move to clearing even if via death by paperwork rather than the high cost of posting collateral.  But as written, given today's economic environment, a market wide collateral shortfall seems very unlikely in the foreseeable future.