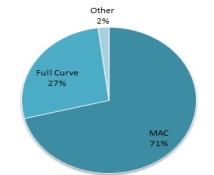 The Results are In: What parts of the rate curve should be mandated for trading first?

Earlier this week the first two made available for trading applications were made to the CFTC starting the clock ticking for mandatory mat chartSEF trading. Those applications started a debate as to exactly how mandatory SEF trading should be phased in. Should day 1 trading mandates only include the most liquid points on the rate curve, or include all interest rate swaps regardless of tenor? I discussed both of these options in some detail in previous posts, and also conducted a somewhat unscientific poll of Kevin on the Street readers as to which approach is best. Given that I do research for a living, I know how to poke holes in research results. That said, let me poke holes in these results before you do.

The quantitative results came back reflecting my qualitative conversations – the market wants to start off with only the most liquid points on the curve, which equates more or less to the ISDA MAC contracts. Big buy side, G14 sell side, industry associations et al seem to agree this is the way to go. The argument is to only require trading where the most liquidity already exists to ease the move to the screen. I get it – but I don’t agree. If the rest of the curve isn’t traded very often, than what’s the harm in including it in the initial mandatory trading list? RFQ is defined quite well to handle trading in illiquid products. Furthermore, sticking to the entire curve will limit confusion and questions that will inevitably come from a more narrow determination (“which contracts are included again?”).

But…its easy for me to suggest an idealist solution when I’m not the one who actually has to implement the changes on day 1. A conversation with a friend at a small (non-SEF) interdealer broker crystallized the complexities of implementation for me. The CFTC needs to consider three key factors when determining the approach for kicking off mandatory trading:

Other issues to watch

Another concern with the current proposals – swaps with effective dates in the past are not included. That means if you trade a mandatory for trading par swap today, when you go to unwind it three days later the unwind does not have to occur on a SEF. That doesn’t make much sense to me (beyond the “that’s how its always been done” argument). If you have to trade to get into a position, you should have to trade to get out of it, even if its off the run. Even the Javelin MAT application covering the whole curve does not include past effective date swaps. Please let me know if you’ve read this differently.

One last debate that seems to be making the rounds – should strategy trades be explicitly exempt on day 1? Switches, Invoice Spread and other similar trade types would become complicated if one leg was mandated for trading while  the other wasn’t. But does that then become a loophole?

The CFTC has a tricky one on their hands in. The Chairman is going to be busy right up until his last day…