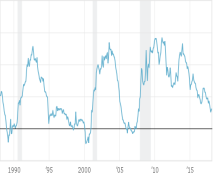 But major bond dealers don’t see eye to eye on what will happen next. Interviews with 42 traders at US bond dealers conducted over the summer found that less than half see the yield curve flattening. Still, this was the most popular answer at both regional and bulge bracket firms. Interestingly, regional banks were twice as likely to think the curve would steepen as to remain the same while the bulge bracket firms were evenly split between the two. One wonders what the regional banks are seeing that makes them think the curve is nearly as likely to steepen as it is to flatten.

Disagreements about everything from inflation expectations to the impact of the trade war with China makes these mixed expectations unsurprising. Nevertheless, the fact that some of the most sophisticated bond traders in the world, who live and breathe bond yields for ten hours a day every day, are so far apart in their views is a stark reminder of how uncertain the future remains. However, these mixed views do all but ensure volatility will finally come back to the rates market in the coming months.

Unlike the divergence of opinion about the future shape of the yield curve, regional and bulge bracket firms agree that credit spreads have one way to go: wider. Over the decade since the end of the financial crisis, global central banks have sought to help the recovery by keeping interest rates low. As a result, many yield hungry investors have fueled a record level of corporate debt issuance.

The Federal Reserve has begun policy normalization. It will likely be followed by the ECB and perhaps someday even by the BoJ. All that corporate debt which has been issued under these benign conditions will have either to be repaid or be refinanced at higher rates, rates that the earning power of these companies may not justify. As a famous billionaire investor is fond of saying, you can only tell who is swimming naked when the tide goes out. Well, bankers seem to believe the tide has turned.

We do not provide investment advice, so we will avoid any discussion of how one might position themselves ahead of these expectations. But what many market participants have spent years waiting for are volatility and volume. An uncertain yield curve and widening credit spreads should make both of those dreams finally become a reality.