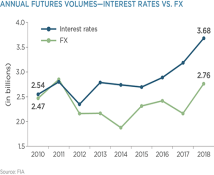 Will FX Go the Way of Treasury Futures?

FX futures make up a tiny part of the global foreign exchange market today, but given recent changes, they and similar instruments have the potential to grow fast enough that FX may eventually follow in the footsteps of U.S. Treasuries—a market that was mostly OTC and in which futures now top cash trades in terms of average daily volume (ADV).

The chart below tracks the growth of Treasury futures over the past 15 years. Does this trajectory represent the future of FX?

The Growing Role of FX Futures

FX futures have an ADV of approximately $100 billion, making up about 2.5% of the $4 trillion that is traded in FX each day. According to FIA, annual volumes have not increased significantly since 2010 and grew less than interest-rate futures. 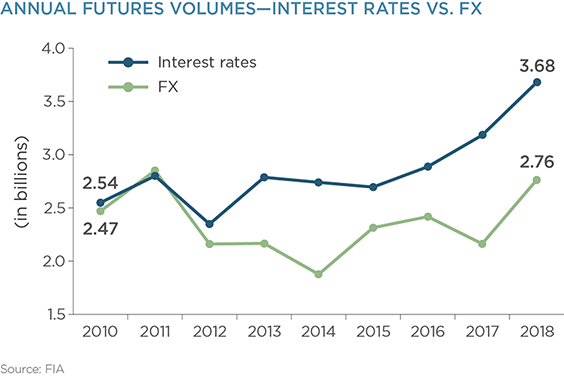 However, trading volumes in cleared non-deliverable forwards (NDFs) have grown substantially since the introduction of Uncleared Margin Rules (UMR) and are now estimated to account for close to 20% of global NDF volume, according to industry sources. Although these sources indicate that the growth in cleared NDFs has hit a ceiling, there are several trends now playing out in the market, which suggest that exchanged-traded and cleared FX products will become a bigger and more important part of the trading activity in FX:

How Will Futurization Affect the FX Landscape?

There are still many questions to be answered before it’s possible to predict precisely how far this shift will go and how large a part of the global foreign exchange market futures and like instruments will become.

Market participants that have not been subject to UMR will soon find out how much more expensive it will be to trade uncleared NDFs. Before this happens, we simply don’t know how much of their trading will go cleared. UMR does not impact spot trading, deliverable forwards and swaps, which make up a large part of the FX market. Any shift from OTC trading in these instruments will depend on how successful the exchanges are in linking the OTC and exchange-traded/cleared markets across a large number of currency pairs.

But if FX futures continue to grow in volume, and if foreign exchange markets ultimately follow U.S. Treasuries by becoming more “futurized,” we can expect continued restructuring and innovation, as executing futures brokers and clearing brokers look to maximize market shares in a growing business. And FX dealers will look to compete and stem losses, in part by attempting to transition trading volume internally from traditional OTC market-making business to their own futures commission merchant (FCM) franchises. And who will be the biggest winners? FX customers, who will be able to reap the benefits of the investments in new product innovation by exchanges, brokers and FCMs alike.

Frank Feenstra consults with the Firm’s bond, foreign exchange, commodities, and derivatives clients. He is also serves on the Management Committee. Before joining Greenwich Associates in 1990, Frank was with Alliance Consulting and Gruntal, as well... view more