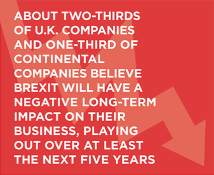 Brexit: For Companies and Banks, The Worst is Yet to Come

For European companies and banks, Brexit is like a looming hurricane, the severity of which remains uncertain.

Companies in the United Kingdom and on the Continent are battening down the hatches, fearing that although they’ve already felt the first effects, the storm itself has not yet made landfall.

Meanwhile, U.K. banks are bracing for the onset of what could be long-term headwinds brought on by the event, which many continue to be described as a selfinflicted injury—at least from an economic point of view—while others see it as an opportunity.

This report is not trying to predict the upsides and downsides of Brexit—too many economic analysts and pundits have gotten it wrong in the recent past already. What it does want to reflect, though, is the current sentiment of large corporates in the U.K. as well as on the Continent, also including the impact Brexit is having on the relationship with their banks.

You are invited to our Brexit Webinar September 18, 2019 Webinar with Tobias Miarka and Thomas Jacques.

We recently interviewed corporate treasury professionals in the U.K. and on the Continent about how the ongoing Brexit uncertainties are impacting their companies' businesses, operations and bank relationships.  Join us as we discuss the finding from our interviews with Corporate Treasury professionals:

Between May 30–July 8, 2019, Greenwich Associates conducted 61 interviews with treasury professionals at corporations with sales in excess of €500 million, of which 13 were domiciled in the U.K. and 48 on the Continent. Subjects covered included how the vote is impacting companies’ businesses, operations and bank relationships and how effective their banks have been communicating changes following the U.K. referendum.