The combination of macroeconomic volatility, slow economic growth, historically low interest rates, and further increasing know your customer (KYC) requirements has made for a tough market for corporate banks in Europe. However, in recent months these factors have also created valuable opportunities for banks capable of helping large companies navigate today’s difficult conditions by adjusting to market dislocations, avoiding the impact of negative rates and managing KYC provisions.

The 2020 Greenwich Share and Quality Leaders in European Large Corporate Banking are capitalizing on these opportunities to forge deeper relationships with the biggest companies in the region and—they hope—to create a source of revenue growth in an otherwise flat market by capturing business from rivals.

Topping the list of this year’s winners are BNP Paribas, which leads the market in penetration among large European corporates by a wide margin, followed by HSBC and UniCredit. Citi and Deutsche Bank round out the list of winners in a tie for the final spot. UniCredit takes the title of 2020 Greenwich Quality Leader in European Large Corporate Banking. 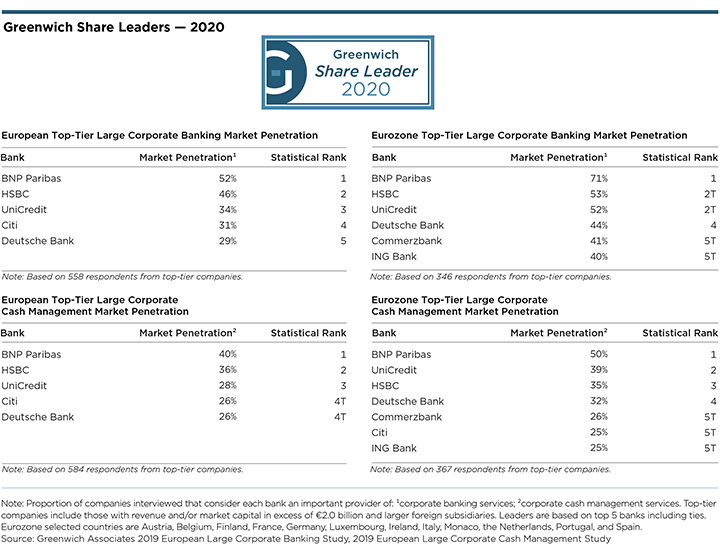 In October of last year, the World Trade Organization cut expectations for 2019 trade growth in half and sharply downgraded projections for 2020. In its statement, the WTO noted that even the lower 2020 projection was subject to significant downside risks in the face of the U.S.-China trade war, Brexit and other factors. The emergence of COVID-19 as a threat to global productivity and trade will likely further negatively impact growth.

Reduced trade growth sounds like bad news for corporate banks, many of which rely on companies’ need for services in support of international business as a key source of revenues. However, new data from Greenwich Associates shows that rather than contracting, corporate demand for cross-border banking services held steady or even increased modestly from 2018 to 2019—at least with regard to cross-border needs within Western Europe.

The resilience of corporate demand for cross-border banking services in the face of slowing global trade growth can likely be attributed to two main factors. First, at a time of limited economic growth in Europe, most large companies here face minimal prospects for growth within their home country markets and are pinning their expansion strategies on international markets. As a result, they are making long-term investments in foreign markets that, to this point at least, have not been curtailed by what they hope is a cyclical slowdown in trade.

Second, the same macroeconomic volatility that is cutting into global trade is triggering demand for cross-border banking services. For example, many large European as well as non-European companies shifted operations, at least partially, out of the U.K. in the face of Brexit. In many cases, those moves generated a subsequent shift into other countries in Western and even Eastern Europe. Likewise, companies around the world have been realigning supply chains in Asia in the face of the U.S.-China trade war and the prospect of additional dislocations. All of those moves require cross-border banking support.

For the most part, the biggest beneficiaries of this demand have been the biggest global banks, such as Citi, HSBC, BNP Paribas, J.P. Morgan, Bank of America, and Deutsche Bank, which are often the only providers with on-the-ground expertise and networks across all the countries in which a large company operates. However, when it comes to securing the support they need in a specific country or region, European companies are becoming more discerning. More than ever before, they are turning to banks viewed as specialists. For example, in cash management, almost half of large European companies employing a bank for cross-border services into Asia use HSBC. Within Western Europe, BNP Paribas is the clear cross-border cash management provider of choice, as is UniCredit for Eastern Europe.

“It’s becoming increasingly difficult and expensive to maintain an international banking platform across all regions,” says Greenwich Associates Managing Director Dr. Tobias Miarka. “We anticipate that even some of the largest global banks will narrow their strategic focus in the near future to specialize in regions and countries they see as being most attractive for their franchises.” 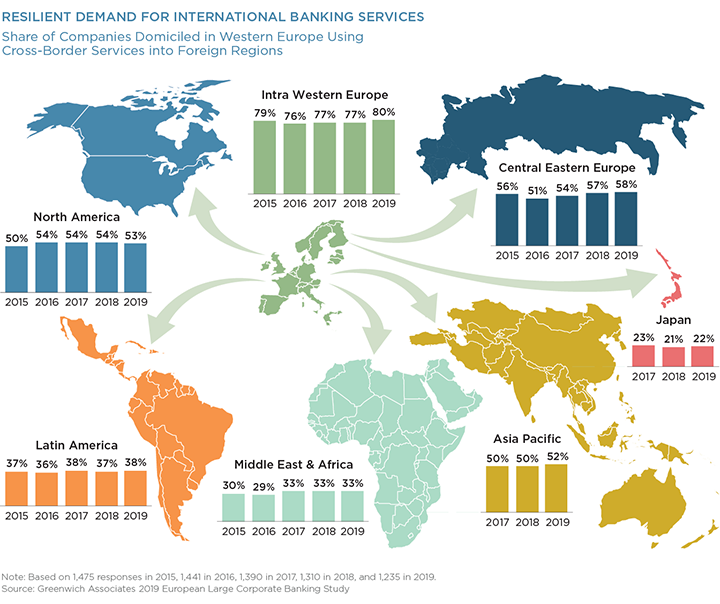 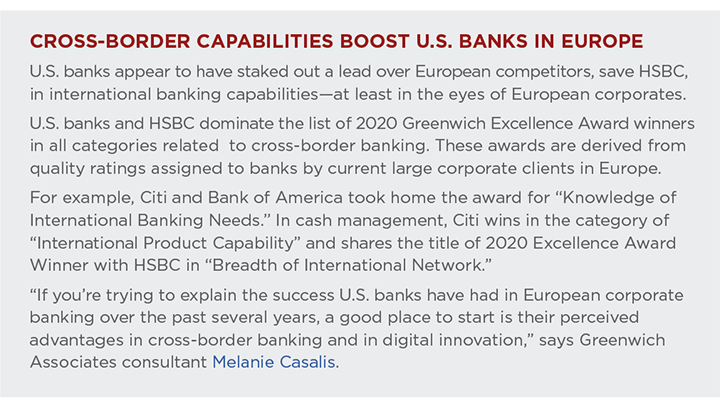 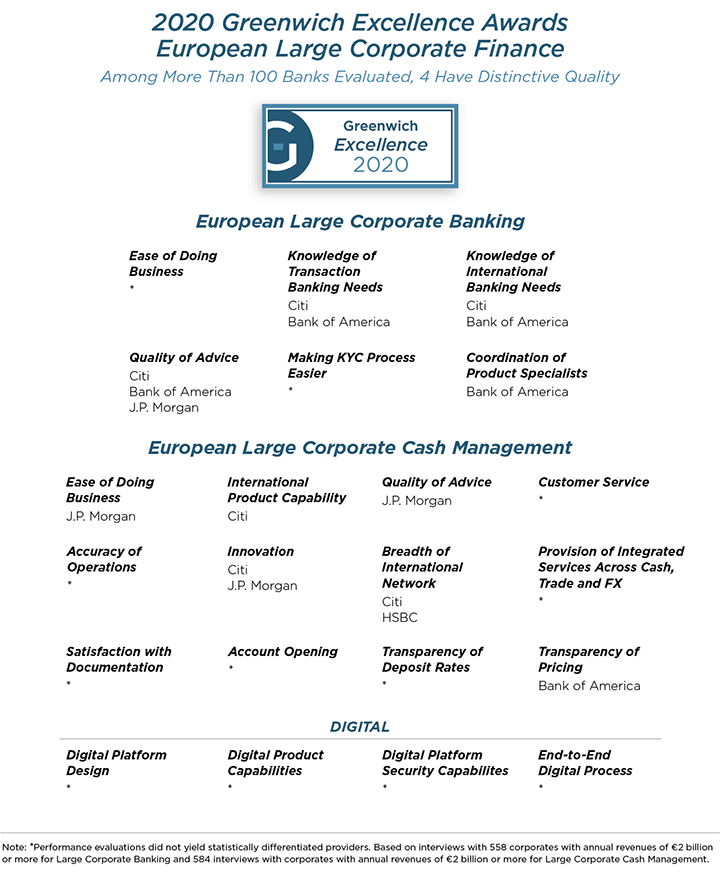 Minimizing the Impact of Negative Rates

When the European Central Bank first introduced negative interest rates, large European companies were largely insulated from the impact because many banks decided to eat the costs associated with holding cash deposits in the name of preserving client relationships. Generally, banks and companies alike expected negative rates would be a passing phase. Six year later, negative interest rates are the new normal. Banks are responding in different ways. In general, banks in the Nordic countries and the Netherlands have started passing negative rates on to clients. In other markets like Italy, many banks remain hesitant to impose these costs on clients whose relationships and businesses might be at risk.

As more companies are forced to incur costs associated with cash deposits, the ability to help clients avoid this new expense is emerging as a key skill for corporate banks. Companies are turning to banks with the expertise and technical skills in cash management to minimize or even eliminate any costs from negative rates. “This new environment is highlighting the capabilities of banks that have developed sophisticated, digital cash-management platforms capable of achieving the transparency and timeliness needed to zero out cash positions on an ongoing basis,” says Dr. Tobias Miarka.

Press coverage of innovation in the banking industry has long been dominated by headlines about “breakthrough” technologies—especially blockchain. Finally, after years of hype, that obsession seems to be fading. But that in no way means that innovation has slowed. On the contrary, it’s no exaggeration to say that technology is in the process of transforming corporate banking. In some cases, companies might not even see the new technology that is changing the way their banks work. That’s especially true with middle- and back-office digital tools and systems designed to streamline documentation and compliance processes. In other cases, companies work directly with innovations like digital cash management platforms and, increasingly, digitized credit processes.

In today’s low-interest-rate environment, companies have no shortage of options for credit. With so many banks and other providers competing for corporate business, credit provision has become “table stakes”—an offering that will get you in the game but provides no real advantage over others at the table. However, banks are finding that they can differentiate themselves from other credit providers by making their credit processes faster and more efficient. U.S. banks have led the way in the digitization of credit processes, although some European banks like BNP Paribas have also made significant strides.

The corporate banking industry’s progress on this issue last year can be attributed to some extent to concerns about fintech providers doing as they’ve done in retail: stepping in and stealing business with state-of-the-art digital processes that deliver fast and seamless credit decisions. “The good news for banks is that fintech credit providers haven’t had much of an impact in large corporate banking, at least not standalone without a partnership with corporate banks, so it appears the banks have gotten ahead of that threat,” says Greenwich Associates consultant Yoann Pasquer. “And the banks that moved first are finding that an efficient digital credit process represents a real competitive advantage over other banks.” 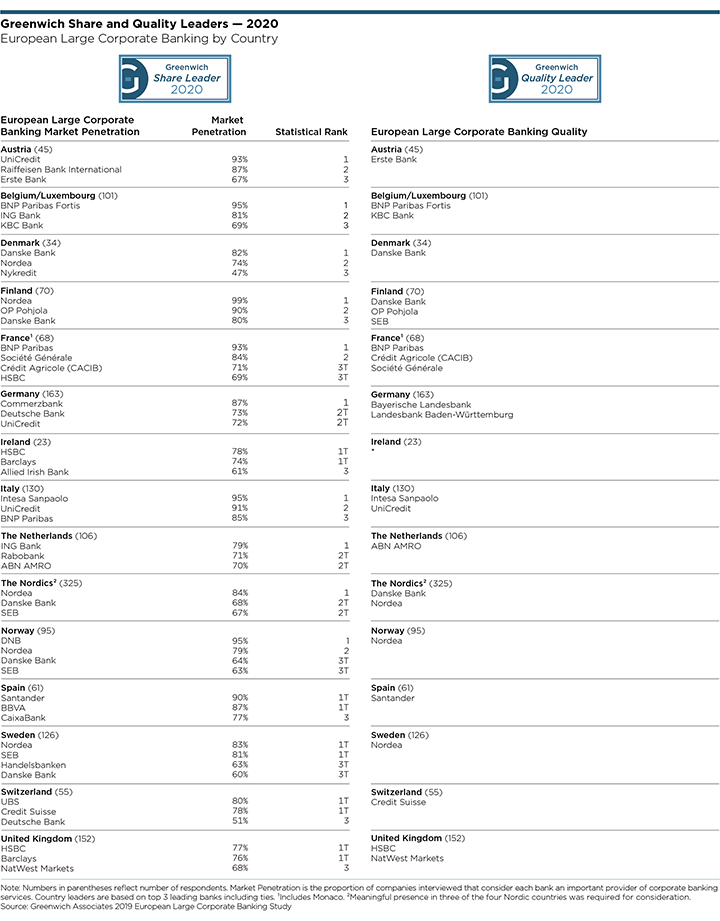 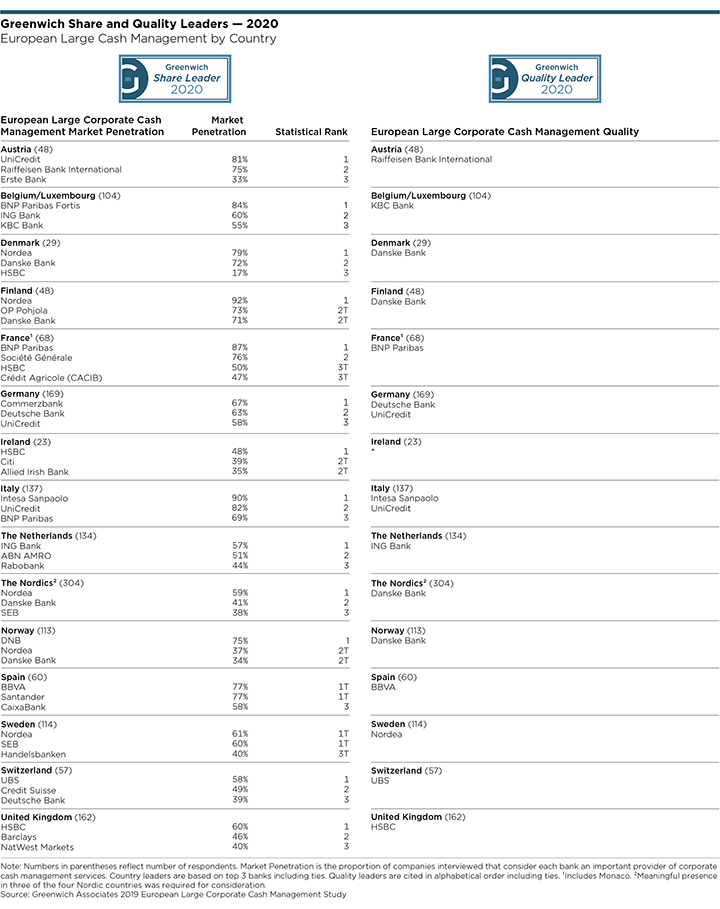