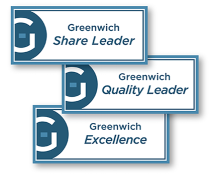 Companies and banks in the Nordics and the Netherlands could be leading the way toward a new and increasingly digital future for the European trade finance industry.

“Digitization” is a trend that always seems to be just over the horizon for European trade finance. All sides of the market agree that, eventually, most aspects of the business will be electronic. It just makes sense: Many of the frustrating and time-consuming headaches associated with the business can be minimized or even eliminated entirely through digitization.

That’s why it’s especially frustrating to see the slow pace of progress on digitization to date. Of course, banks like Citi, winner of the 2019 Greenwich Excellence Award for European Trade Finance Digital Platform, are making sizable investments to build out a digital infrastructure. And some companies are making use of these electronic platforms for a portion of their business. But these digital systems have yet to usurp traditional methods of conducting business by phone, fax, email, and in person.

Rather than focusing on shifting their trade finance transactions to electronic platforms, companies are concentrating on things that have an immediate, practical impact on their businesses—like pricing and the breadth and quality of banks’ international networks. Although they might realize that digitization will someday make the entire process easier, more transparent and efficient, companies also understand that potential is a long way from being realized.

In today’s market, a trade finance transaction can often only be as sophisticated as the least sophisticated counterparty, and digitization can only work if there’s some way to standardize all aspects of the process across all counterparties and jurisdictions. Knowing how far the market is from that scenario, most large companies are simply going about their business using the old standbys. In fact, when large European companies rank the criteria they use in selecting a trade finance provider, “quality of E-banking and digital platform” barely makes the list.

Leading the Way on Digitization

But there are signs of change. In the Nordics and the Netherlands, companies report a sizable decline in the usage of phone and fax in trade finance transactions and increased use of digital platforms. Across Europe, the majority of trade finance business is conducted manually, via phone, fax, in person, or by email—which in this case, generally means sending written documents as email attachments. Only about 42% of trade finance business is initiated and managed electronically. In the Nordic countries, companies initiate and manage nearly two-thirds of their business on electronic platforms, with just 11% conducted by phone, fax or in person and the remaining 25% done via email. The trend is similar in the Netherlands, where companies conduct an impressive 58% of their trade finance business digitally.

It’s hardly a surprise that companies in the Nordics and the Netherlands are leading the way. These countries have been early adopters of digital technology in consumer and retail markets, as well as in cash management and other corporate functions. Now, growing numbers of companies in these countries are using electronic tools to address common trade finance pain points—like the manual effort and paperwork required for contract creation, annoying communication and processing errors, and delays caused by anti-money-laundering procedures. Greenwich Associates expects companies in the rest of Europe to follow suit—sooner rather than later. 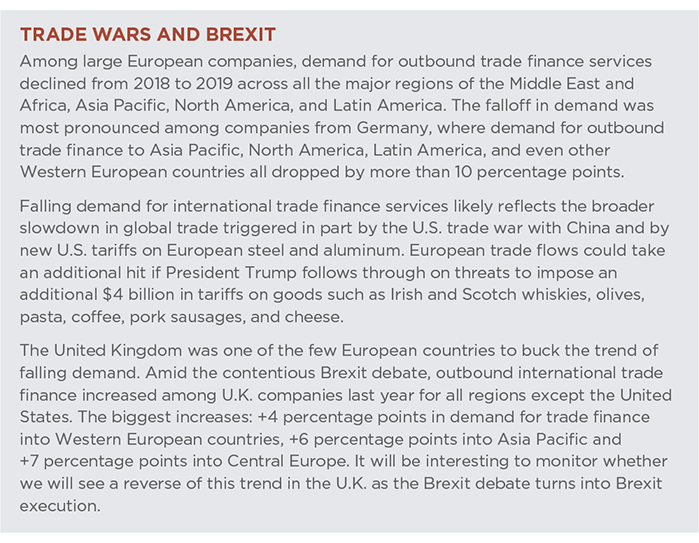 For banks, competitive pricing has become table stakes in trade finance. Aggressive pricing is virtually the only way to get a seat at the table, but because everyone else is pricing just as aggressively, it won’t gain you any real advantage. This is true even for the biggest and most well-resourced banks. Global providers struggle to charge a premium for robust advisory capabilities or other “value-added” services; they must compete on price along with everyone else.

So what differentiates banks that clear the pricing hurdle? Increasingly it’s their international networks. The quality and breadth of banks’ international networks is the top criterion considered by companies choosing a provider (pricing aside), and it is the only factor to have increased in importance over the past three years.

On the surface, companies’ emphasis on international networks would seem to be a major advantage for the biggest global banks. However, while globalized U.S. banks have made major inroads in the European market in corporate banking and cash management, the 2019 list of Greenwich Share Leaders℠ in European Large Corporate Trade Finance remains a strictly European affair, with BNP Paribas in the top spot, followed by UniCredit and then a tie between HSBC and Deutsche Bank. At the country/regional level, local and domestic providers dominate the lists of 2019 Share Leaders, with Commerzbank sharing the top spot with UniCredit in Germany, BBVA leading the field in Iberia, Intesa Sanpaolo securing top honors in Italy, and Nordea claiming the first place ranking in the Nordics.

The localized nature of the business also comes through in quality evaluations. Across Europe, UniCredit has secured the tile of 2019 Greenwich Quality Leader℠ in European Trade Finance. And at the country level, domestic banks usually take top honors, such as BNP Paribas in France, SEB in the Nordics, and Credit Suisse and UBS in Switzerland.

The continued strong performance of local competitors shows that unlike the case in cash management, it’s possible for even smaller banks to deliver the types of high-quality international networks companies are demanding in trade finance—provided they stick mainly to the plain vanilla transactions that make up the bulk of this business. Of course, international network is not the only thing companies are looking for from their trade finance provider. Companies are also seeking readily available credit, quick turnaround and flexibility on terms, and expertise and advisory capabilities. Over the past two years, corporate demand has also been on the rise for more complex and capital-intensive services in commodities and structured trade finance.

Banks have a strong incentive to excel across all of these areas because trade finance is increasingly becoming a winner-take-all game. Currently, companies’ No. 1 trade finance provider is capturing an average of 53% of the trade finance wallet. Despite that fact, companies continue to add new providers, bringing the average number of banks used up to 5.2 in 2019 from 4.7 in 2016. That means, on average, that four or more banks are competing for a share of the 47% of wallet not captured by the lead trade finance provider.

The following tables present the regional list of 2019 Greenwich Share and Quality Leaders in European Trade Finance, and the winners of the 2019 Greenwich Excellence Awards in five important categories. 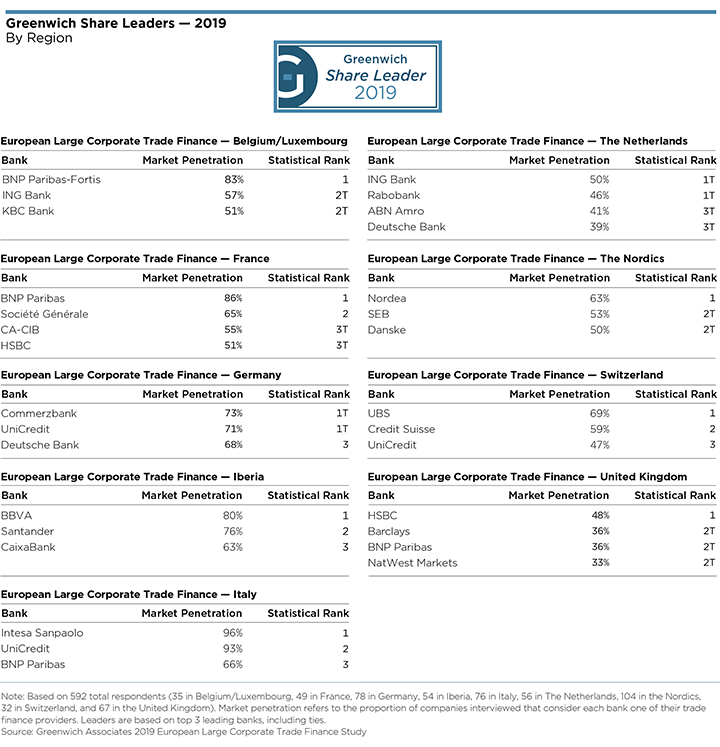 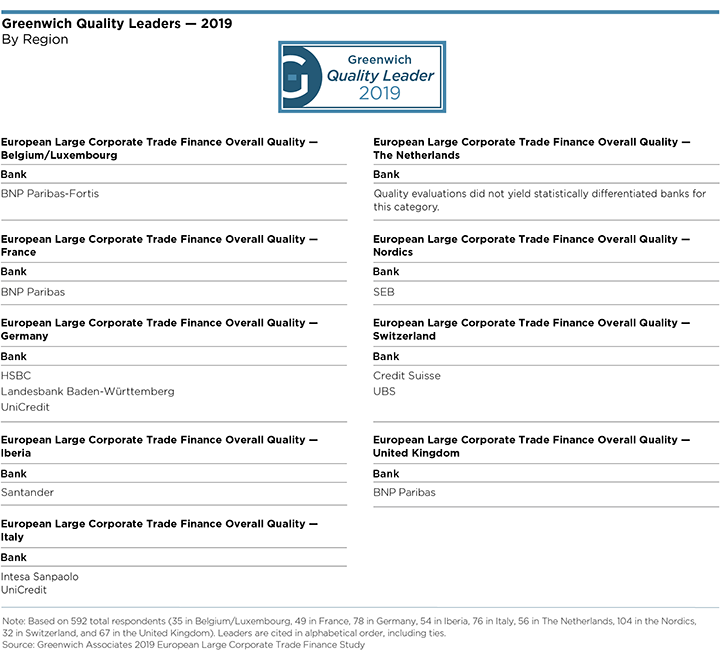 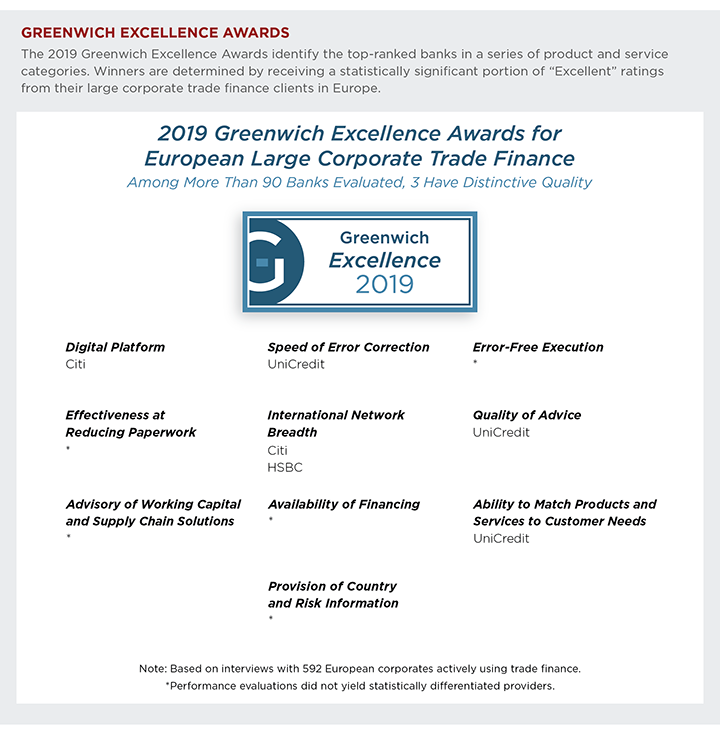