On September 17, 2018, the U.S. announced tariffs on an additional $200 billion in Chinese goods, increasing the total amount of impacted imports from China to over $250 billion. This has intensified trade tension between the world’s two largest economies and the volatility in global trade. While it remains too early to assess the exact impact on the world’s economy, trade disputes and new trade barriers are adding uncertainties for corporates worldwide and are likely to have an impact on the broader trade finance landscape.

In this paper, we’ll look at how geopolitical developments are affecting the trade finance industry in Asia, Europe and the United States, and unveil our list of 2018 Greenwich Share and Quality Leaders—the banks that are performing best in an increasingly volatile trade finance market.

Global trade volumes have experienced a steady upward trajectory since 2016, supported by solid economic fundamentals and strong business confidence. This growth momentum continued into the last 12 months as trade volume across Asia, Europe and the U.S. expanded. However, some leading indicators are starting to point to a gradual softening of growth going forward as trade conflicts escalate.

Around the world, large companies express strong concerns about the risk posed by trade wars and other potential events. In fact, of all the challenges and opportunities that may have an impact on trade finance, corporates in Asia and Europe most frequently mention geopolitical challenges. Short-term volatility and uncertainty are to be expected in the face of significant changes, and we see companies expressing concern about three potential impacts:

The role of banks will become increasingly open in this time of change, as companies shift their existing strategies regarding trade finance to weather out potential risks. A European study participant says his company is already feeling these effects, adding, “We have seen increased uncertainties related to global trade over the past year and became more focused on mitigating counterparty risk/exposure, getting prepayments from customers or using relevant trade finance products and services.” 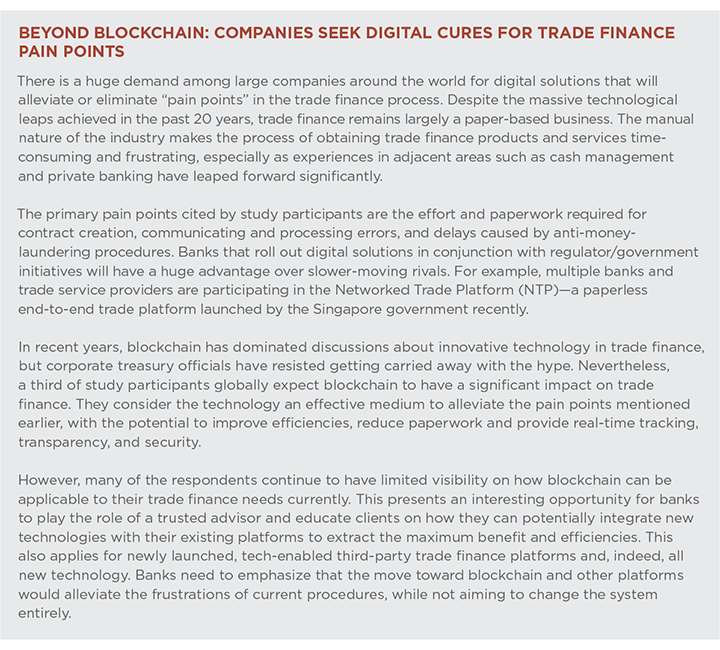 Fears of a U.S.-China trade war have caused Asian emerging market currencies to plunge this year—some to record lows. The prospect and now reality of new tariffs have also disrupted regional and global supply chains, as both suppliers and customers look for cost-effective solutions, often by shifting production from China to other Asian countries. In the short to medium term at least, this realignment of supply chains will produce winners for some markets, such as Southeast Asia, when companies relocate their manufacturing base. Over a longer period, a protracted U.S.-China trade war will have an even broader and potentially more durable impact: The growth of intra-Asia trade has been an important economic trend for at least the past five years. U.S. tariffs will provide Asian companies with an even bigger incentive to find new customers close to home.

It’s not yet clear what impact these changes will have on the availability and pricing of the trade finance products and services in Asia. In recent years, Asian companies have benefited from favorable conditions in trade finance.

Competition among an expanding group of aggressive banks has kept the supply level high and pricing low. The average number of banks used by large Asian companies leapt to 5.5 in 2017 from 5.1 in 2016—a much larger increase than is typically seen in any one region on a year-to-year basis.

Most of those new additions have been relatively minor players in the large corporate segment—banks that rank outside the top 20 in Asian trade finance. These include local Asian banks that are stepping up the quality of their platforms and increasing their penetration of the market with highly competitive pricing.

Downward pressure on pricing has prompted global banks and other leaders in this market to reassess strategies. Faced with declining margins, global banks are making “participation choices,” and opting to compete for business only when it makes sense from a profitability perspective. The preceding graphic shows the results of this process, which illustrates the shrinking footprint of the region’s top five banks and the rapidly expanding presence of local and smaller competitors.

But the biggest banks are not making a hasty or ill-considered retreat. To the contrary, they are electing to maintain and pursue clients that generate healthy margins. As evidence, although companies are using more banks, their lead bank still captures about 44% of their total business—similar to the year before. Global banks with broad international networks often hold those lead bank relationships. In other words, with the big corporate clients they elect to pursue, global banks and large regional competitors hold top relationships and capture a large and lucrative portion of that company’s business.

In this dynamic market, HSBC stands out as Asia’s most-used trade finance provider, followed by second-ranked Standard Chartered Bank, and BNP Paribas, Citi and DBS, which are tied for the third spot in terms of penetration of large Asian companies. The following table provides the complete list of 2018 Greenwich Share and Quality Leaders in Asian Large Corporate Trade Finance. 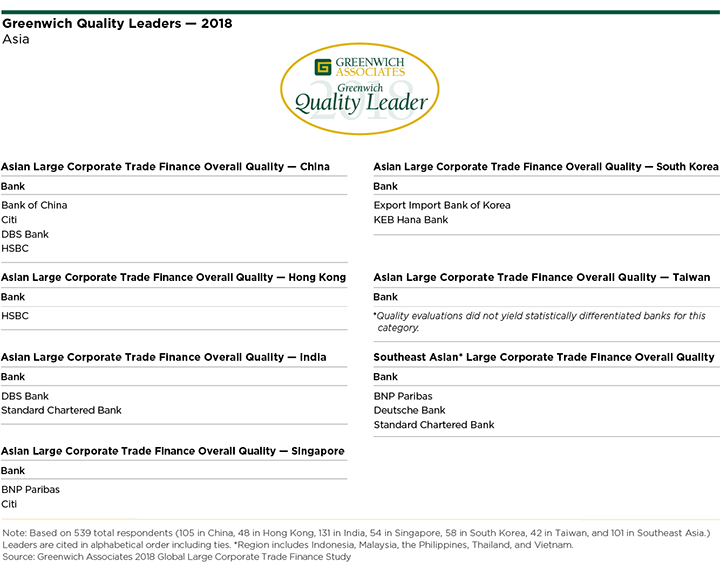 The share of European companies requiring the use of trade finance to support cross-border transactions remains largely stable for now. However, clients voice concern that this may change going forward with geopolitical challenges close to home, such as Brexit. Further afield, U.S. sanctions on Iran or Russia and tariffs affecting U.S.-Europe trade, clearly increase the level of uncertainties for corporates.

“The U.S. stance regarding the Iran treaty may have a negative impact on exports,” says a study participant representing a large Belgian corporate. A treasury official for a large German company says European companies are caught in a “sandwich position,” noting that “on the one hand we have the U.S. sanctions on Russia and Iran, on the other, the EU position to penalize European companies which adhere to those sanctions.”

Sanctions and sovereign risk are having a direct impact not only on overall trade volumes, but also on corporate demand for trade finance and other bank services:

“Due to sovereign risk in Turkey, there is a risk that our confirming banks will not have appetite or availability to confirm letters of credit,” says an Irish corporate treasury official.

“Sanctions become complex, resulting in different risk assessments by banks, different must-haves and nice-to-haves. Even within one bank, interpretation may differ between compliance staff members,” says a Belgian study participant.

“With foreign currency restrictions, how can invoices be paid? There are fewer and fewer banks in Germany that accept payments from Iran,” says the representative of a German company.

Caught in a mix of tariffs, sanctions and escalating geopolitical risks, European companies are shifting the focus of their trade finance programs. European companies that are using trade finance are increasingly employing it to manage counterparty risk (up from 44% of European trade finance users in 2017 to 51% in 2018) and sovereign risk (from 26% to 30%). An Austrian corporate treasury official says, “If country risk increases, you must work more closely with the banks.”

That demand for help managing sovereign and other geopolitical risks is increasing companies’ emphasis on factors like robust international networks and advisory capabilities when selecting their trade finance providers. The share of companies citing each of those factors as an important selection criterion for trade finance partners increased three and four percentage points respectively in the past year and will likely continue climbing. This could represent an important shift for banks, as companies gravitate toward trade finance providers with “boots on the ground” in multiple countries and away from smaller banks that provide credit and adequate trade finance coverage but lack the network required to gain true insights into foreign markets.

That trend could provide a boost to the biggest European banks, which already maintain a prominent role in the region’s trade finance market. The roughly one dozen global and pan-European banks based in Europe control nearly 60% of European corporate trade finance relationships. The large pan-European banks in particular possess a powerful combination: They have the resources to maintain broad international networks relevant for their European client base and fund innovation—especially in digital—and they also have dominant positions within their own home country or region, where they serve the role of “domestic champions.”

Thanks in large part to these advantages, these banks consistently outperform other European competitors in quality assessments from clients—although the gap has narrowed slightly in recent months. They also outperform U.S. banks, many of which have pulled back on pricing and availability of credit in Europe over the past 12 months.

Europe’s biggest banks will have one important advantage—at least in the year ahead. Fewer large European companies plan to shift their business among banks. The share of study participants planning to move wallet from one bank to another declined from 53% in 2016 to 43% in 2017 to just 40% this year. The biggest beneficiaries of this slowdown of “money in motion” will be the banks already leading this market. BNP Paribas tops that list, followed by UniCredit, Deutsche Bank, HSBC, and Commerzbank. The following tables present the complete list of 2018 Greenwich Share and Quality Leaders in European Large Corporate Trade Finance.

Geopolitical and trade policy uncertainties appear to have broken the steady upward trend in the number of large U.S. companies in need of trade finance to support cross-border commerce, but any fall-offs are relatively modest. The share of companies using trade finance for transactions into or out of Asia was essentially flat at 63% in 2018. Trade usage for the Middle East and Africa increased from 39% in 2017 to 42% in 2018. However, demand declined modestly in other major geographic regions outside the U.S. including transactions into or out of Western Europe (58% to 55%), Latin America (44% to 40%) and Central and Eastern Europe (41% to 36%).

In keeping with the softening of business volume, large U.S. companies cut back the number of banks used for crossborder trade finance, bringing the average number of providers down to 3.6 this year from 3.8 in 2017.

However, these reductions can’t be attributed entirely to reduced overall demand. To the contrary, U.S. companies are consolidating their trade finance with fewer banks—generally with major credit providers. Corporates have become less willing to move their trade finance business, and the concentration of their spending or “wallet” with their top three providers increased from 73% to 84%. This is limiting opportunities for other banks, increasing the importance of capturing lead banking positions with their large corporate clients, and demonstrating once again the importance of credit relationships in the fight for trade finance and other fee-based businesses.

The biggest beneficiaries of the ongoing consolidation trend are the largest corporate banks that already dominate the U.S. trade finance market. Bank of America Merrill Lynch, J.P. Morgan and Citi lead that list, followed by Wells Fargo and HSBC.

Asia
Based on 539 interviews with corporates with annual revenues of $500 million or more, across China, Hong Kong, India, Indonesia, Malaysia, the Philippines, Singapore, South Korea, Taiwan, Thailand, and Vietnam.

Europe
Based on 532 interviews with corporates with annual revenues of EUR500 million or more, across Austria, Belgium, France, Germany, Ireland, Italy, Luxembourg, the Netherlands, Nordic countries, Portugal, Spain, and the United Kingdom.

United States
Based on 166 interviews with corporates with annual revenues of $2 billion or more.