Despite tumult in the banking industry across Europe and notable changes in customer demand, German middle-market banking has been remarkably stable over the past three years —with some important exceptions.

The names and rank order of the top five banks to German middle-market companies in 2016 are identical to that of 2013. Roughly 63% of German middle-market companies do business with Deutsche Sparkassen, which leads the market in 2016. Commerzbank is second with a market penetration of approximately 50%, followed by Deutsche Bank at 31%, Volksbanken und Raiffeisenbanken at 28%, and UniCredit at 23%. These banking groups are the 2016 Greenwich Share Leaders℠ in German Middle Market Corporate Banking.

One reason for the market’s stability: Middle-market banking relationships in Germany are extraordinarily durable, averaging roughly 25 years in length.

These low turnover rates are reflected in the stable market penetration scores of most of the top five banks. The one exception is Deutsche Bank, which has seen a decline in total relationships from 40% in 2013 to 31% in 2015.

“Deutsche Bank’s decline reflects its well-publicized challenges over the period,” says Greenwich Associates Managing Director Dr. Tobias Miarka. “But we believe the setback will be temporary.

Looking ahead, the growing internationalization of German middle-market companies’ businesses and changes in companies’ demand for banking services play directly to Deutsche Bank’s strengths as a global provider.” 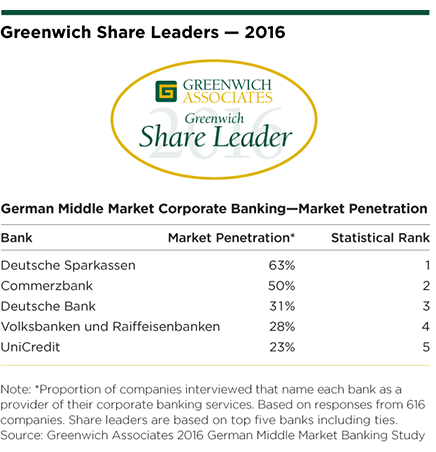 Based on feedback from the middle-market companies participating in the study, all of these top five banks are positioned to win new business in the months ahead. In the case of the market’s top two banking groups, Deutsche Sparkassen and Commerzbank, companies are inclined to award them additional business due in part to the “ease of doing business” with these providers.

Accolades in this area are no surprise with Deutsche Sparkassen, given the very long and close relationships between the bank and local companies that make up its client base. More surprising are the strong scores in this metric for Commerzbank, which seems to be benefiting from its commitment to create greater autonomy in decision-making at the local level. 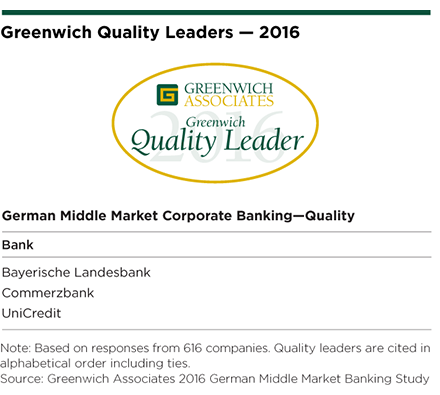 For its 2016 study, Greenwich Associates interviewed 616 financial officers at corporations and financial institutions in Germany with sales between €50 and €500 million.  Participants were asked to detail their usage of specific products, to name their banking providers and to rate the quality of service delivered by providers in a variety of products and services. Banks with client ratings topping those awarded to competitors by a statistically significant margin were named Greenwich Quality Leaders.

Bayerische Landesbank secured its spot on this list primarily due to superior ratings for overall institutional quality—a measure bolstered by strong relationships between bank senior management and companies in the local markets it serves. Quality scores for Commerzbank and UniCredit, on the other hand, are driven in large part by the ability of their relationship managers to meet the needs of companies’ growing international businesses.

Factors relating to cross-border trade are taking on more importance among middle-market companies when selecting banks. Every year, Greenwich Associates asks companies participating in its global banking studies to cite the criteria they use in choosing their main banks. From 2013 to 2016, a growing share of companies named trade services/trade finance and strong international networks as influential selection factors. Business owners and executives are also paying more attention to foreign exchange as middle-market companies continue to expand their businesses beyond EU borders.

Going forward, other pan-European and global banks should also benefit from their ability to provide expertise in products that support international business. With traditional banking staples like cash management becoming increasingly commoditized, a bank’s ability to provide advice in international markets, transaction banking and other areas is likely to become an even bigger point of differentiation. 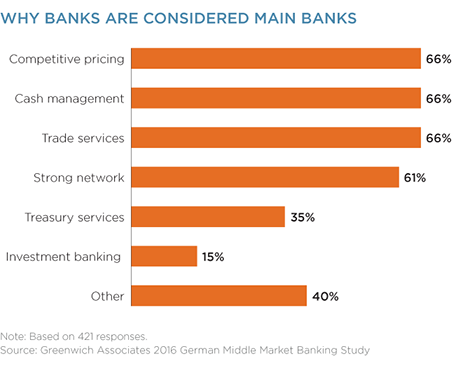 In the wake of Europe’s banking crisis, companies became reluctant to share their strategic thinking with their banks. However, relationships between companies and banks have been improving, and as they do, companies are becoming more willing. In 2013, only 56% of the customers of the market’s top 10 banks said they were sharing their strategic thinking with their banks. In 2016, that share climbed to nearly two-thirds.

Credit Provision and the Challenge of Negative Interest Rates

Deutsche Sparkassen and Commerzbank are the banking groups used most often by middle-market companies for credit. “Meanwhile, UniCredit stands out as the unique provider that achieves strong quality ratings with relatively low penetration among middle-market companies as a lender,” say Dr. Tobias Miarka.Although credit provision will always be a key factor in middle-market banking relationships, its influence at the moment is on the wane. On average, German middle-market companies have drawn down only 37% of existing credit lines, leaving them with significant amounts of untapped capacity.

With uncertainty about the economy limiting corporate investment, demand for additional credit is likely to remain low. In fact, the larger question for many companies is what to do with sizable cash holdings in an era of negative interest rates. “The big issue for banks will be how their middle-market clients react when told the bank will begin charging them to hold their cash deposits,” says Dr. Tobias Miarka.

Greenwich Associates conducted interviews with 616 financial officers (e.g., CFOs, finance directors and treasurers) at corporations and financial institutions in Germany with sales between €50 and €500 million.

Interviews took place from December 2015 through February 2016 . Participants were asked to detail their usage of specific products, to name their banking providers and to rate the quality of service delivered by providers in a variety of products and services.