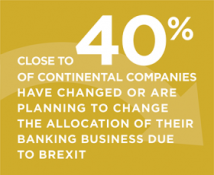 While Europe’s political class is still debating what actually occurred in the U.K.’s June referendum on exiting the European Union and what this result will mean for the future of Europe, business leaders in the United Kingdom and on the Continent do not have the luxury to “wait and see.” They have been directly exposed to the effects of the U.K. vote from day one, with no opportunity to hide.

As corporates began to grapple with this post-Brexit headache, Greenwich Associates interviewed senior executives at large companies in the U.K. and the Continent to better understand how the Brexit vote is impacting their businesses and strategies. The fact that 60% of the Continental companies participating in the study have operations in the U.K. underscores the close integration of large European corporates across the two regions.

Between July 12–27, 2016, Greenwich Associates conducted 128 interviews with treasury professionals at corporations with sales in excess of €500 million, of which 35 were domiciled in the U.K. and 93 on the Continent. Subjects covered included how the vote is impacting companies’ businesses, operations and bank relationships and how effective their banks have been communicating changes following the U.K. referendum.