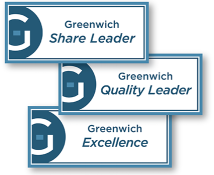 Large companies in Asia are turning to the biggest banks in the region for support as they navigate disruptions caused by the U.S.-China trade war. In some cases, that means passing on lower-priced providers of trade finance and other services to get access to big banks’ international networks and expertise—a trend that is likely to benefit the 2019 Greenwich Share Leaders℠ in Asian Large Corporate Trade Finance.

For the past decade, the story in Asian trade finance has been the same: New, aggressive providers have been flooding the industry, creating a buyer’s market in which companies can shop for rock-bottom pricing. With the onset of global trade wars, however, large Asian companies are realizing the value of premium service and advice—a shift that is likely to benefit large banks with extensive networks throughout Asia and the rest of the world.

As recently as 2011, nearly half (46%) of large Asian companies used one of the market’s top five banks for trade finance. As the business became more crowded and commoditized, that fell to just over a quarter (27%) in 2018. That lost business flowed not to the market’s second tier of trade finance providers, but rather to a group of banks ranking outside the top 20 in 2011. That group included local Asian banks, aggressive competitors from Japan and several niche European providers—all of whom were forced to compete hard on pricing to win business. 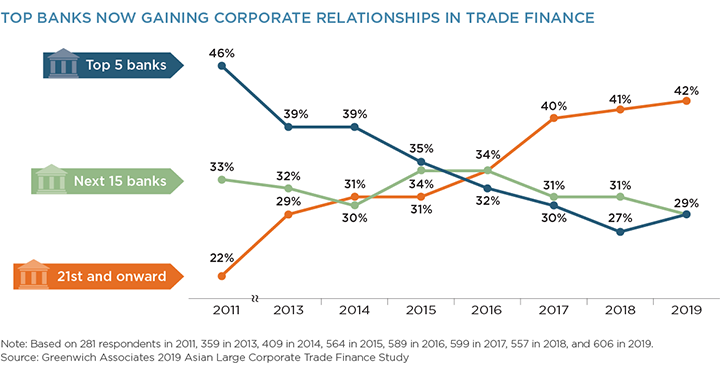 However, that seven-year losing streak for the biggest banks came to an end last year, as the share of large companies reporting that they use at least one of these large providers for trade finance climbed to 29% from 27%.

In terms of operational challenges, large Asian companies say geopolitical tensions are increasing production costs, limiting access to important markets and forcing them to realign supply chains. As one corporate treasury executive explained, “Depending on the respective policies and regulations [coming from the U.S.-Sino trade war], we need to make adjustments to our transactions. This would include altering our services, suppliers or even changing our overseas ports of shipment.”

The wild currency swings triggered by the trade war are causing real disruptions. “Our company purchases raw materials in USD (from Southeast Asian countries), which are then shipped to our facilities located in China for the manufacturing process,” says one corporate official. “Since our business has exposure to FX fluctuations, the instability in exchange rates impacts our cost of production.”

Finally, companies report that with the trade war in full swing, banks are imposing stricter requirements on Asian companies. “KYC (know your customer) processes have become more rigorous as banks have become more cautious and careful in evaluating risks,” adds one study participant.

Roughly half of the large Asian companies participating in our study said that they see geopolitical tensions impacting their trade patterns/financing. Companies need help with these issues, and—although most companies use up to a dozen banks, on average, for trade finance alone—they are turning to a handful of the region’s leading banks to get it.

While companies still name pricing and risk appetite as the top criteria they use in selecting a documentary trade provider, these factors are increasingly viewed as “table stakes.” What differentiates providers is a bank’s ability to provide higher-value service, like advice and support in supply chain management and other areas. One corporate treasury official participating in the study said his company has chosen to use one of the region’s top five banks for trade finance because, “They’re quite strong in Vietnam and our supply chains are shifting.”

This is a common theme. The new tariffs are forcing companies around the world to reroute supply chains. They are also prompting many Chinese companies to seek locations for new production facilities and new customers for their products. In all these cases, banks with broad networks can play an instrumental role in both finding the right locations and partners, and helping companies finance and execute these changes. One study participant says his company was drawn to a top five bank because, “We will need their ‘on the ground’ network as things change.”

Asia’s biggest banks recognize this trend and are positioning themselves to capitalize on it. Of course, possessing a robust network across Asia is not enough. Banks must have the talent and internal processes to exploit their intra-Asian and global networks to deliver value to their corporate clients in the form of advice, specific introductions and recommendations, financing, and other forms of support.

All of the 2019 Greenwich Leaders in Asian Large Corporate Trade Finance have risen to that challenge in one way or another. Indeed, when asked which banks they would most likely call on for cross-border referrals/account opening if trade patterns continue to change, companies often cited HSBC, Citi, Standard Chartered, BNP Paribas, and DBS—exactly the banks that make up the list of this year’s leaders.

The ability of these leading banks to leverage their strong network capabilities and deep relationships to help large Asian companies deal with challenges posed by geopolitical events will become even more important if the trade war persists and tariffs remain in place or even multiply. Given the seemingly low odds on a quick resolution to the standoff between the United States and China, Greenwich Associates believes we are likely to see these global banks continue to gain at the expense of local peers. 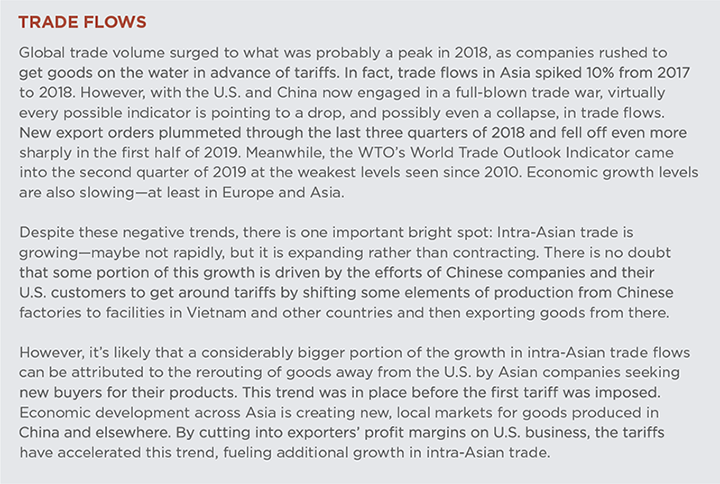 Large Asian companies say the demands of the mostly manual, paper-based processes used in trade finance are a real pain point for their treasury departments.

About 40% of Asian trade finance contracts are still executed by phone, fax or in person. Approximately another third of the business is conducted via e-mail, which ultimately represents nothing but a faster way of exchanging paperwork.

Only slightly more than a quarter of the business is executed digitally, online or through providers’ electronic platforms. This share lags that seen in the U.S. and Europe in large part because of the fragmented nature of the “Asian” market, which is really just an aggregation of separate country markets with their own regulatory regimes, compliance standards and documentation requirements. Although regulators in Hong Kong and Singapore are working to create standardized platforms for trade finance, these efforts are still mainly internal, with little cooperation between and among jurisdictions.

Nevertheless, large Asian companies are optimistic. More than 80% of the corporate treasurers and finance managers participating in the 2019 study see trade finance becoming more digitized. Respondents say digitization will have the biggest and earliest impact in the area of documentation, followed by initiation of trade and payments/settlement.

Technology could potentially have a more sudden and disruptive impact on the business. Nearly 45% of study participants say they have been approached by at least one bank about new trade finance solutions incorporating APIs, fintech innovations and/or blockchain.

Banks are aggressively looking for ways to digitize the “paper-driven” nature of trade finance, and we are gradually beginning to see more use cases in Asia. However, we are still far away from the “fully digital” scenario until we can achieve the harmonization of standards and frameworks across different jurisdictions. 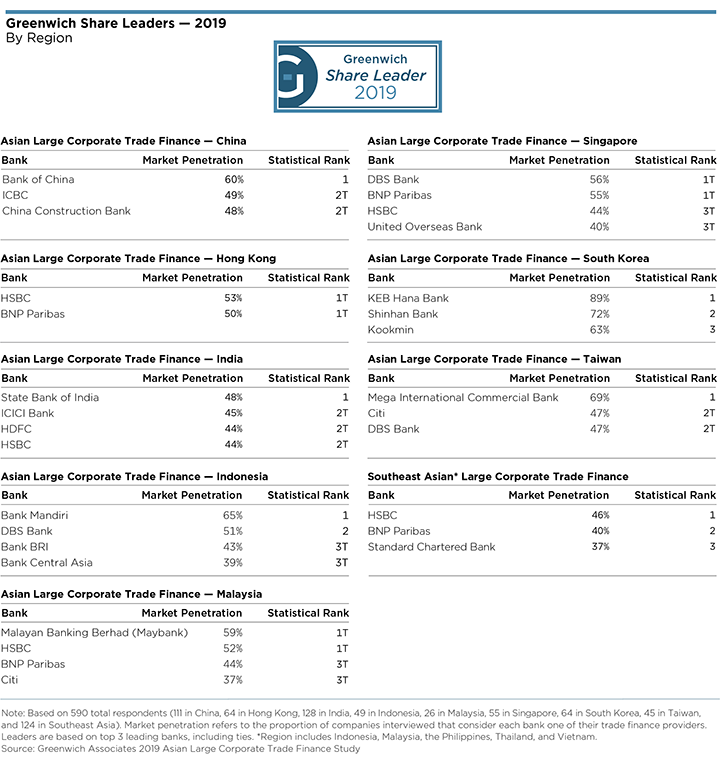 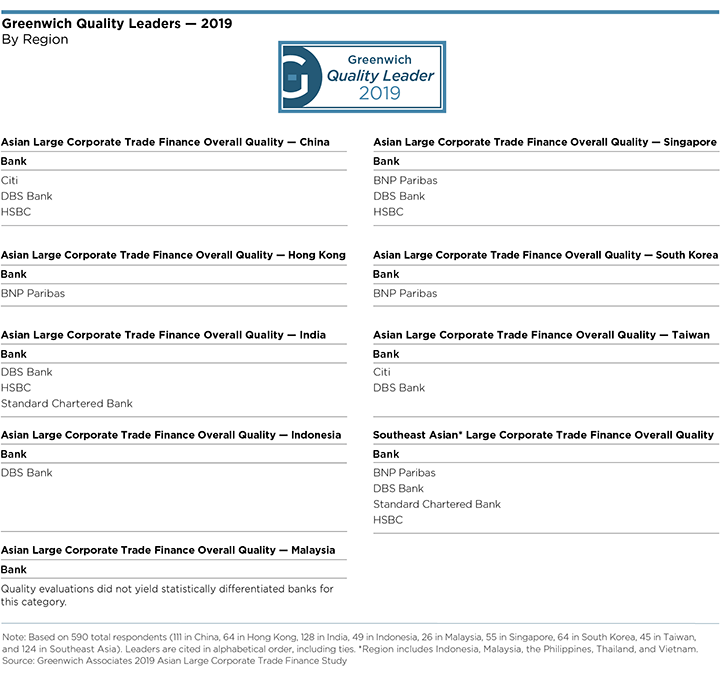 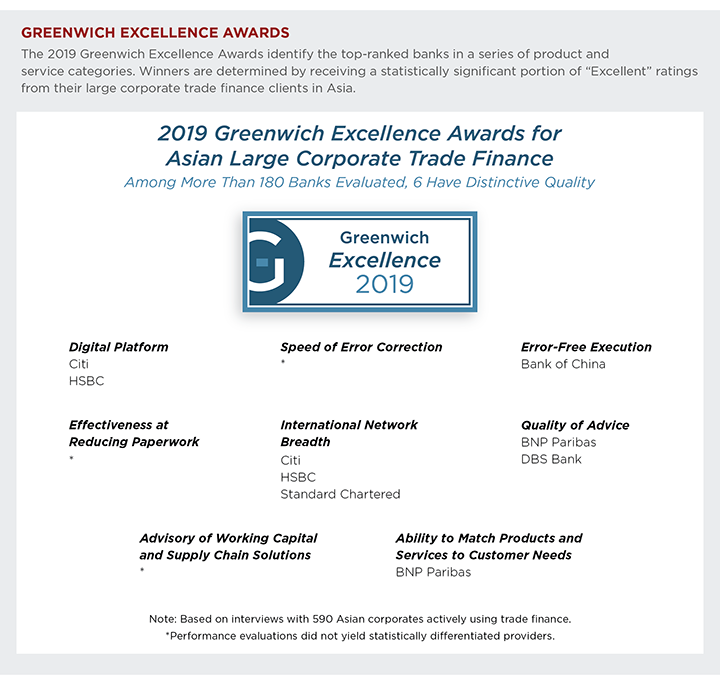