The theme for the European corporate banking industry this year is “money in motion.”

Over the past 12 months, relatively large numbers of companies have changed banks, and a surprising 39% of large companies express a strong willingness to switch banks in the year ahead—be it by way of re-allocating wallet within the banks they are already using or allocating some of their banking needs to a provider that is new to their banking group.

This activity is having a significant impact on the businesses of banks that have secured spots as Share and Quality Leaders in the Greenwich Associates 2016 European Large Corporate Banking Study. 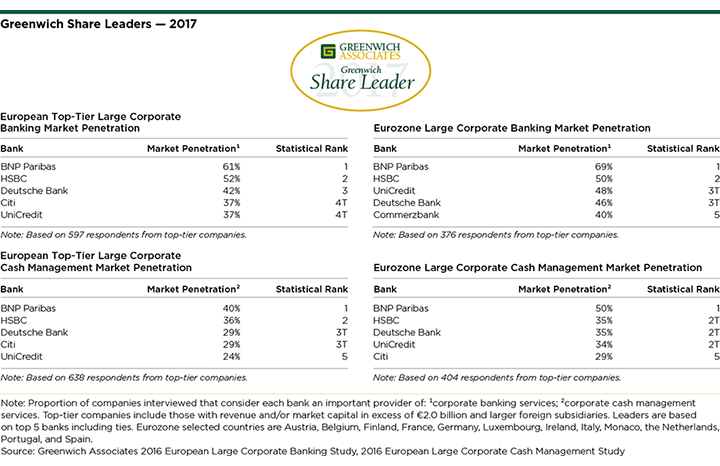 These unusually large shifts are the result of several powerful trends. First, the market is still sorting out the effects of the RBS retrenchment—a strategic move that left many companies in search of new banking relationships, especially on the transaction banking side. Although the biggest impact from that event came in 2015, the market is still working through the pullback by one of its formerly most important players.

This is the case particularly in the Netherlands and other countries in which the former RBS had a significant footprint. Companies seeking to fill the resulting gaps in their banking lists are creating opportunities for local players. However, due to the international scope of their businesses, many of these companies are turning to international banks—including competitors from the United States.

Second—and more relevant to the direction of the industry in 2017— the rest of Europe’s largest banks continue to operate under severe capital constraints. These pan-European players are thereby forced to rationalize their allocation of capital and other resources. “As part of this process, they are taking a close look at each and every client relationship and making a determination as to whether future profit potential warrants a continuation of that relationship in its current form,” says Greenwich Associates Managing Director Dr. Tobias Miarka.

This process is playing out at a time of uneven economic performance and different levels of political stability across Europe. As a result, banks facing hard choices about where to allocate capital are in many cases electing to reduce their commitments to countries with weaker economies and higher political uncertainty, such as Italy or France. Meanwhile, in countries with strong economies and a more stable political setting, such as Germany, banks are competing fiercely for corporate relationships.

In this tumultuous environment, BNP Paribas has taken a firm hold of the top spot in European large corporate banking. BNP Paribas’ 61% market penetration score tops the 52% achieved by No. 2 HSBC and third-place Deutsche Bank at 42%. Citi and UniCredit are tied for the No. 4 position, with market penetration scores of 37%. These firms are the 2017 Greenwich Share Leaders in European Top-Tier Large Corporate Banking. The 2017 Greenwich Quality Leaders in this category are BNP Paribas, Citi, ING Bank, and UniCredit.

In Germany, 84% of large companies use Commerzbank for corporate banking, ranking it first in the market. In second place with a market penetration of 76% is Deutsche Bank, which has been largely successful in defending its market position both in Germany and in other European countries amid some well-publicized challenges.

Due to its shaky economic outlook, France has not been an attractive market for Europe’s large corporate banks. As a result, non-French banks have become much more selective in competing for clients and allocating capital, leaving many client relationships to domestic French banks. With a market penetration score of 96%, BNP Paribas is by far the leader, followed by Société Générale at 81% and CA-CIB at 71%. BNP is particularly valued by corporate clients here for its advisory capabilities.

Société Générale, meanwhile, has been building out its own capabilities—particularly in transaction banking. Reduced competition from international banks has created fresh opportunities for smaller, domestic banks—many of which French companies rate highly for quality of service. In Italy, Europe’s biggest banks are pulling back, at least selectively, opting to reallocate capital to countries with better economic prospects. This shift is opening opportunities for local players like Intesa San Paolo, which leads all competitors in the country with a corporate banking market penetration of 95%. UniCredit, which ranks second with a market penetration of 92%, is also benefitting from this trend. BNP Paribas ranks third with a market penetration score of 79%.

If this year’s theme for European corporate banking is “money in motion,” the theme for European corporate treasurers is “cash in question.” The corporate treasurers participating in this year’s study state that cash management is far and away their top priority for the year ahead. The most immediate and pressing question facing corporate treasury departments is where to park cash in an era of negative interest rates. Treasurers are also wrestling with the long-term question of how to upgrade their internal systems to increase efficiency and make them compatible with new digital platforms for treasury, cash management and trade finance.

In this challenging environment, BNP Paribas has established a clear lead in large corporate cash management, with a market penetration of 40% across Europe. HSBC is second at 36%, followed by Deutsche Bank and Citi, which are tied at 29%, and UniCredit at 24%. These banks are the 2017 Greenwich Share Leaders in European Top-Tier Large Corporate Cash Management. The 2017 Greenwich Quality Leaders are Citi, ING Bank and UniCredit.

Also weighing on the minds of corporate treasurers are prospects for increased volatility in Europe’s financial markets and economies. At the top of the list of macroeconomic variables is Brexit. Although Brexit has not yet had a major impact on either the business or banking relationships of most large European companies in the study, corporate treasurers, CEOs and other executives are doing their best to prepare their firms for whatever comes next. Other question marks for the business environment include upcoming elections in France and the impact of the new Trump administration in global trade and other areas.

Risks posed by these factors and the ongoing challenge of managing cash in a negative rate environment are creating a significant opportunity for banks looking to win or deepen relationships with companies across the region. With companies spending 25–30% of their time managing bank relationships and financing activities, banks that can offer advice and guidance will find open doors. “Corporate treasurers should be looking to their banks for counsel and solutions to these pressing problems,” says Greenwich Associates Vice President Melanie Casalis. “Banks with strong advisory capabilities now have a good opportunity to deepen relationships.”

Greenwich Associates conducted 2,540 interviews with financial officers (e.g., CFOs, finance directors and treasurers) at corporations and financial institutions with sales in excess of €500 million, including 1,176 with sales of at least €2 billion.