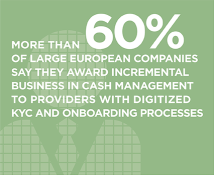 Among the myriad ways the COVID-19 crisis will reshape the global economy, the pandemic could alter the trajectory of the European corporate banking market. The crisis represents a true test, not only for Europe’s domestic banks, but also for the U.S. competitors that have made such strong inroads into this industry over the past decade.

With European banks under strain from the far-reaching economic impact of the pandemic, U.S. banks could have an opportunity to solidify their position and win new relationships with large European companies. To do so, however, they will have to prove their commitment to the region by stepping up with their balance sheets to help European companies through the crisis. If, on the other hand, the economic contraction forces U.S. banks to retrench, European banks—even as they struggle with the financial consequences of the crisis—could capitalize on their role as longtime credit providers, facilitators of state-sponsored economic relief programs, and domestic liquidity management partners to revitalize relationships with Europe’s biggest companies.

Greenwich Associates conducted 1,235 interviews with financial officers (e.g., CFOs, finance directors and group treasurers) at corporations and financial institutions with sales in excess of €500 million, including 558 with sales of at least €2 billion. An additional 1,272 interviews were conducted with corporate decision-makers for cash management, mainly treasurers.