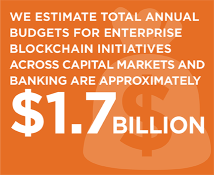 Blockchain, also known as distributed ledger technology (DLT), stormed onto the financial services scene a few years ago, due to its potential to solve a number of real-world problems in financial markets, such as shortening the settlement time, reducing operational costs and streamlining business processes. Hundreds of millions of dollars have been invested into initiatives trying to apply the technology across various use cases.

Blockchain became an accepted part of the financial services lexicon in 2015, as one company after another announced they were building a solution leveraging the technology.By 2016, Greenwich Associates estimates showed that the industry was spending $1 billion annually on distributed ledger technology projects.

As enthusiasm evolved into hype, 4 out of 5 executives involved in the technology predicted it would have meaningful impact within two years.

Early feedback from proofs of concept (PoCs) indicated that the technology indeed showed promise in solving some of the big problems in financial services—streamlining operations, shortening settlement time, and reducing risk and cost of capital. This study finds that many firms have moved beyond the PoC stage.

Indeed, 14% now claim to have successfully deployed a production blockchain solution. These successes notwithstanding, blockchain technology has yet to achieve those lofty expectations.

In our latest research, we explore the current state of blockchain adoption, continued investments by market participants and key challenges and expectations for the future.

During February and March 2018, Greenwich Associates interviewed 213 global market participants working on blockchain technology to assess the current state of blockchain adoption in capital markets. Respondents include representatives from a broad array of organization types, 93% of whom are either key decision-makers or actively involved in blockchain initiatives.