Amid the many changes in regulations and technology unfolding in global fixed-income markets in 2016, one thing remained the same: Citi is at the top.

With a market share topping 10% across all fixed-income products around the world, Citi ranks as the number-one dealer on the list of 2016 Greenwich Share Leaders in Overall Global Fixed Income.

Citi has achieved its current position of leadership through strength in both Rates and Credit products. In Rates products, Citi is tied with Goldman Sachs as the leading dealers in global market share, followed by J.P. Morgan. Citi holds the top spot on its own in Credit products, followed by J.P. Morgan with Bank of America Merrill Lynch and Barclays tied for third. 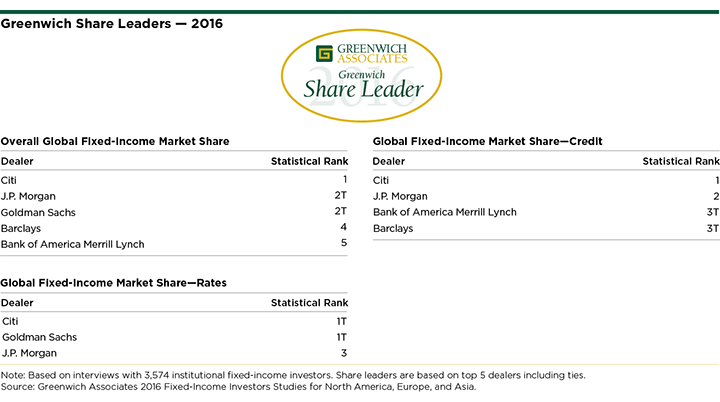 In 2016, Greenwich Associates interviewed over3,500 institutional investors globally. Investors were asked to name the dealers they use for specific fixed-income products in each major market, and to rate the quality of service these dealers provided. Dealers receiving quality ratings topping those of competitors by statistically significant margins are named Greenwich Quality Leaders.

Americas
Between February and May 2016, Greenwich Associates conducted in-person interviews with 104 institutional fixed-income investors in Canada, 1,302 in the United States and 168 in Latin America.

Interviewees may be asked about their use of and demand for financial products and services and about investment practices in relevant financial markets. Greenwich Associates compiles the data received, conducts statistical analysis and reviews for presentation purposes in order to produce the final results.