Australia’s fixed-income market is starting to find its new footing, following much-publicized restructurings among some of the country’s major banks. One of the biggest outcomes of that shake up has been a renewed focus among these leading banks on their domestic market.

Amid these shifts, ANZ Bank has retained its position at the top of the list of 2017 Greenwich Share Leaders℠ in Overall Australian/New Zealand Fixed Income. In the second spot, Citi and UBS are tied with National Australia Bank. “Over the past 12 months, National Australia Bank has notched significant gains in market share in both Rates and Credit products,” says Greenwich Associates Managing Director James Borger. “Among global banks, Citi has made significant progress in this market over the past year as well.”

Behind these banks is a four-way tie among Commonwealth Bank of Australia, Deutsche Bank, Westpac Banking Corp., and J.P. Morgan. 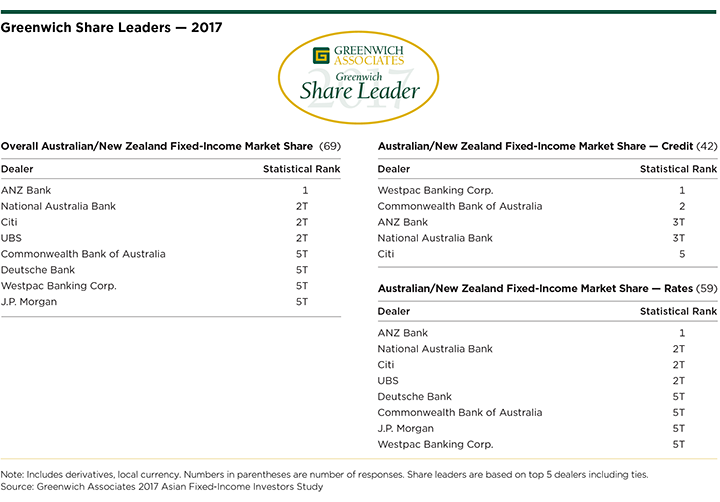 “While the four Australian majors have made gains or maintained their market share, a number of global banks have taken calculated decisions to be less active in balance-sheet-intensive rates and credit products,” says Greenwich Associates consultant Parijat Banerjee. “This is driven by stronger balance sheet availability for the four majors and a lower propensity to compete against this for some global banks that want to maintain focus on the bottom line. Among the globals, UBS and Citi have bucked this trend.”

In Australian/New Zealand Credit, domestic Australian banks dominate the top rank of dealers. Westpac Banking Corp. is first, followed by Commonwealth Bank of Australia, then the duo of ANZ Bank and National Australia Bank, which are statistically tied in third place in terms of market share, and finally the one foreign bank to make the list, Citi.

The market for Australian/New Zealand Rates is more crowded. ANZ Bank is first, followed by a three-way tie among National Australia Bank, Citi and UBS, and in fifth place, a four-way tie among Deutsche Bank, Commonwealth Bank of Australia, J.P. Morgan, and Westpac.

To date, global banks have controlled the bulk of the business of exporting Australian/New Zealand fixed-income product to offshore investors—mainly to a number of real-money institutions in the United States, Europe and Japan that buy and hold Australian product within their portfolios. Citi and UBS have been the leaders in this business. Deutsche Bank and J.P. Morgan are strong in exporting to Europe, and Nomura and Mizuho have found success in Japan. Some of the major Australian banks have demonstrable ambitions to win parts of this business where profitable. ANZ Bank, with a relatively stronger global footprint, has been the most successful here, followed by Westpac. 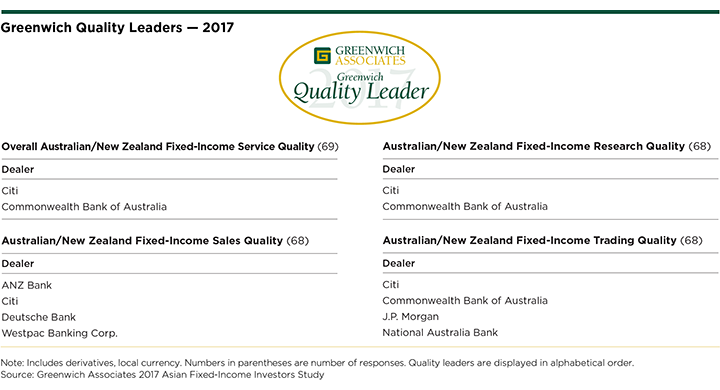