It was hard for foreign exchange (FX) dealers to make money in 2017. In retrospect, perhaps that extended period of frustratingly slow market activity was just the breather banks needed to get their FX desks prepped and ready for the sudden reappearance of volatility in February 2018.

Throughout the least volatile year in recent memory, banks around the world invested heavily in their FX businesses. Most were working to keep up with Citi and J.P. Morgan, which, among top-tier accounts, have established themselves firmly atop the list of 2018 Greenwich Share Leaders in Global FX.

These two banks have leveraged extensive global networks and best-in-class technology platforms to build a lead over the rest of the market that is wide and still growing. Major competitors have also made significant investments, including UBS and Deutsche Bank, which tie for third place, and Goldman Sachs, HSBC and Bank of America Merrill Lynch, which tie for fifth. 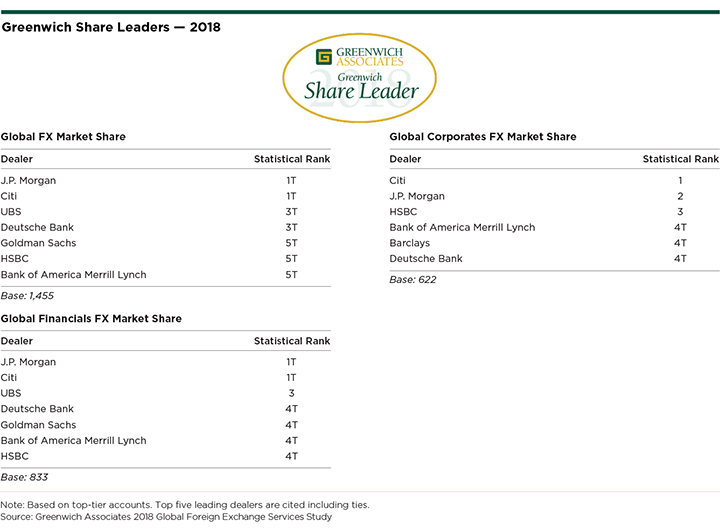 Citi and J.P. Morgan claim the title of 2018 Greenwich Quality Leaders in Global FX Service Quality. The same two banks are also atop the market in Global FX Trading, while Bank of America Merrill Lynch is the 2018 Quality Leader in Global FX Sales. “2017 was a year that saw several banks make strategic investments in FX, particularly in e-trading, to prepare for the expected rebound in the business,” says Greenwich Associates Managing Director James Borger. 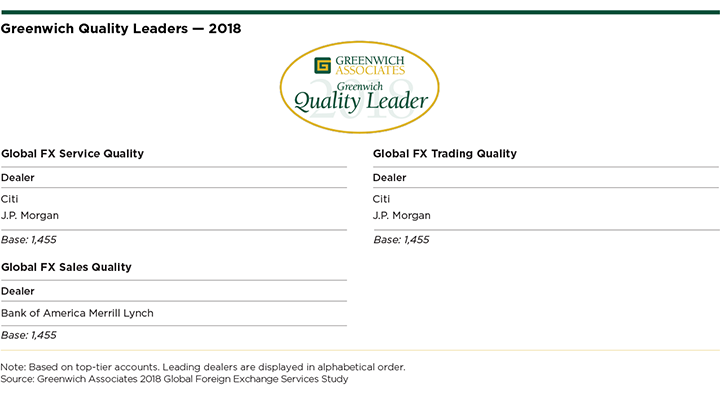 Most strategic investments last year focused on technology. For the past decade, banks have built out e-trading capabilities in order to capture their share of the growing percentage of FX trades being executed electronically. Today, technology has permeated the entire business, making FX one of the most electronic markets. While individual banks might have strengths in either high-touch sales or e-trading, the two channels are becoming increasingly interconnected. It’s getting harder to be especially good in one area without the other, so dealers have had to invest in both. One example: J.P. Morgan, which traditionally excelled in electronic trading, now ranks near the top of the industry in sales coverage quality.

“Some banks have the right people, but not the right technology,” says Greenwich Associates consultant Satnam Sohal. “A strong technology platform helps free up sales traders, who can then spend less time on operational issues and more time with clients.” To put this in context, the 2018 Global FX Services Study shows a notable increase in the value buy-siders place on dealers’ e-trading capabilities as a factor in directing their flows to counterparties.

Building a global FX platform is expensive—and maintaining these platforms is actually becoming more costly due to the need to continually roll out new technologies. In addition to competing for business on third-party e-trading platforms and delivering proprietary services on their own single-dealer platforms, for instance, more banks are now investing in execution algorithms for the buy side.

A 2018 Greenwich Report, The Evolution of FX Algos: From “Nice to Have” to “Need to Have,” projects that while algorithmic trading currently accounts for only limited FX trading volume, it will grow in importance over the next three years—forcing dealers to deliver. “While algo adoption has so far been higher among the largest institutional users of FX, a steady rise in the use of TCA should aid further growth,” says Greenwich Associates consultant Tom Jacques.

Given these new economic realities, most banks are eschewing the goal of universal coverage and market share, and focusing their global FX strategies on the specific clients, products and/or geographic regions they deem most attractive. Citi and J.P. Morgan are tied atop the market among financial clients, while also ranking No. 1 and 2, respectively, among corporates—demonstrating their rare ability to dominate across the entire industry.

Demonstrating similar reach are HSBC, which ranks third among corporates and ties for fourth among financials, and Deutsche Bank, which ties for fourth in both segments. Rounding out the list of 2018 Greenwich Share Leaders are Bank of America Merrill Lynch and Barclays in Corporates and UBS, Goldman Sachs and Bank of America Merrill Lynch with Financials. 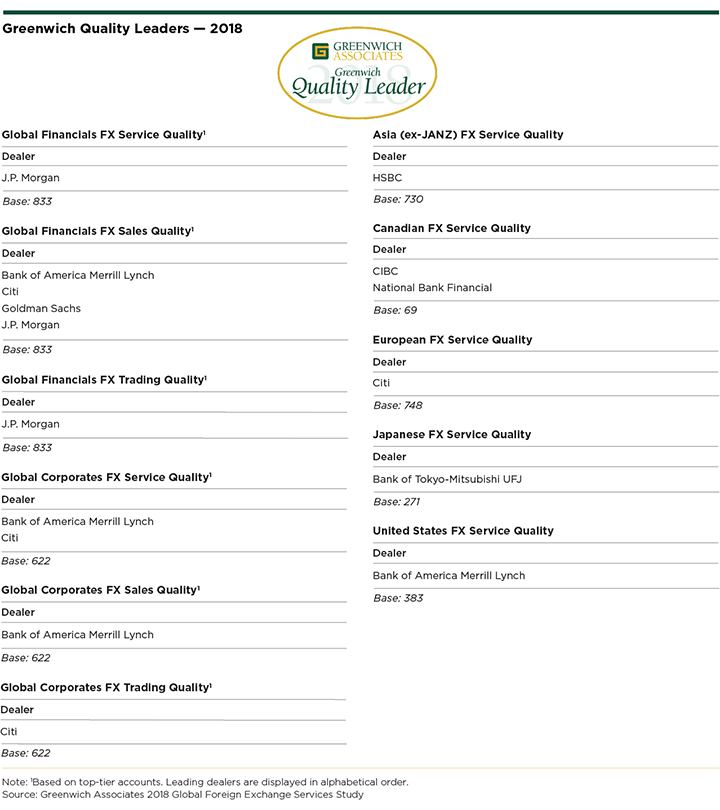 MiFID II is causing ripples in FX. While “best execution” requirements are driving up the value buy-siders place on execution quality, data from the Greenwich Associates annual study also shows that in sales, FX clients place a significant value on the ideas and market color provided by their sell-side coverage. However, as clients move to comply with new MiFID II rules on research, some market participants—primarily in Europe—are imposing strict restrictions on sell-side firms and their own traders. In short, if you don’t have a research contract in place with these firms, you are prohibited from even speaking with them. No calls, no unsolicited emails—nothing.

This development is creating complications for both sides because corporates and financials, accustomed to getting FX research and market information “for free” from their trading partners, are generally unwilling to pay for research—at least for the moment. Only about 5% of participants in our 2018 study say they would be willing to pay a discrete fee for FX research. “Since the onus is on the buy side to ensure they are not receiving any inducements to trade, some clients are taking a very conservative stance,” says Greenwich Associates Managing Director Frank Feenstra. “There will be some disruption this year, but this will subside as the industry comes up with a structure and pricing level that works for both sides.”

Greenwich Associates conducted interviews with 2,355 users of foreign exchange globally, of which 1,455 are top-tier accounts, at large corporations and financial institutions on market trends and their relationships with their dealers.

To be considered top tier, a firm must be either a central bank, a government agency, a hedge fund, a fund manager, a FT100 global firm, a firm with reported trading volume of more than $10 billion, or a firm with reported sales of more than $5 billion. Interviews were conducted in North America, Latin America, Europe, Asia, and Japan between September and December 2017.

Which Banks Stand Out in Volatile FX Markets?
Amid Volatility, Large European Companies Will Likely Look for Help Close to Home
Canadian FX, a Tale of Technology and Talent