Seeking Profits in FX, Many Dealers Narrow Their Focus

Change remains the defining characteristic of global currency markets—at least in terms of the battle among banks for market share in FX trading.

For the second consecutive year, significant market share was redistributed among the dealers in the top ranks of the FX market in 2016, with some leading dealers adding as much as two full percentage points in market share and others ceding similar amounts. Meanwhile, the number of banks within that top rank expanded considerably. In 2016, six banks tied for the top five spots in the Greenwich Associates measure of global market share in FX trading.

In 2017 that list expands to eight. J.P. Morgan claims the top spot, followed by Citi, UBS and Deutsche Bank. Tied for fifth place are Bank of America Merrill Lynch, Barclays, HSBC, and Goldman Sachs. These banks are the 2017 Greenwich Share Leaders℠ in Global Foreign Exchange. 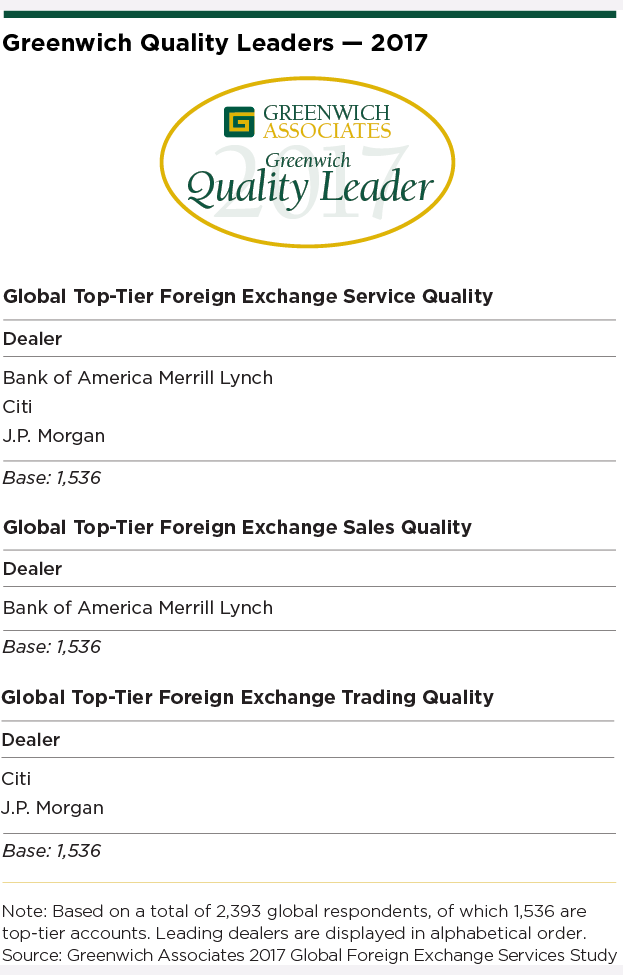 Driving these major shifts in the competitive landscape is a single question: What’s the best way to make money in FX? Although that question is simple, the answer is not. In fact, banks are coming up with radically different answers about how best to generate profits in the space.

For each bank, those answers depend on a range of variables including the bank’s size, footprint, balance sheet strength, overall strategy, and strengths in individual products, regions and customer segments, etc.

Some of the world’s leading FX dealers are narrowing the scope of their coverage and focusing on specific products in which they see the best potential for profits. For example, some banks are shying away from G10 swaps in favor of G10 spot trades. Others are focusing their strategies on particular clients, often targeting their resources toward banks, hedge funds and other financials, or to retail aggregators.

Finally, some banks are becoming much more discerning about the channels in which they compete for business. These banks are not just differentiating between high-touch, higher-margin trades and lower-margin electronic execution. They are also differentiating among different types of electronic venues. (See the following section on single-dealer platforms.)

“In some cases, banks that have ‘lost’ market share at a market-wide level have actually gained share in their areas of focus, which presumably represent the most profitable parts of their business,” says Greenwich Associates Managing Director Woody Canaday.

Not all global banks agree that the best way to maximize profits is to focus on relatively narrow areas of strength. Banks like J.P. Morgan, which climbed into first place in the global market this year, Citi, which held share with financial accounts and earned the top position with corporates, and HSBC, which was not an overall Greenwich Share Leader in 2016 but earns a spot on the list this year, are generally hewing to broad-based global strategies and capturing market share along the way.

However, users of global FX markets should understand that, as a group, banks have become much more judicious in doling out coverage and resources and much more focused on the bottom-line returns that customer relationships generate. “Banks have always segmented by client, but now, in setting strategy, banks are analyzing not just the type of customer you are, but also your behavior,” says Greenwich Associates Managing Director James Borger. “What products do you use, how often do you trade, how much do you trade, and where do you trade?” 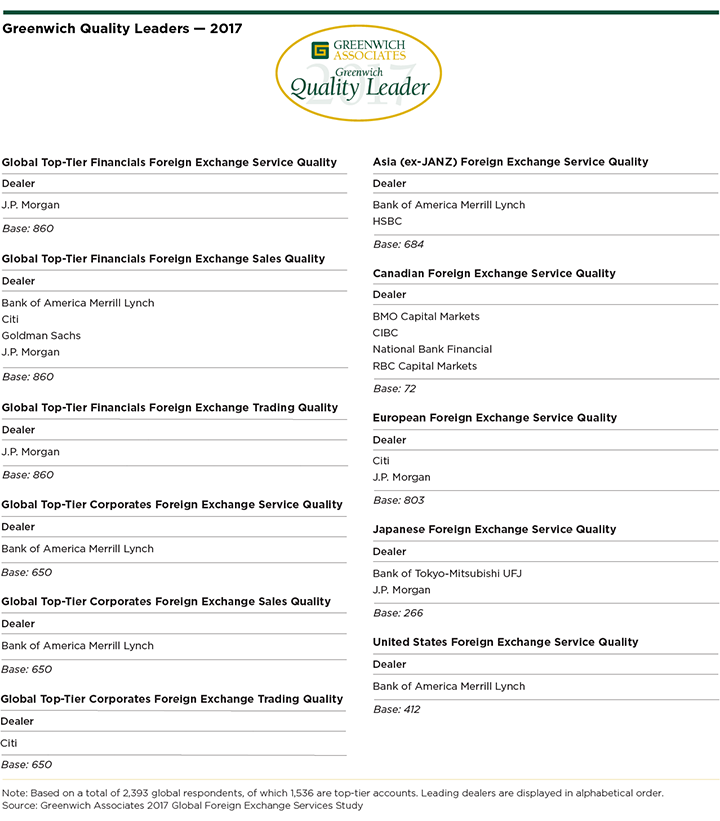 “While some dealers are agnostic about where they find business and are happy to compete for business on price-driven multi-dealer platforms, others are trying to drive business to proprietary single-dealer platforms that are more conducive to longer-term, higher-value relationships,” says Greenwich Associates consultant Satnam Sohal.

Banks view algorithmic trading as another means of building sticky relationships within target segments of the market. Several U.S. and European dealers have been investing heavily to build, improve and roll out algorithms to the buy side in foreign exchange. “Accounts trading via algo execution tools trade at least 20% of their spot volume this way,” notes Greenwich Associates consultant Thomas Jacques.

Greenwich Associates conducted interviews with 2,393 users of foreign exchange globally, of which 1,536 are top-tier accounts, at large corporations and financial institutions on market trends and their relationships with their dealers.

To be considered top tier, a firm must be either a central bank, a government agency, a hedge fund, a fund manager, a FT100 global firm, a firm with reported trading volume of more than $10 billion, or a firm with reported sales of more than $5 billion. Interviews were conducted in North America, Latin America, Europe, Asia, and Japan between September and November 2016.