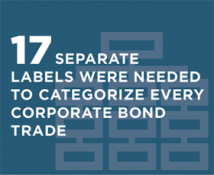 All Electronic Trading is Not Created Equal

It used to be obvious. Bond trades were either executed electronically or they were not. Clients traded via request-for-quote (RFQ) platforms and dealers via interdealer-owned central limit order books (CLOBs).

Everything else was "voice". The biggest debate was whether trades agreed on via IB chat counted as electronic trading (they didn't - and don't). In hindsight, those debates seem quaint.

Innovation in fixed-income trading protocols and technology have helped both U.S. Treasury and corporate bond markets move forward in ways that seemed impossible only 10 years ago. While a 17% headcount reduction on bank fixed-income trading desks over the past five years (according to Coalition data) can’t be ignored, the market’s net gain based on these innovations is ultimately positive.

However, the labeling of trades as either electronic or not in an effort to measure this progress has become a source of great debate. Even bucketing trades by the protocol used is no longer straightforward.

Research findings are based on conversations over the past year with some of the most important participants in the corporate bond ecosystem. Research contributors included CEOs, strategists, traders, investors, and market structure experts from every major trading platform, major bond dealers, nonbank liquidity providers, asset managers, hedge funds, and regulators. Multiple roundtables were held with market participants to hone in on best practices, concerns and an ideal set of reporting standards.