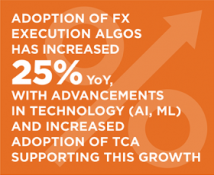 FX Execution: Competing in a World of Algos

Despite the increasingly electronic nature of foreign exchange markets, it is important to note that institutional and corporate FX customers did not shift trading volume away from traditional voice trades to e-trading last year, even with new factors like MiFID II best execution requirements that seem to favor electronic execution. On the contrary, the share of notional FX trading volume executed electronically has hovered around 80% for the past several years.

Greenwich Associates conducted interviews with 2,369 users of foreign exchange globally, of which 1,491 are top-tier accounts at large corporations and financial institutions, on market trends and their relationships with their dealers. To be considered top tier, a firm must be a central bank, a government agency, a hedge fund, a fund manager, an FT100 global firm, a firm with reported trading volume of more than $10 billion, or a firm with reported sales of more than $5 billion. Interviews were conducted in North America, Latin America, Europe, Asia, and Japan between September and December 2018.