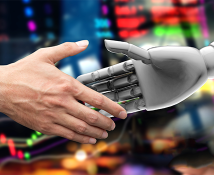 The Future of Trading: The People

Technology innovation over the past two decades has not only changed the way the markets work, but has had a meaningful impact on the careers of financial services professionals. Some, whose only goal in college was to become a trader, have found themselves now as fintech founders. Others who went to engineering and technical schools and hoped to build microchips and airplanes have found themselves taken in by the excitement of Wall Street.

In this Greenwich Report, the final in a three-part series made possible by Refinitiv, we will examine the impact of technology on the people that make the capital markets work. The story is primarily one of opportunity and positive change, with automation helping more than hurting the day-to-day lives of most in the market. But as with most things in life, those willing to adapt to the new reality are ultimately those most fulfilled by their work.

Five years into the future, financial services work will be a true merger of the best of both humans and machines. The majority of people will program in some way—or at least have a basic understanding of how to. Investing and trading decisions will still tilt toward human intuition, but data analysis and trade execution will more often see computer automation take the lead. Even in those markets for which bilateral negotiations are still required, the majority of those conversations will be captured digitally, reducing errors and keeping compliance departments happier than they are today. Ultimately, capital markets are still run for people by people, but accepting the changing nature of that work is key to all who hope to move their career forward.

In April 2019, Greenwich Associates conducted an online study with 107 capital markets professionals globally. The study examined the technology trends, the data explosion and the skills required to be successful in capital markets in the future.