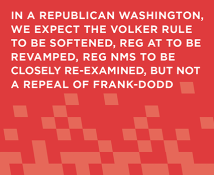 2016 will go down as the Year of the Unexpected, as Brexit, Trump and the Chicago Cubs upended “likely outcomes.” In that same vein, a liquidity crisis failed to emerge in the bond market, and the blockchain buzz still hasn’t died down. And if the path forward for financial markets wasn’t already uncertain, a Republican Washington now threatens to reverse laws and regulations that the industry has spent several years and billions of dollars adapting to.

Nevertheless, the outlook for capital markets participants is looking brighter. Volume-creating events have helped bank revenues improve, and we expect the trend to continue. Interest rates are finally rising, further aiding bank profits and benefiting the market as a whole. Deregulation—or at least no new regulation—is likely to be the theme driving Washington for at least the coming year. And while the full impact of MiFID II still remains unknown, we’re hopeful the market will adapt throughout the implementation phase, leaving the markets more efficient but not over-regulated.

And on that positive note, here are our Top 10 market structure trends to watch for 2017.

Post-crisis Washington has been led until now by Democrats who believe more stringent capital markets regulations are the key to a safer and more efficient system. This perspective helped Dodd-Frank to pass and drove the subsequent agendas of the SEC and CFTC.

The majority view will change dramatically in 2017 via an atypical Republican president and a fully Republican Congress. Proposals that previously served as little more than sound bites must now be taken seriously, as Republicans finally have the votes to pass them. We expect the Volcker Rule to be softened, Reg AT to be revamped if not killed, Reg NMS to be re-examined more closely than ever, and the move toward public reporting of U.S. Treasury trades to be slowed dramatically.

That said, we do not expect a repeal of Dodd-Frank and a full move to the right. Many of the changes brought about by Democratic-backed legislation are good, such as the move to central clearing, and the market would be damaged by a rollback. But in addition to the aforementioned rule softening, do expect a less prescriptive and light-handed approach that should help reinvigorate market activity.

The Friday before the U.S. election, the 10-year U.S. Treasury rate stood at 1.77%. Only two weeks later, the yield on 10-year U.S. Treasuries was up an astonishing 59 basis points and has risen even further since. Increased government spending and lower taxes are expected to finally drive up inflation and along with it, interest rates—a good thing for the capital markets. Concerns over potential trade wars and immigration rules still exist, of course, but we’re hopeful that the checks and balance of Washington will alow only measured change.

While volatility is still mysteriously muted, volumes have picked up, supporting continued bank profits in various trading businesses—similar to the Brexit boost to bank earnings in 3Q 2016. Almost no one expected markets to get a Trump bump, but that seems to be exactly what’s happened.

The ETF market, and with it passive investing, will continue to grow in 2017. Robo advisors alongside the demand for cheap, liquid fixed-income exposure will act as major catalysts to increase ETF trading and assets under management. In addition, ETFs are increasingly being viewed as derivative alternatives. Recent Greenwich Associates research finds that 50% of asset managers plan to replace some derivatives positions with ETFs in the coming year. Commissions on ETF trades, worth over $800 million in the U.S. in 2016, are set to grow further in 2017.

Despite the meteoric rise in popularity, however, passive investing has its limits. While seemingly still years off, so much money will have been pulled from active strategies that the opportunity to find alpha will reach a tipping point, and money will start to pour back in. To put it more simply, you may pass up a penny found on the street, but you’ll likely stop for a $20 bill.

Proprietary trading isn’t only about trading anymore. While ultra-low latency infrastructures and rooms full of genius programmers can continue to make money trading, why should PTFs limit themselves to a single revenue stream?
With ultra-low latency all but commoditized and the most successful PTFs now well established, it only makes sense to further monetize the assets that they’ve developed over the past decade.

Selling technology, providing custom liquidity streams and acting as an outsourced trading desk are the low-hanging fruit. Expect even more creative extensions of the prop trading business to pop up in 2017.

Over one-third of volume traded globally in fixed-income markets is now traded electronically. If we were to recalculate, removing more bespoke products like ABS and MBS, electronic trading would be closer to 50%, rivaling long-time electronic markets like cash equities.

As such, rather than thinking about electronic trading in fixed income as a new thing, it’s time to consider it a core part of the market structure. As we’ve pointed out in the past, expect changes to be evolutionary and not the “big bang” that some have been anticipating. The pace of new platform creation has and will continue to slow dramatically. Those already up and running will refine their offerings, as incumbents continue to grab market share and newer entrants find their niches. With the U.S. bond market now worth about $40 trillion, there is room for (almost) everyone.

Futures had a good 2016. Using CME’s third-quarter earnings as a proxy, futures volumes in 2016 were up roughly 8%, following some stagnation after the credit crisis. We expect this trend to accelerate in 2017.
Putting aside the potential softening of some U.S. regulations, the cost of capital will continue to hit banks and, as a result, their customers. Investors will therefore be forced to look harder at more cost-effective cleared products. Product selection will expand beyond interest rates and energy into credit and FX—a good sign for futures markets.

Stagnant interest rates hovering near zero don’t inspire much trading activity. But with interest rates rising and more uncertain in 2017, the need for market participants to hedge and speculate will increase, further boosting futures volumes. Whether the growth in futures hurts the swaps market or the rising tide of interest rates lifts all boats is still to be seen.

The buy side continues to gain tremendous value working with large global banks that can provide a comprehensive set of services. Case in point: In nearly every market we cover, the top five dealers in any given asset class handle 50% or more of customer trading volume. But with MiFID II unbundling on everyone’s mind and technology making it easier to aggregate trading services into a single screen, the buy side will look more toward a best-of-breed approach when it comes to broker-dealer services in 2017.

Expect more trade execution with nonbank liquidity providers—particularly in flow products. Don’t be surprised if some asset managers look to outsource their trading altogether (see point #4). Investors overall will increasingly seek research from sector specialists, often expanding their counterparty lists to achieve this goal. However, they will simultaneously send an even greater concentration of business through their top three dealers to ensure access to balance sheet and the global reach they need.

In theory, a pilot program is a sensible way to test new ideas before rolling out to a wider market. In the case of the Tick Size Pilot, however, the costs will likely outweigh the benefits. Early indications are that spreads and depth have increased but volume has not—results that many would have predicted even without what has amounted to an expensive, market-wide technology upgrade.

Equity markets would be better served by taking illiquid issues outside of an order-book model and utilizing auctions or even (gasp) request-for-quotes, as other less-liquid markets do. We hope for more such out-of-the-box thinking for U.S. equity markets in 2017.

Financial market firms have few excuses left for not moving toward the cloud for nearly every computing need. It’s more efficient, cheaper and arguably safer than doing things the old-fashioned way. To be fair, there is a real cost to transitioning legacy applications into a cloud environment, and accounting rules don’t encourage this behavior to boot. For the same reason that Wall Street still has mainframes hidden in its basement, cloud adoption is lower than it should be—cost. But long-term gain requires short-term pain, and it’s time for everyone to get on the treadmill.

Blockchain moves from proof of concept to production

Last year everyone said it was overhyped, but it sure doesn’t seem to be. In fact, despite our deep focus on complex market structure issues across equity, fixed-income and FX markets, our blockchain research was the most-read by our capital markets clients in 2016. In 2017, we’ll finally start to see the rubber meet the road, with talk converting to real implementations.

Smart contracts look to be a key tenet in the capital markets distributed ledger technology (DLT) discussion, an area set to grow quickly in 2017. And don’t discount the value of virtual currency either. Regardless of whether Bitcoin reaches $1,000 by the end of the year, the ability to transfer value around the world with no middleman continues to have the biggest appeal.