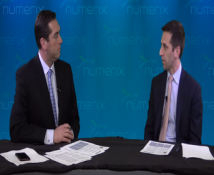 Kevin McPartland, Head of Market Structure & Technology Research at Greenwich Associates and Jim Jockle, CMO of Numerix review the years’ top trends in market structure, regulation, and technology. Kevin reviews his "15 for 2015: Top Trends to Watch" research paper and assesses what he got right, what's been less of a focus and what's going to continue into 2016.

Kevin McPartland (Guest): Thanks for having me.

Jockle: Well, Kevin, not many people do this, put themselves out there in this way, but we have your 2015 top trends to watch for and want to talk a little bit—you know obviously we’re going to start looking ahead to 2016, but what did you get right, and what did you get wrong is going to be the ultimate question.

Now I’m not going to go through all fifteen, and that report is available on greenwichassociates.com, but do want to talk about a couple of these of the 15, what’s not going to be on the list going into 2016.

McPartland: Yeah that’s a great question. So let’s talk about some of the stuff that will continue on. You know, rates and volatility right, still a big part of the conversation. Hopefully, leading into next year, the “when will rates rise” conversation will be over because they will have started to rise. So that’ll be interesting. Regulation in Europe around EMIR and MIFID II, have been big topics in 2015 will continue to be big topics 2016 but in a different way right, we should actually see swaps start to clear -mandating for clearing in Europe in 2016 so that should be pretty interesting.

The other interesting one that I’m sort of undecided on is the futurization of the swaps market we’ve been talking about –that’s since at least 2010 when Dodd-Frank was passed if not longer. There’s certainly been some progress there. There’s been sort of an uptick in volume for a couple of the major products CME of course, Eris, GMEX some of the newer ones, but they’re still does not seem to be any wholesale changes in buy-side behavior so we’ll have to keep an on eye on that but for the time being it seems to be a slow and steady pattern.

Jockle: So one of the things I will look at is your second one which was US banks getting a real taste of Basel III. Obviously some of the capital charges have been phased in, and we’re going to continuations of that but I think most notably over the past few weeks has been the quantitative impact report on FRTB. And so you know kind of taking a look ahead as it relates to you know the introduction of  capital in the trading book alongside the rising cost of capital on the banking side, you know, how are banks going to  start looking at their businesses -is it time that we’re going to  see an exit our of some asset classes?

McPartland: Yeah we’ve seen a lot of that this year, we’ve seen a lot of it recently right we’ve seen a number of firms back out of the swaps clearing business we’ve seen a number of firms over the last two to three months measurably back off their fixed-income businesses because of the cost of capital and a sort of a limited profitability they’re saying and some of those business it seems to continue. There’s still a lot more to come and I think one interesting data point is if we look at if we look at Europe, US banks working with European clients are really sort of capturing a lot more of the market than are the European banks even as US banks are hit by tougher capital charges the European banks are already facing a lot of those charges so already have a tougher regime to follow which is allowing the US  banks to really pick up a tremendous amount of share on the home turf of the European banks.

Jockle: But now is regulation  potentially under fire? Because over the past couple weeks we have seen the Bank of England coming out looking to say let’s reduce some of these capital charges for the English banks so they can be more competitive. So, what kind of signal you know could we see in terms of little bit of a fist fight if you will go into 2016?

McPartland: Well that’s a great part about the liquidity debate is now we have more and more of the big regulatory bodies around the world and Central Banks stepping up and saying “liquidity problem, liquidity problem” what are we going do -well to a large extent they caused the liquidity problem they told banks we don’t want you taking these risks, we don’t want you committing this capital and now they’re dealing with the consequences so you know exactly where that tug of war ends and know if they back off you talk about corporate bonds gets a lot of attention there so you want liquidity in the corporate bond market make it more affordable for banks to hold corporate bond inventory so they can provide the liquidity in the market place again it’s really in the hands of the regulators to make those changes.

Jockle: So you know this week you know you have the new Brad Pitt movie coming out based on Michael Lewis book looking back at the credit crisis he’s out there saying we need more regulation but yet perhaps we’re at a point of saying less.

McPartland: We don’t need more regulation. We certainly needed a lot of what we got out of Dodd Frank. I think the fact that we have a lot more data to work with we have more transparency in to who’s doing what, I think central clearing of a lot of these products is in the end a good thing despite the complexities of getting to this point but I mean we certainly went to far we got too prescriptive so you know despite Michael Lewis and Elizabeth Warren yeah it’s not about more, maybe more fine-tuned regulations and laws that from what we currently have but certainly not more.

Jockle: Ok so let’s go to the other side of your coin, on the technology side one of the things you indicated for the 15 of ‘15 was cloud computing moving closer to business as usual are we getting there?

McPartland: You know, it’s sort of incremental. I think we are I think it’s getting a little bit closer both on the buy and sell side - people feel more comfortable I think -you’re often having CTO’s realizing they are using things that are running things in the cloud and they didn’t completely make that connection before. I think a couple years ago they thought of the cloud as servers off somewhere where I don’t know where they are and can I trust my data there. Whereas  the reality  is a lot of service as a service and hosted trading technology in some cases that are used and had been used for a couple of years on the sell side in particular, that is how it’s running so I think that just a better understanding is coming to some of those technology professionals you know which has come from education which then allows them to think a little bit more broadly and think about how they can expand that. And then there’s the you know there’s the cost cutting side they have to figure out how to do things cheaper and more efficiently and clearly using more cloud delivered solutions is a much more efficient way to get the compute power that they need.

Jockle: So clearly I mean looking at the overall revenue profiles of Amazon for AWS and Microsoft people are buying the cloud and consuming it.

McPartland: Yeah absolutely and then you know and we’ve talked about this in the past but it used to be that fifteen years ago that the technology on Wall Street was sort of far surpassed what you would have at home and now I feel like it’s really gotten to be the other way with your personal technology is often better than what you have at work. That needs to reverse right, we are talking about you know big money moving around and real institutional workflows that should benefit from all of the technology that in the end was developed for the consumer.

Jockle: So let’s look ahead to 2016 if I had to take a guess in terms of technology reform one my guess would either be either A. Blockchain, or B. prevention on cyber-attacks.

McPartland: Yeah absolutely. So block chain and there’s no question I think one of the things that will see from block chain in 2016 is that the conversations get a little bit more real. I think 2015 was a year of people learning what even it is and how does it work and when we get to 2016 I think it’ll get more realistic in terms of what it can actually can do,  less pie in the sky and more where the rubber meets the road with the engineers tell us what the limitations are so we can ultimately find the benefits. I think that’s a big part of it and the other thing I think from a tech perspective we mentioned this last year is talking about instant messaging but I think instant messaging is now the wrong way to call it and we’ve learned that it’s more about online collaboration and connectivity and integration so I think we’re going to see a lot more of that conversation next year as well.

Jockle: Any point in time you have Symphony gracing the internal pages of the New York Post you know obviously there’s a more visible movement around collaboration especially within the banking industry.

McPartland:  Yeah right I mean when it gets to the mainstream media then you know obviously the conversations hit an inflection point.

Jockle: We’ll just do me one favor stay off of a page 6. Kevin, I want to thank you so much and when is your report coming out?

McPartland: Two days after the new year so look for it as soon as you get back to work after the vacation