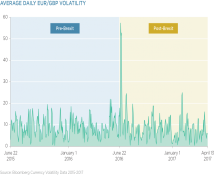 Any lingering uncertainty about Brexit actually moving forward has been swept away by Theresa May’s letter of March 29, 2017. So it’s time for companies to start preparing—although for what is unclear.

In this period of uncertainty, we believe that companies should focus on “no regrets” moves—actions that take several years to prepare, have manageable costs and help corporates avoid significant disruptions if the implementation period ends up creating significant obstacles to their current conduct of business.

Two areas that treasury and finance departments should focus on quickly:

Given the U.K.’s tight integration with the EU-27 and its floating exchange rate, changes in the GBP’s exchange rate have typically been gradual, allowing companies to adapt. Post-Brexit, the volatility of the GBP has gone up significantly, and the snap election just announced for June 8, 2017 is another example of another unanticipated event which will drive volatility.

We believe this volatility will last for the next few years. Large FX movements within a short time span can significantly impact margins when a company’s costs and revenues are denominated in different currencies—such as car manufacturers building cars in Germany and exporting them to the U.K. Companies must have a thorough understanding of residual currency exposure that result from such operational mismatches.

In the short term, companies may turn to their banks for financial hedging solutions to help manage this exposure. But in the long term, only operational hedges will provide a sustainable solution—which means moving costs or revenues from one currency to another.

2. Review your banking relationships and costs

For companies with financial services needs in both the U.K. and the EU-27, costs will almost certainly increase as banks, among other things, have to replicate infrastructure and comply with additional regulations.

This will affect corporates in two ways: Costs will go up as banks pass on the increased expense from servicing corporates in both the U.K. and EU-27, and some banks will “retrench” to either the U.K. or the EU-27. The latter avoids some of the costs from replicating infrastructure and additional regulation, but also results in loss of scale, which will ultimately drive costs higher.

In addition to increased costs, treasurers will need to determine which banks are likely to want to service their business in the U.K. and which ones in the EU-27. Banks can change their business focus quickly, and anticipating which banks will be a stable partner will avoid the hassle of precipitously unwinding banking relationships at a later point in time.

Two Areas to Keep on Your Radar

Although the future is unclear, treasury and finance departments should pay close attention to the following:

Single European Payment Area (SEPA) has greatly improved treasury operations by providing standardized and harmonized regulation of payments. Several non-EU countries, such as Switzerland, also use the SEPA standard, but this is crucially tied to having a regulatory regime equivalent to that of the EU. As current discussions are more tilted toward a hard Brexit, equivalence of regulatory regimes should not be taken for granted. Companies may want to have contingency plans in place in the event of any disruptions to the U.K.’s participation in SEPA.

Furthermore, it will be important to see whether the U.K. participates in the future evolution of SEPA—in particular, the anticipated pan-European real-time payments system. When this system comes into place (currently scheduled for November 2017), allowing SEPA users across Europe to send and receive payments instantaneously, U.K. businesses could be at a competitive disadvantage if the U.K. did not follow this development.

At the same time, the EU is forcing some non-EU countries, such as Switzerland, to start applying VAT to financial services provided to EU-based clients, which may also happen as part of the Brexit negotiations. Therefore, this remains an area where companies should closely watch the ongoing political discussions.

Treasury departments with significant business in both the EU and the U.K. should review the potential currency risk to protect from further volatility, and focus on stronger operational hedges as well.

In parallel, it is important to keep in close dialogue with your banks to understand which ones have a credible commitment to serving you in the U.K., in the EU and in both markets. Consider reducing dependency on banks that cannot articulate clear long-term commitments.

Furthermore, review your operations that rely on SEPA or which may be significantly impacted by changes in VAT law in order to be able to react quickly once the lay of the land in these areas becomes clear.