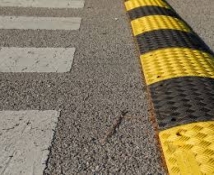 A Case for Asymmetric Speed Bumps in U.S. Equities

A key driver of success in trading the modern U.S. equities markets is speed.

When all market participants have access to the same information, the winners are those who can analyze and interpret this information effectively, but also those who can implement their ideas before the market re-prices and the alpha is lost.

Every day profits are made by the fastest traders who react quickly to new information, whether it’s an earnings release, economic data, geopolitical news, or a price movement in a related instrument trading in a geographically dispersed data center.

For some latency arbitrage trading firms, speed is so important that they will invest significant sums in technology such as dedicated microwave links, laser technology or in some cases shortwave radio, in order to achieve speed advantages of mere thousandths to millionths of a second.

One common strategy, for example, is a proprietary trading firm reacting to a tick in the futures market in Chicago and racing data across the country to pick off the now stale liquidity provider quotes in related instruments trading on exchanges with data centers are in New Jersey.

There is a strong argument that this type of trading activity places a material tax on the industry, in the form of wider spreads and, therefore, worse execution prices as liquidity providers seek to avoid being adversely selected by firms deploying these latency arbitrage strategies.

Over the past two years, exchanges have innovated in ways designed to ameliorate the effects of some of these strategies.  Most notably, IEX, which launched its stock exchange two years ago, employs a symmetrical speed bump that delays both incoming liquidity providing orders and incoming liquidity removing orders by 350 microseconds to reduce the importance of speed in the trading equation.

Although the speed bump was controversial at the time its exchange application was filed, it had garnered strong support among the institutional investing community. In our 2017 Market Structure & Trading Technology study, we found that 85% of buy-side traders were supportive of the IEX speed bump or other exchange speed bumps. 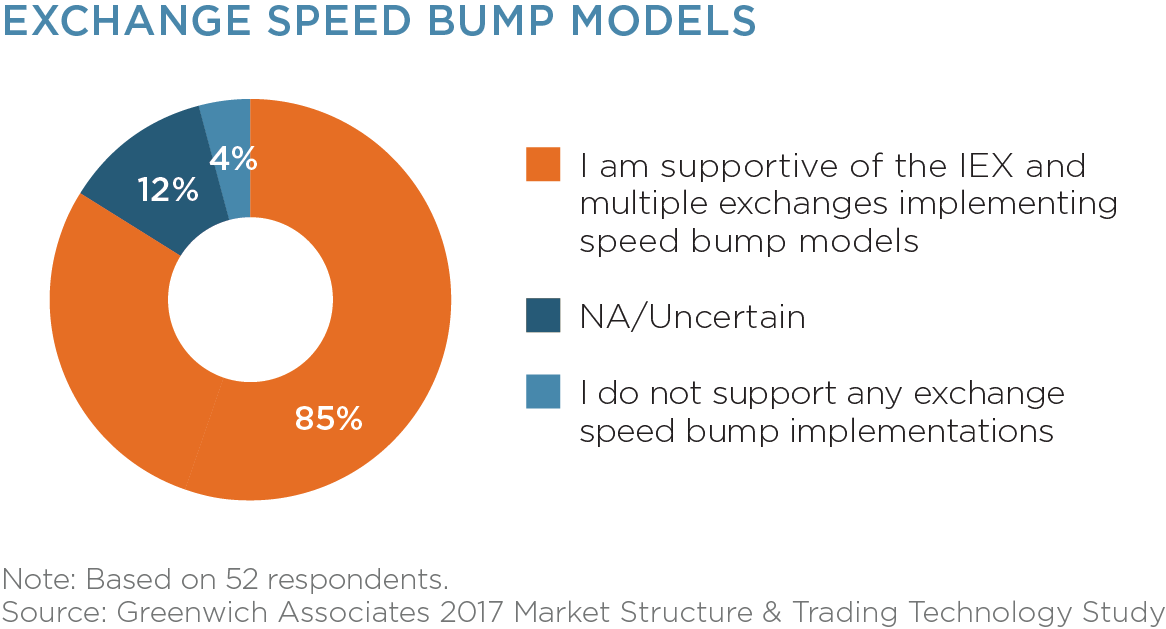 In February of this year, Edwin Hu, an SEC economist, published a quantitative study of executions on the IEX exchange[1]. The study found that market quality, as measured by quoted, effective and realized spreads, actually improved when symbols began trading on IEX.

While the speed bump pioneered by IEX is ostensibly symmetrical (meaning all orders are subject to the same time delay), some have argued that in reality this is not the case.

This is because non-displayed orders that make up the bulk of IEX’s executed liquidity[2] are automatically repriced (using the DPEG crumbling quote algorithm) without having to pass through the speed bump. This means these orders are able to get out of the way of incoming liquidity taking orders, which is a form of an asymmetrical speed bump.

IEX has further recognized the benefits of asymmetric measures to protect liquidity providers from latency arbitrage by introducing higher fees on liquidity takers who remove liquidity from IEX during those moments when the order book is flipping (based on its DPEG crumbling quote algorithm referenced above).[3]

In fact, if the goal is to combat the advantage of high speed latency arbitrage traders then an asymmetrical speed bump, one that slightly delays liquidity removing orders makes a lot of sense. In this way liquidity providers who are contributing to price and quantity discovery are not picked off by faster traders taking advantage of latency differentials.

The Chicago Stock Exchange had proposed exactly this in 2017 – a speed bump that would only apply to liquidity removing orders. Ultimately the SEC did not approve the proposal largely, we believe, because the quotes would have had protected status under Reg NMS while discriminating against one subset of traders.

A report published in January 2018[4] by the Investment Industry Regulatory Organization of Canada (IIROC, the Canadian markets regulator) looked at the effect of TSX Alpha Exchange’s asymmetric speed bump on overall market quality in Canada.

It is important to note that TSX Alpha is an inverted exchange that also introduced minimum order sizes, so it was not possible to analyze the effect of the asymmetric speed bump in isolation. Overall, however, the study found that there was no negative impact on market-wide costs.

The combination of features on TSX Alpha resulted in larger execution sizes and higher fill rates, which can generally be considered  beneficial to market structure. Although there was a marginal increase in transaction costs for orders on TSX Alpha, this was considered an acceptable trade-off for better execution.

When Nasdaq wanted to address the problem of latency arbitrage it took a different approach. In September 2017 Nasdaq introduced its Midpoint Extended Life Order (M-ELO). It’s called ‘extended life’ because orders are held for a half second before becoming eligible to execute. (Note that a halfa second is 500 milliseconds, or about 1,400x as long as the IEX speed bump.)

In effect, M-ELO functions as an asymmetric speed bump, because M-ELO orders can only interact with other M-ELO orders, allowing the user to avoid trading against latency arbitrage algorithms. As these are hidden orders, they do not seek to qualify for protected quote status under Reg NMS. A recent study by Clearpool Group[5] found that M-ELO order types achieved higher quality midpoint executions with lower price reversion than similar order types.

After many years of being disadvantaged by high-speed, liquidity-taking algos, liquidity providers and institutional traders now have new tools at their disposal to protect their orders from latency arb scalpers. Speed bumps and time delays help level the playing field and negate the advantages of expensive microwave routing technology employed by some proprietary trading firms.

Additionally, asymmetric speed bump markets can lower the entry cost to liquidity providers who may have valuable risk absorption capacity but who either cannot or will not spend the millions of dollars necessary to gain a few milliseconds or microseconds of speed advantage.

Experience in the U.S. and Canada has shown that these market models can be beneficial and do not negatively impact overall market quality. Nasdaq’s M-ELO order type reflects an innovative approach to combat the problem; however, M-ELO orders are non-displayed so traders have no way of knowing if liquidity is available when they route M-ELO orders to Nasdaq.

What’s missing from U.S. market structure, however, is an asymmetric speed-bump combined with a displayed quote.  In our view, that displayed order would not need to be a protected quote, which should reduce objections of liquidity removers because they could be free to ignore that quote.

Displayed orders on such a market should remain accessible to all but would likely be unappealing to the firms engaged in latency arbitrage; creating a market microcosm where the high costs invested in dedicated microwave links and other ultrafast routing technology will not be borne by investors, resulting in improved market quality for all.

ISDA Virtual Conference: COVID-19 and the Impact on Derivatives