Cryptomania: How the Changing IPO Market May Have Fueled ICOs

Last month retail investors jumped at the opportunity to own a piece of the hottest new tech stock, sending shares of Dropbox 35% higher from its IPO price. This kind of one-day price move is rarely seen in the stock market these days but has been fairly commonplace in the wild west of cryptocurrency markets. These two markets may seem unrelated, but in fact, there may be more of a link between IPOs and ICOs than you think.

It can hardly escape anyone’s attention that 2017 was a bonanza year for cryptocurrencies, with the overall market capitalization of the asset class soaring over 4000%. It has certainly caught the attention of regulators, with the SEC stating that they will be “devoting a significant portion of its resources to the ICO market.”

Regulators are rightly concerned for a number of reasons: that many ICOs are in fact unregistered securities; that they are not being traded on regulated exchanges or ATS; and that the issuers may have committed fraud or other manipulative practices.

Crypto enthusiasts should welcome this oversight from regulators as a well-defined regulatory construct ensuring investor protections and compliance with financial regulations is important to allow the industry to grow.

Notwithstanding the fact that many of these ICO issuers may have been breaking the law, it is still remarkable that everyday investors were prepared to pour billions of dollars into projects on the back of little more than a ‘white paper’ (a combination of VC pitch deck + business plan + technical scope document – usually around 10 to 15 pages). Certainly, a large part of the allure is the revolutionary nature of the technology. Blockchains, both permissioned and public, enable decentralized transfer of value and are often referred to as the biggest thing since the internet, with the potential to transform old business models and create entirely new ones.

Understandably people want to be a part of that.

But we must also consider the fact that the changing nature of the IPO market has made public equity markets less democratic and less lucrative for the average investor.

In recent years, increased regulatory overhead for public companies (such as Sarbanes Oxley) and a greater availability of private funding has led more companies to stay private longer. As the average investor is unable to invest in stocks until they are listed in public markets, they are missing out on much of the upside from emerging growth companies. 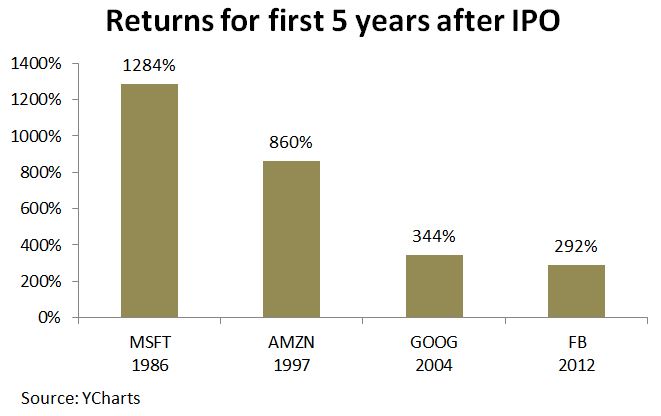 When they go public today, companies are much bigger as measured by metrics such as revenue and valuation.  In 1997 Amazon did its IPO at a valuation of $438mm and raised $48mm. Even after accounting for inflation, this is about the size of the average Series C fund raise[1] today.

Compare that with Dropbox which IPO’d last week at a valuation of over $10bn by the end of the day. And to take an extreme example, look at Uber: in their latest Series G funding round they raised $3.5bn, valuing the company at $59bn. The average Mom and Pop investor, whose usage of the ride-hailing service has driven the success of the company, have had no opportunity to participate in this enormous wealth creation. And it is not just private equity firms who are driving this, traditional asset managers such as Fidelity, Janus, Blackrock, T. Rowe Price, and Wellington are also increasingly participating in late-stage funding rounds.

Blockchain is a technology that allows for the decentralization of business processes. It is perhaps not surprising then that this technology is being used to disrupt a heavily centralized capital formation process. With regulators now forcefully ensuring compliance, the era of scam ICOs is coming to an end. But blockchain technology can still disrupt capital formation, as ICOs evolve into security tokens. I will be addressing this topic in more detail in future Greenwich Associates research.