Security Tokens are Coming as Roadblocks are Disappearing

In the world of security tokens, regulatory clarity is gaining more steam and, as a result, we expect that security tokens will gain even more acceptance in the market in 2021.

The lines between digital securities, security tokens and cryptocurrencies have always been a bit blurry, but tokens and cryptocurrencies like Bitcoin are not the same thing. Asset tokenization allows for the digitization of traditionally illiquid assets, such as real estate, venture capital or other real assets. Tokenizing allows markets to harness the benefits of blockchains—such as an immutable ledger of ownership and transaction history—for traditional assets.

Smart contracts bring additional benefits. They allow for programmatic regulatory compliance through the integration of regulatory protocols. By using certain standards to issue securities-backed tokens, issuers can ensure SEC-compliant features, such as transfer restrictions, lock-ups and holding periods. Also, peer-to-peer settlement can occur on the blockchain, which makes keeping track of ownership simple. Startup funding and private placements have thus far been viewed as some of the best applications for security tokens, given their restrictions.

Getting Past the Roadblocks to Acceptance

In 2019, Greenwich Associates observed the significant advantages of security tokens to be an immutable ledger of ownership and transaction history and the potential for smart contracts to allow for programmatic regulatory compliance. Thirdly, the potential to unlock a liquidity premium was an important feature. 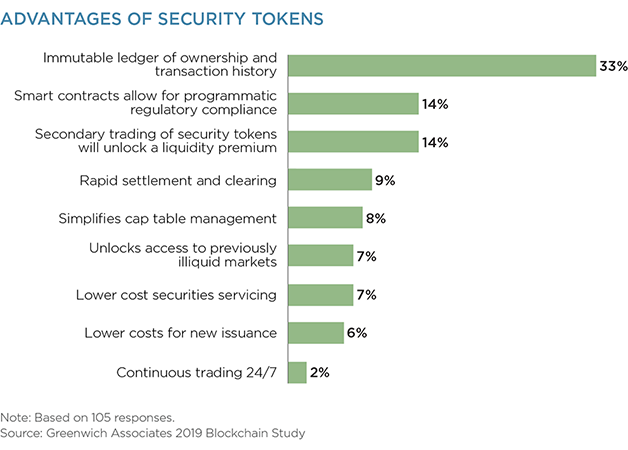 Through our research, we also found that by far the biggest challenge to security tokens was a lack of regulatory clarity, noted by 63% of the 107 participants in our 2019 study. However, this challenge is being addressed (albeit gradually) in the U.S. by the regulators who have allowed for the realization of some recent and significant milestones.

Today, through tokenization and smart contracts, we see a link finally beginning to emerge between regulated instruments and public blockchains, such as Ethereum (which has become the preferred settlement layer for several security tokens). Two notable developments in security tokens provide an example of this progress—ArCoin and INX. Although 2021 is likely to be full of surprises, we believe the registrations of ArCoin (N-2 filing as an SEC-registered fund) and INX (F-1) are meaningful steps in the world of security tokens and evidence that the starter’s pistol has been fired in the race of security tokens in 2021.

Tokensoft, by working several years with the Securities and Exchange Commision, helped Arca Labs launch an SEC-registered mutual fund, ArCoin. The Arca U.S. Treasury Fund will be a closed-end fund and has filed an N-2 form with the SEC in order to register under the Investment Company Act of 1940 and to offer shares under the Securities Act of 1933. As such, it will be a public offering. It is the first blockchain native investment fund registered under the Investment Company Act of 1940—a notable feat. The fund’s shares are to be called ArCoins and will be transferrable on the Ethereum blockchain.  Regulatory clarity has been given a significant boost by ArCoin’s registration, which demonstrates a pathway for ’40 Act funds to be launched, tokenized and settled on the Ethereum blockchain.

The issuer Arca Labs needs the infrastructure of third-party services to make this all possible. The developer, Tokensoft, uses Ethereum’s programming standard (ERC-1404) to program compliance-related transfer restrictions into computer programs (smart contracts) written to the blockchain. In other words, Ethereum allows compliance as code, rather than a process done by a combination of manual intervention and automation. Tokensoft will be the transfer agent of the fund, UMB Bank will serve as the fund’s custodian, and Gemini Fund Services will be the fund administrator.

If successfully launched, INX, a digital asset exchange, will be the first SEC-registered token IPO. While it’s not the traditional S-1 filing (this is an F-1 or a foreign IPO offering), it would be the first digital security token in the U.S. to have reached effectiveness from the SEC. Tokensoft will be the offering platform and transfer agent.

Not only Tokensoft is moving security tokens forward by supporting the issuance and transfer of these tokens. Polymath, Prometheum, Securitize, Texture Capital, and Vertalo are also looking to capitalize on this space. Some are focusing on digital private securities and others are focused on tokenizing real assets (e.g., real estate).

A full ecosystem is emerging across the value chain, including issuer support, transfer agents, broker dealer services, and custody to support these assets. But so far, there has been a lack of secondary liquidity. Greenwich Associates research in 2019 found that the leading obstacle to investment in private securities by equity portfolio managers was a lack of liquidity in the secondary market.

There have been attempts to support greater liquidity. Openfinance, an SEC-designated alternative trading system (ATS), launched a few years ago in Chicago to provide secondary liquidity to security tokens and other digital assets. Investors could trade tokens of venture capital firms (VCs) and other companies. INX (the exchange) recently announced it has acquired Openfinance and thus will support both primary and secondary markets of security tokens. Securitize, already an SEC-registered transfer agent, also just acquired an ATS, seeking to become further vertically integrated.

In addition to INX, other firms are taking steps to build ATSs. A number of firms plan to come into the space in the coming months. Symbridge, based in the U.S., will be a digital asset exchange targeting institutional traders. Prometheum is launching an ATS (alongside other services), as is Texture Capital.

For security tokens, the infrastructure and regulatory policies still need to advance further than they are today to achieve widespread acceptance. The acceleration of ATSs and exchanges outside the U.S. will help. SDX is a well-known entrant, and the FCA in the U.K has given a license to Archax to be the first FCA-regulated digital securities exchanges. 2021 appears to be a year where traditional securities and public blockchains will converge further.

David is a senior analyst and heads up fintech research on the Market Structure and Technology team and has over 20 years of experience in the capital markets sector. Prior to joining Greenwich Associates, he led Celent’s (a division of Oliver... view more