Swaps Clearing Is A Bad Business, Unless It Isn't

You can't really blame Deutsche Bank for getting out of the swaps clearing business .  It has been 7 years since Dodd-Frank was passed, and four years since clearing mandates took effect in the US, and clearing swaps for customers still falls short of the great business opportunity most FCMs had hoped for when Dodd-Frank first became law.

But don't blame the FCMs.  While Dodd-Frank encouraged and required market participants to clear swaps, capital rules such as Basel III seem to do the opposite.  The cost of the capital needed to be in the business remains so high, that only those firms with the most scale, most efficient operations, and best technology can make clearing client swap trades worthwhile.

Further, those same FCMs must only focus on the most profitable clients.  And a profitable client, in this case, doesn’t mean a big client.  A client with a multi-billion dollar, long duration position that only trades twice a year isn't a good client compared to a hedge fund that maintains a fifty million dollar position with a short duration that trades several times a day, for instance.  Big FCMs working only with the latter is what leaves some swap investors either out in the cold or paying 300% more than other clients to clear the same trade . 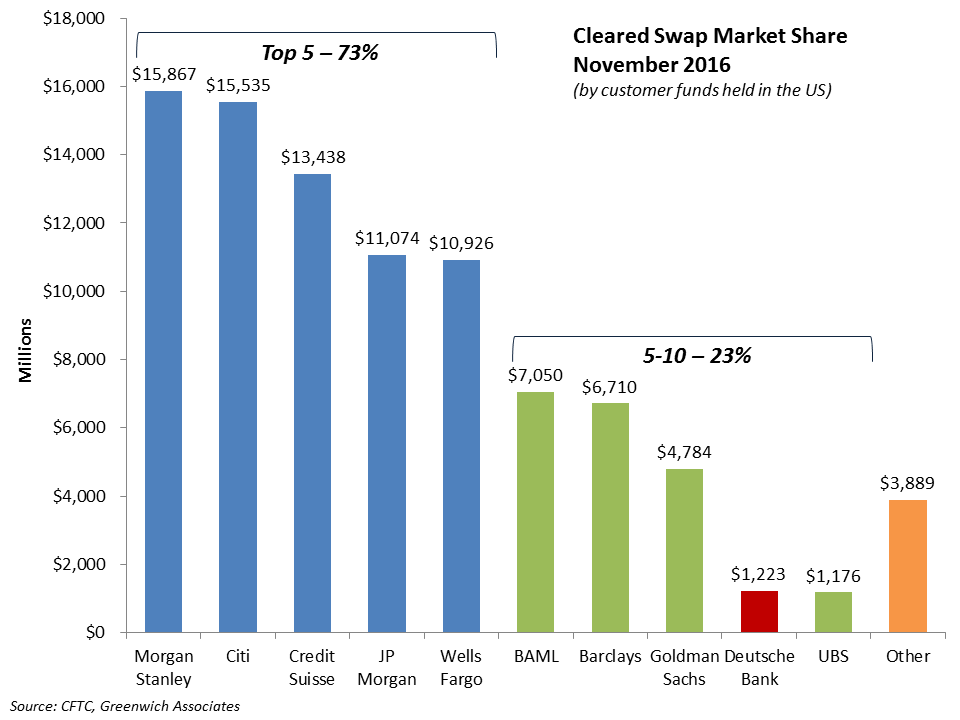 Nevertheless, a few big banks have in fact put all the pieces together in such a way that they can dominate the space.  According to CFTC data, the top 5 swaps clearing FCMs hold collectively 73% of US client funds, a market share concentration even greater than that for swaps dealing, which per Greenwich Associates research sees 63% of buy-side trading going through the top 5 .  In both cases, these businesses – trading and clearing swaps with customers – are quite sticky, with customers making limited changes to their counterparty lists on a year over year basis.

The new leadership in Washington is working hard to tone-down Dodd-Frank.  However, swaps clearing mandates are not in the crosshairs which means they, along with a small few swaps clearing FCMs, are here to stay.