Banks around the world are upgrading—or at the very least, maintaining—their fixed-income platforms to take full advantage when volatility returns and client trading activity and revenues grow as a result.

The largest and highest-rated of these platforms belong to Citi and J.P. Morgan. Citi ranks No. 1 for the third consecutive year in terms of global fixed-income market share, with J.P. Morgan placing second. Goldman Sachs holds the No. 3 spot, followed by Barclays in fourth place, and Bank of America Merrill Lynch and Morgan Stanley, which are tied for fifth. These banks are the 2017 Greenwich Share Leaders℠ in Overall Global Fixed Income.

Among this group of leaders, Citi and J.P. Morgan stand apart, not just for their dominant market shares, but also for the quality of service they deliver to fixed-income clients around the world. The two banks rank first and second, respectively, on their global market share in fixed-income credit, with Barclays at No. 3, and in rates products, in which Goldman Sachs ties J.P. Morgan for second place. In electronic trading (footprint), Citi and J.P. Morgan also claim the top two spots, with Barclays statistically tied for second place. 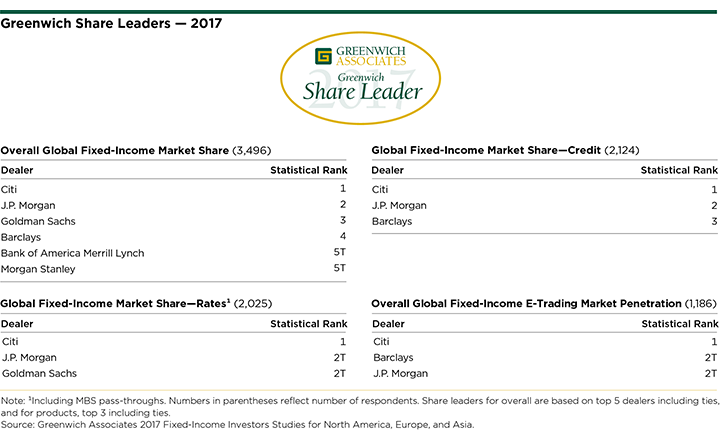 A lull in volatility and the resulting downturn in trading activity have put a dent in fixed-income trading revenues for banks around the world. However, recent action by the U.S. Federal Reserve has banks hoping that a long-awaited turn in the interest-rate cycle has begun, and that a pickup in volatility and trading volume could be on the horizon.

“Banks both large and small are preparing to capitalize on any favorable changes to the business environment,” says Greenwich Associates Managing Director Frank Feenstra.

In Europe, some of the region’s largest banks have recovered from post-crisis stumbles and are committing to the fixed-income business with increased strategic focus and staffing. In both Europe and North America, banks not usually considered bulge-bracket players are investing and looking to expand—not only in their home markets, but also internationally. For example, some of the Canadian banks are expanding outside Canada, Wells Fargo is building out its business in Europe and Asia, and Mizuho and Nomura are targeting the United States and European markets for growth.

While banks prepare for what they hope will be a more active and profitable fixed-income market in 2018, they are also keeping a careful eye on the one issue that could represent a wildcard for the business this year: MiFID II. The new rules governing investor payments for research have just taken effect in Europe. However, since most large investors with exposure to multiple markets will apply new MiFID-compliant practices across the board, the regulations are expected to have an impact on markets around the world.

Of course, MiFID II regulations governing research will primarily affect equity markets, where “unbundling” will dramatically disrupt current practices. But even in fixed income, where research is a much less powerful driver of trading volumes and revenues, the new rules could trigger changes to investor behavior and, ultimately, the research business model of dealers.

MiFID II will also have a meaningful impact on the trading side. Buy-side clients need to demonstrate they are achieving best execution by publishing a summary analysis on their top five execution platforms. Regulators also aim to increase transparency of the fixed-income market through near real-time transaction reporting. Electronic trading will to continue to grow as it eases the burden of new, complex reporting requirements. While the early days of MiFID II may not have caused the disruption that some predicted, it will be important to monitor how increased price transparency will affect the liquidity of the traditionally more opaque fixed-income market.

Americas
Between February and May 2017, Greenwich Associates conducted in-person interviews with 87 institutional fixed-income investors in Canada, 934 in the United States and 154 in Latin America.

Interviewees may be asked about their use of and demand for financial products and services and about investment practices in relevant financial markets. Greenwich Associates compiles the data received, conducts statistical analysis and reviews for presentation purposes in order to produce the final results.