The mood among fixed-income dealers in Asia has turned decidedly upbeat. Trading volumes are on the rise—fueled by strong flows in G3-denominated Asian bonds, new issuances and growth in flows in local currency markets, and a surge in business from China. Investors in the region remain hungry for fixed-income products originating in North America and Europe, and demand for Asian products continues to build around the world. Together, these trends are prompting banks to enter growth mode in Asia, pushing hiring for fixed-income professionals to the most active levels seen in years.

In this increasingly positive environment, Citi retains its role as the top overall bank for Asia (ex-Japan) fixed income. HSBC and Citi are statistically tied at No. 1 in Overall Asian Fixed-Income (excluding Japan and Australia/New Zealand), followed by J.P. Morgan and Bank of America Merrill Lynch, which are statistically tied for third place, and another tie for fifth between BNP Paribas and Standard Chartered Bank.

“The story of 2017 is that banks around the world are again looking to Asian fixed income as an important growth market,” says Greenwich Associates Managing Director James Borger. “This includes not only the U.S. and European names you’d expect, but also those European banks that retrenched in past years and are now eyeing expansion, Japanese banks like Nomura and Mizuho that are fully committed to the region, and relative newcomers like Wells Fargo.”

The top positons of Citi and HSBC reflect those banks’ strength across the Asian fixed-income product set represented in the Greenwich Associates 2017 Share and Quality Leader Awards. In Asian Credit products—the area of strongest growth over the past 12 months—the firms are deadlocked atop the market, followed by a tie between Barclays and Bank of America Merrill Lynch and another tie between Standard Chartered Bank and UBS. In Asian Rates, HSBC edges out Citi for the top spot, followed by J.P. Morgan, and in fourth place, BNP Paribas and Bank of America Merrill Lynch.

“In 2017 Citi has continued to grow market share with its key clients across Asia Pacific and is the No. 1 dealer in fixed income for the second straight year, reflecting the firm’s long-standing commitment to the region. The bank gained market share across all investors, and Citi was ranked first for G3-denominated Asian bonds, G10 investment grade credit and interest-rate derivatives,” says Borger. 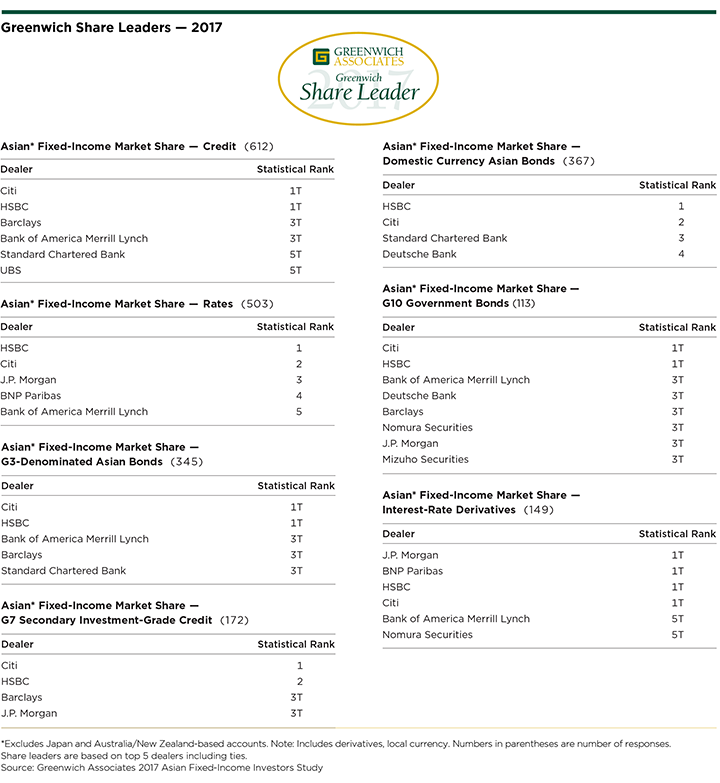 HSBC claims the No. 2 position in G7 Secondary Investment-Grade Credit behind Citi, and ties Citi for the lead in both G10 Government Bonds and G3-Denominated Asian Bonds, where the duo is followed by a three-way tie among Bank of America Merrill Lynch, Barclays and Standard Chartered Bank. HSBC earns the top spot in Domestic Currency Asian Bonds, with Citi in second.

Offshore distribution of Asian bonds is becoming a significant business for global banks, which are finding strong demand for the product from investors in North America and Europe. Citi, HSBC, Barclays, and J.P. Morgan all have found success exporting G3-denominated Asian credit bonds and other products. Several banks, including J.P. Morgan, HSBC and Standard Chartered also stand out for their success in exporting Asian domestic currency government bonds to investors around the world.

“We’re seeing more of a bid for sell-side talent in Asia for sure,” says James Borger. “Much like we saw in the U.S. this year, the amount of bank-to-bank personnel movement is at a level we haven’t seen for several years.”

China’s new Bond Connect platform is gaining traction in opening up at least parts of the Chinese fixed-income market to the world, and this new access is helping to fuel the growth of Asian fixed income overall. This activity is giving a boost to firms like Citi, HSBC, Standard Chartered, BNP Paribas, and others with the established corporate banking relationships needed to participate in new issues that drive subsequent trading volume—but virtually all dealers active in the region are benefiting. “Some are more bullish, and some have more of a wait-and-see outlook, but everyone is paying attention,” says Banerjee.

Although the fragmented nature of the Asian (ex-Japan) fixed-income market has slowed the uptake of electronic trading relative to that of markets in North America, Europe and Japan, the demand from buy-side clients and regulatory compulsions ensure there is steady, albeit gradual, growth in e-trading in some of the region’s biggest financial centers. Across Asia, Citi leads in terms of its penetration of investors for electronic trading, with HSBC in second place. Those two banks are tied for the top spot in market penetration in e-trading of Asian Credit products. In Rates, Citi leads, followed by J.P. Morgan and Deutsche Bank. 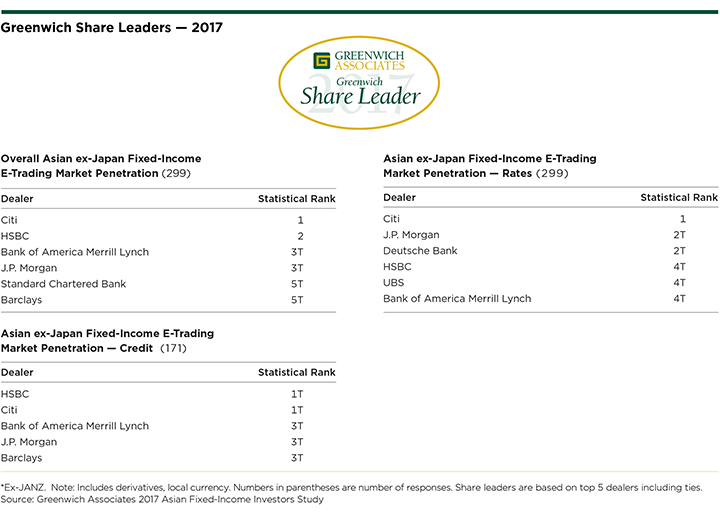