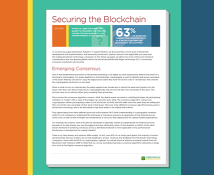 Blockchain, also referred to as distributed ledger technology (DLT), has captured the attention of financial services.

In the most comprehensive study to date, Greenwich Associates assesses the current state of blockchain adoption across banks, brokers, asset managers, exchanges, and technology vendors while also capturing the opinion of the leading blockchain technology companies.

Although companies have only recently begun to experiment with the technology, some important trends are beginning to emerge.

During March and April 2016, Greenwich Associates interviewed 134 global market participants working on blockchain technology to assess the current state of blockchain adoption in capital markets. Respondents included representatives from a broad array of different organization types, 89% of whom were either key decision-makers or actively involved in blockchain initiatives.Out of those respondents who told us their companies were focused on blockchain, 98% identified as decision-makers or actively involved in blockchain initiatives.