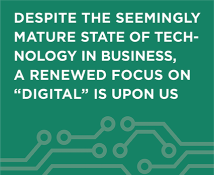 The Year of Digital is Upon Us

2017 was politically strange, economically strong and eerily calm. President Trump attempted to govern the U.S. in ways never before seen and often hard to imagine. Britain seemed to second-guess their choice to leave the EU while carrying on negotiating the exit. Asset prices around the world continued to rise, prompting bubble fears despite generally supportive fundamentals (for those assets with fundamentals, unlike Bitcoin). Even with the first real nuclear threat since the Cold War, markets have remained oddly calm, with volatility and volume remaining depressingly low, particularly for those who make money only when markets move.

Heading into 2018, dreams of volatility will continue, and watching interest rates rise will be like watching grass grow. While both will be key factors on every market participant’s dashboard, neither is really a trend—just business as usual. Regulatory change will enter the spotlight again this year, and the importance of data and analytics will be highlighted along with it. Both will impact trading venues, investors, dealers, and those that support them.

With that, these are our top 10 market structure trends to watch in 2018:

Regulators get things done, Congress does not

Despite high expectations and lots of promises, Congress has yet to deliver much meaningful change. While the President and the congressional majority are of the same party on paper, interpretations of the details have made consensus elusive. The same dynamics make it hard to predict if Congress will enact any meaningful capital markets legislation, especially given the higher priority of health care and immigration reform.

However, many changes proposed by the U.S. Treasury do not require Congress, and with the CFTC and SEC working their way back up to full staff, real change by the end of this year is likely. The usual process of comment periods and Federal Register publishing will still be required, but by the end of 2018, the world of swaps trading will shed some overly prescriptive rules, while equities markets will see some unproductive rules unwound.

You’re probably thinking, “It’s not a soft launch—MiFID II is the law of the land now!” That is technically true, of course. And for better or worse, even though the SEC has provided U.S. firms with “no-action relief” from some European rules, Europe’s regulators don’t have the no-action relief lever that U.S. regulators became so fond of using as they implemented Dodd-Frank. However, MiFID II is so wide-reaching and impactful, it is unreasonable to think European regulators can or will crack down on imperfect compliance as the year gets underway.

That is not to imply the majority of market participants, especially if measured by the appropriate market-share statistics, won’t be ready to go. The potential for a public-relations headache is enough to motivate true best-efforts compliance. But we should expect some short-term hiccups that include some counterparties not interacting with one another because of incomplete processes or legal work, non-European firms opting to interact with other non-European firms, and manual work-arounds involving junior staff where technology isn’t yet built. Unfortunately for compliance operations and technology teams, more late nights are still to come, as they work to transform the current “Let’s make sure we’re compliant” implementations into permanent, enterprise-grade installations.

Over three-quarters of investible assets are still with active managers, equal to $56 trillion. Beating the market is hard, but investors continue to vote with their portfolios, offering active managers the chance to try. However, the $16 trillion in passively managed funds today would have all been with those active managers not too many years ago, and the money seems to be flowing in only one direction.

There is a limit here. If enough money passively tracks a set of indices, then the opportunities for alpha in active management will become too hard to resist and a balance will be struck. However, Greenwich Associates research in 2017 found that most portfolio managers see 40% of assets in passive as the limit, compared to today’s 22%—that is a huge opportunity for growth.

Do you really need Coke? Or is Pepsi palatable too? When a portfolio manager decides they need to make an adjustment to the fund they manage, the trading desk is told exactly what security or contract to buy or sell. In the very few cases that the ask is less specific—such as getting credit exposure to consumer staples—the trader will go to the market they know best; in this case, the corporate bond market. That 20th century process is out of date and often leaves money on the table that should go back to end investors.

A combination of data, analytics and product choice is finally allowing investors to identify the best way to execute their investment ideas, and not just make the easiest or most obvious choice. That credit exposure might be easier gained via single-name credit default swaps (CDS), for instance, or even via a consumer-staples-focused ETF. Interest rate, credit and equity markets all offer liquid alternatives via swaps, futures, options, and ETFs. Knowing which one provides the least basis risk, lowest cost, most liquidity, and highest leverage would ensure true best execution—and the robots have finally arrived to help.

Use of alternative data—social media, Internet of things (IoT), satellite imagery, etc.—is more than just a hot topic. Ninety percent of investors using alternative data today tell Greenwich Associates they’ve see a positive return on their investment. Alternative data is not a single thing, however. Treating all alternative data as a homogeneous information source is like talking about the buy side as a single group—hedge funds, asset managers, insurance companies, and pensions are as different from one another as Twitter data, private company financials and geolocation information. And while the alpha to be captured via alternative data is set to grow, the sheer quantity of data available to drive investment decisions is growing exponentially faster.

The past year has seen alternative data increasingly accessible, and this year it will become even more so. But the real challenge is in the evolving process of helping market participants efficiently mine that alternative data for something useful, and then actually putting those results to work. As such, there is money to be made here not only by investors, but also for data providers, visualization and analytics-focused firms, and those helping to get the data to those who need it.

The big equity exchanges figured this out years ago, and now the fixed-income market is starting to follow suit. After years of debating trading protocols and what should be counted as “true” electronic trading, the debate will shift to who can provide the best data and derived insights that ultimately help both liquidity-makers and takers get their jobs done. Corporate bonds have TRACE and Europe has MiFID II. But even in these and other cases where some data is made public, individual market participants can only find real value when also examining trades that failed, RFQs that were lost and orders that never left the blotter.

Even equity exchanges will need to up their game, as the Consolidated Audit Trail (CAT) reporting requirements finally become a reality and MiFID II makes the market more transparent than ever before. Selling data is great, but helping clients to understand what it really means to them is even better. Inject the growing focus on indices (following several notable acquisitions in 2017) as passive investing grows, and things really start to get interesting.

Wealth management comes out of retirement

Robo-advisors are an opportunity, not a threat. Financial advisors have been using software for years to help them determine the appropriate asset mix for their clients, so why not put those same tools right in the client’s hand? While you’d think financial advisors would see this development as a threat to their livelihood, they have quickly and smartly realized robo is, in fact, an opportunity. The more clients are engaged, the more likely they are to stay. So why not leverage technology to help?

Happy clients lead to happy financial advisors, which lead to happy wealth managers. RIAs, broker-dealers and the big wirehouses are loving the current environment. Morgan Stanley is a prime example, as its overall profits continue to grow on the back of its wealth management business. The move to fee-based accounts couldn’t have come at a better time, with this never-ending bull market generating wealth for investors that, in turn, generate fees for their managers. However, if the market decides to correct, as baby boomers pull out more money than millennials put in, this party might not last forever.

Technology innovation in financial markets is severely limited by security and compliance concerns of the market participants. One would assume that in this age of intraday upgrades and animojis, deploying a new application to a potential end user would be the easy part, with the focus placed on feature development and incenting active engagement of these “try-before-you-buy” users. But as anyone in institutional fintech will tell you, moving from “We’ll try it” on the trading desk to “We’ll buy it” is a nightmare.

A financial markets hack in 2018 is an unfortunate inevitability. Although regulatory compliance and cybersecurity are no joke, they are both issues every market participant deals with and, as such, are ripe for centralizing. While Apple can sometimes act as a benevolent dictator, there is one process for getting apps to iPhone users. 2018 is the year in which Wall Street finally makes progress here, with a continued growth in cloud deployments at the center, encouraging not only innovation, but actual adoption.

DLT is an awesome technological development with real practical applications in capital markets, but the hype went a little far. Similarly, cryptocurrencies and their ability to transfer value and raise money are pretty groundbreaking, but a correction in price is inevitable before we can understand their long-term place in the economy. Nevertheless, cash is so 2016, and I wouldn’t be upset if my kids never really know what a wallet is.

We find out what “digital” really means

One could argue that there isn’t a single aspect of business now that doesn’t involve technology. Even exchanging business cards over coffee generally results in a follow-up email and a LinkedIn examination of meeting attendees. But despite the seemingly mature state of technology in business, a renewed focus on “digital” is upon us. Large consulting companies are starting digital practices, software companies are appointing “chief digital officers,” and pretty much everyone has begun talking about their digital offerings.