For most people, cryptocurrency is synonymous with Bitcoin. Bitcoin was the original and is the largest and most successful. Today however there are almost 1,000 other cryptocurrencies and tokens in circulation, according to CoinMarketCap. For the first time, Bitcoin’s dominance in terms of market cap relative to the overall cryptocurrency market, has dropped below 50%. 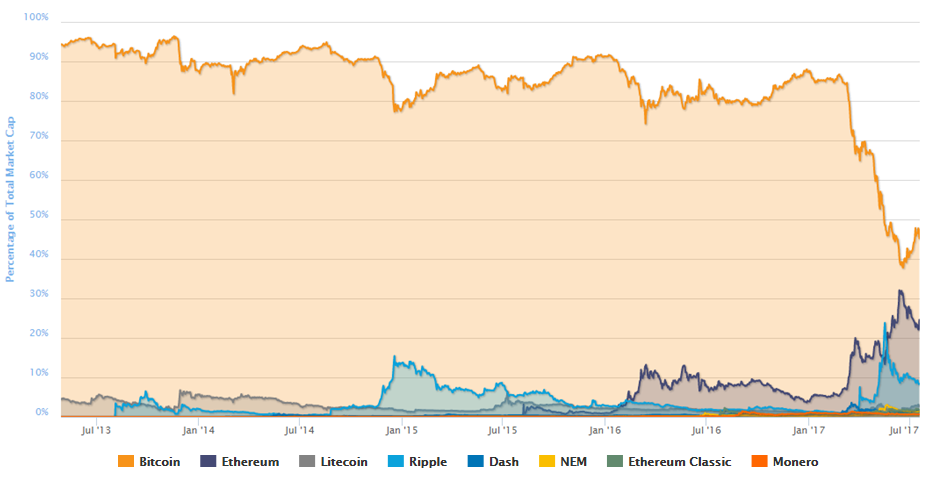 From the outset, there were imitators and copycats. The Bitcoin code is open source so it has been relatively easy for clever software developers to take the code, modify it, release a new coin and then sit back and hope the value of the coin appreciates and makes them rich. Most of the alternative cryptocurrencies – or altcoins as they are known – are exactly that: third-rate knock-offs akin to a pump and dump scheme for their creators.

However, there are many other cryptocurrencies that have a unique, differentiated value proposition and have the potential to support transformative business models. In this blog I will briefly discuss some of these leading altcoins.

Ethereum was first proposed in 2013 by a 19 year-old cryptocurrency enthusiast named Vitalik Buterin. Like Bitcoin, Ethereum was designed to be an open source blockchain with a cryptocurrency token called Ether.  Transactions are verified by a distributed network of computer nodes (miners).  In contrast to Bitcoin, however, Ethereum was designed with integrated smart contract functionality, allowing users to create separate private (permissioned) networks, which are currently being utilized in financial services and other industries.

Ethereum is sometimes called a virtual computer, as anyone can write applications and access the distributed computing power of the network. In return for hosting the decentralized application and providing computing power, storage and transaction validation fees are paid in amounts of Ether. In addition, Ethereum allows for developers to launch their own token that can power applications built on the blockchain. I will be discussing these more in a future blog.

In March 2017 the creation of the Enterprise Ethereum Alliance (EEA) was announced, which now includes 150 members who are collaborating to develop open-source applications and standards that can support their common interests. The creation of the EEA was likely a catalyst to the appreciation of the value of Ether as it signaled broad corporate support for the Ethereum blockchain. However, the EEA is focused on permissioned blockchain applications that do not require the Ether cryptocurrency to operate.

The Decentralized Autonomous Organization (DAO) made headlines when it hacked Ethereum shortly after its launch, dealing a brutal reputational hit to Ethereum and the nascent blockchain/cryptocurrency space. In an attempt to salvage its standing of Ethereum, Buterin and a small group of other core developers decided to roll back the Ethereum blockchain to erase the actions of the DAO hacker. Effectively they forked the code to create a new version of the Ethereum blockchain in which the hack had not taken place.

In my next blog I will discuss XRP and ZCASH.