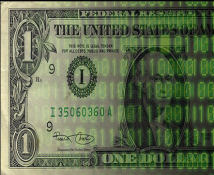 A Digital Currency the Banks Can Get Behind

The financial services sector first started paying attention to bitcoin in 2014, but quickly decided that it was the underlying technology – the blockchain – that interested them most. There are many reasons large banks give to explain why they will not support the bitcoin: It’s used for criminal activities; The network is supported by shadowy entities called miners; We’re not putting our data on a public network that everyone has access to; It has a high risk of being used in money laundering… Jamie Dimon, one of the most outspoken critics has said that “Bitcoin the currency, is going nowhere” but then he went on to say in support of the blockchain, “The technology will be used, and it could be used to transport currency, but it will be dollars, not bitcoins.”

Hold that thought for a second… could the dollar, or any other fiat currency, be digitized in a similar way to bitcoin? In fact that was one of the topics discussed at a Federal Reserve Conference last week entitled “Finance in Flux: The Technological Transformation of the Financial Sector.” The event featured central bankers from 90 different countries and included an address by Janet Yellen in which she encouraged the central bankers to learn about blockchain and other innovative technologies.

The advantages of a ‘digital dollar’ or ‘Fedcoin’ are significant. We already pay for most things electronically anyway using a credit or debit card or increasingly our smartphone. But these mechanisms aren’t actually moving money, rather they are instructing different financial institutions to financial ledgers. This process can take a few days and involves many intermediaries. Paying with Fedcoin would be like taking a dollar bill out of your wallet and giving it to the shopkeeper. Settlement and the transfer of ownership would be instantaneous.

It would also streamline the billions of dollars of money flows that occur each day between banks and the Federal Reserve, and give the central bank greater insight into the liquidity of the banks it regulates – something that was sorely lacking in the run up to the 2008 financial crisis.

But perhaps the biggest bang for the buck (pardon the pun!) could come from the new powers that the central bank would have over monetary policy. For the last several years the Federal Reserve and other central banks have been stimulating the economy via a process of quantitative easing. This is a crude tool that aims to inject money into the economy by buying bonds from banks. The expectation is that the banks will then take that money and make loans to business and consumers who will hire people and buy things. However, as we know, banks have been constrained in other areas and the $3 trillion that the Fed has spent buy back bonds hasn’t necessarily made it to where it is need most.

Now if the Federal Reserve controlled a digital money supply it would have another powerful weapon in its arsenal. Rather than hoping that the new money supply trickles down to where it is needed, they could immediately increase the money supply by crediting the digital wallets of consumers like you and me. This would be much more effective even than helicopter money. It’s not hard to think of ways this could be further enhanced to be more specific and targeted. For example, the Fed could issue Fedcoin tokens that expire after a period of time - this would ensure that stimulus funds are spent and not hoarded. Or they could selectively stimulate certain economically deprived areas or regions.

At this point, I imagine any libertarian leaning readers of this blog are beginning to break out in cold sweats and shudder at the idea of the government having so much control over your wallet. Fortunately for them, it seems like a central bank backed digital currency is a long way off. I spoke to Perianne Boring, President of the Chamber of Digital Commerce which helped organize the event. She told me that most of the central bankers in attendance were not really looking at this idea and that it was likely the first time it had been discussed. However, she also pointed out that any central bank that did embrace digital currencies would likely have a first mover advantage as investors reallocated to more efficient currencies.

(If this kind of topic interests you, please check out our upcoming webinar on Blockchain Adoption in Capital Markets)