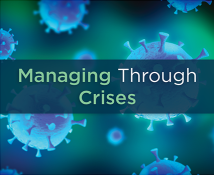 Is Globalization in Corporate Banking Receding? Not so Sure...

There has been considerable discussion about whether cross-country banking is decreasing in the wake of the COVID-19 crisis. Our recent research paints a more differentiated picture.

World trade reached its maximum in 2007 at 61% of world GDP and has been trending downward since. The recent U.S. trade policies and heightened awareness of the importance of national autonomy are likely to accelerate this process of re-nationalization.

The COVID-19 crisis has put a spotlight on supply chain disruption risk, and consequently, supply chain strategies are being re-examined—more often than not with the objective to shorten supply chains and to bring production back closer to consumers.

Is the same happening in banking? While one of the last markets to catch onto the global integration trend, banking might be also one of the last to follow the new trend of decoupling.

Our data finds non-domestic banks in the banking pools of almost all large corporates (≥€500m turnover) across Western Europe. These banks are used not only as suppliers of cheap funding, but in many cases have provided valuable advice and financial support during the current crisis.

Greenwich Associates talked to 275 large corporates across Western Europe between March and June 2020. The results demonstrate how the current crisis is exceptional, affecting almost all industries.

About 70% of the large corporates in our study indicate that the crisis has had a negative or highly negative impact on their business. On average, these corporates named five banks as their core providers, two of which stood out as providing exceptionally good support during the crisis. Overall, this reflects a much more favorable perception of banking support compared to that reported during the financial crisis 2008/9.

We have collected detailed data about the banking pools used by these corporations and the extent to which each bank has demonstrated an ability and willingness to provide the companies with advice and financial help during the current crisis.

Our data demonstrate that, at least for large, globally active corporations, banking pools seem to remain international, with corporations drawing on domestic as well as foreign banks for advice and financial support.

While domestic banks are more frequently cited as being supportive, non-domestic and even non-European banks are also frequently listed as providing exceptional support. The increased role of banks in the implementation of national financial support schemes does not seem to have damaged long-standing international banking relationships. 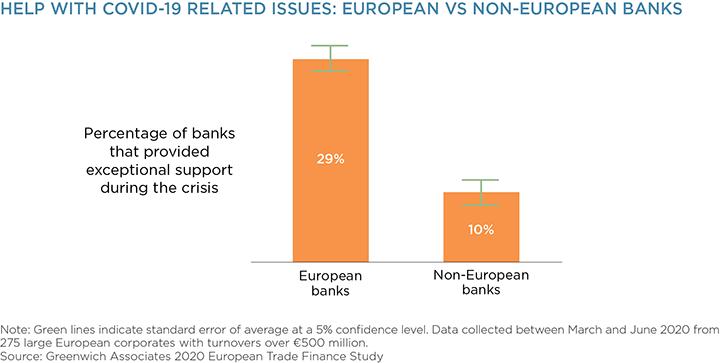 Use of Domestic vs. Foreign Banks Varies by Country

The picture varies somewhat depending on the company’s home country. Whereas in Scandinavia domestic banks are the main suppliers of crisis support, in countries such as France, Italy and Germany, domestic banks are only about twice as likely to provide exceptional crisis support. In the Netherlands, Ireland and Switzerland, however, foreign banks are cited as equally or even more supportive than domestic banks. These results reflect that many of the companies headquartered in these countries have strong operational and historical roots in other countries, which likely pairs with strong relationships to banks located there.

Perhaps surprisingly, the U.K. corporates appear to rely largely on domestic banks for crisis support. In terms of providing advice and support, the British banking sector seems almost as strongly centered on national banks as the Scandinavian banking sector—despite being one of the most international banking market places globally.

Obviously, we are only at the beginning of seeing the economic impact of the COVID-19 crisis and it might be too early to predict the extent of the economic fallout. This is also true in terms of the effect it may have on the dynamics of bank-firm relationships. It is certainly also true in regards to the type of support corporates are looking for.

The provision of liquidity and operational support have been particularly appreciated during the first wave of the crisis. Support in the form of strategic advice seems to be less important in the more immediate term. However, we expect this to increase once companies have managed to get through the initial shock phase and are looking to rebuild their businesses in a new post-COVID environment.

The strain on domestic and European banks is likely to increase further in the coming months. National financial support schemes that have been the main source of stability in many countries may well slow down going forward. Given that, the relatively low write downs many European banks have applied during the first three months of the crisis relative to some of their non-European peers will have to increase. This might negatively affect the banks’ capacity to support clients going forward.

At the same time, non-European banks operating in Europe may choose to slow down their support and re-direct their firepower to their respective home markets—a pattern that was relatively widespread during the 2008/9 crisis.

Much will depend on the shape of the rebound, as bank balance sheets are generally better equipped to hold on longer to their original long-term strategies than during the last financial crisis. But all of this does not seem to be happening yet. So far, we have little evidence that banks will catch on to the new trend of decoupling.

Guest commentator Michael Troege is Professor of Finance at ESCP, Paris and Dr. Tobias Miarka is co-Head of Banking and responsible for banking research at Greenwich Associates.

METHODOLOGY
Between March and early June 2020, Greenwich Associates conducted a total of 275 interviews with large corporates (annual revenues of €500 million or more) across Western Europe, asking group treasurers and other decision-makers on corporate and transaction banking products about their initial reaction to the COVID-19 crisis.

Toby Miarka advises international as well as domestic banks on strategic client service and product issues that result in profit enhancing and sustainable solutions. Before joining Greenwich Associates in 2006, Toby was a vice president at an M... view more