Global foreign exchange markets are experiencing a spike in volatility—not in the traditional sense of fluctuating currency valuations, but rather in the larger than usual changes in shares of the dealers who execute FX trades. In terms of market share, four dealers are ranked closely atop the global FX market: Citi and UBS are statistically tied in first place, while Deutsche Bank and J.P. Morgan are tied for third. Barclays and Bank of America Merrill Lynch are statistically tied, rounding out the top five. These firms are the 2016 Greenwich Share Leaders℠ in Global Top-Tier Foreign Exchange. 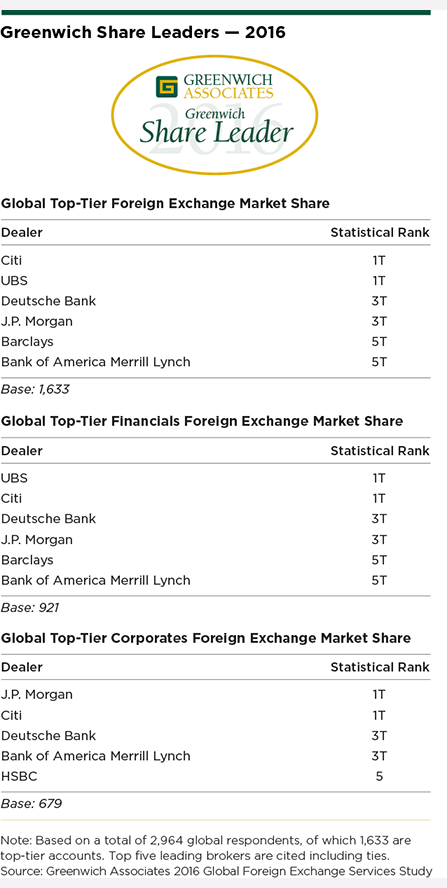 The past 12 months have brought meaningful swings in position for FX dealers, with some prominent firms ceding significant market share and other dealers gaining ground.

Many year-over-year market share reductions reflect changes in strategy on the part of individual dealers. These firms have reduced the scope of their FX coverage as they prioritize profitability over market share.

Meanwhile, certain rivals—including J.P. Morgan, Bank of America Merrill Lynch and Goldman Sachs—have gained share at the expense of other dealers by building out their platforms and competing aggressively for business.

On net, these fluctuations have produced a flatter and more competitive market. In 2014, the market’s top three dealers captured more than one-third of global customer-generated FX trading volume. In 2015 that share dipped to 30%. That trend also holds true for the industry’s top five dealers, whose aggregate market share declined year-over-year.

The movement of trading business to electronic systems is contributing to this flattening trend. The market’s biggest and most active investors executed 76% of FX trading volume electronically in 2015. E-trading volumes could climb further. As dealers look to reduce costs and focus resources on customers with the best profit potential, other investors are finding themselves pushed to lower-cost electronic platforms. 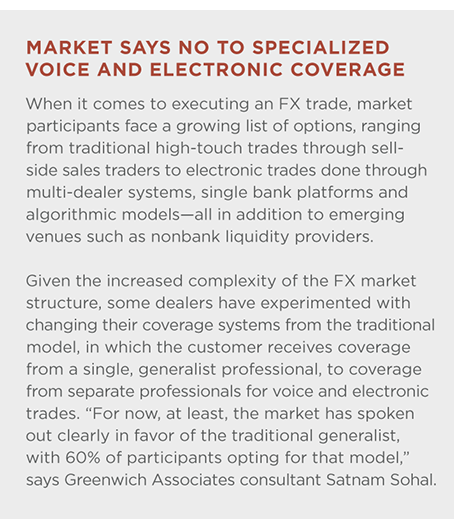 "One way that dealers, both at the top of the market and lower in the ranks, are winning market share is by being aggressive in their pricing on multi-dealer electronic platforms," says Greenwich Associates Managing Director James Borger.

J.P. Morgan has significantly increased its footprint on these platforms over the past couple of years and now ranks first for penetration globally, followed closely by Citi. Bank of America Merrill Lynch, Deutsche Bank and HSBC round out the top five most prominent banks on MDPs.

While multi-dealer systems are clearly on the rise, an average of more than 20% of trading volume of banks and hedge funds is still executed on single-bank platforms. Barclays, Citi and Deutsche Bank are the clear top three most actively used single-dealer platforms globally.

"Proprietary platforms give banks a means of retaining profitable trading volumes, so dealers are expanding these systems to provide a range of liquidity choices that enable clients to access the market in a variety of ways, including disclosed and non-disclosed liquidity, agency and principal trades, and links to exchange-based execution," says Greenwich Associates Managing Director Woody Canaday.

Dealers are also in the early days of what promises to be an all-out arms race in algorithmic trading. Currently only 13% of top-tier FX customers use algorithmic trading models. However, that share approaches one-quarter among the market’s biggest buy-side participants and 30% among hedge funds.

Two trends suggest that algorithmic trading is gaining traction in FX. First, market participants that use algo-rithmic models are tapping an expanding number of dealers for algorithms. Second, current users are routing growing shares of trading volume through the models, from 25% in 2014 to 28% in 2015. Hedge funds that trade algorithmically now use these models for about half of total trading volume. Greenwich Associates conducted interviews with 2,964 users of foreign exchange globally, of which 1,633 are top-tier accounts, at large corporations and financial institutions on market trends and their relationships with their dealers.

Interviews were conducted in North America, Latin America, Europe, Asia, and Japan between September and November 2015.