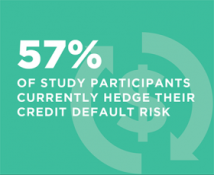 The credit default swap (CDS) market has been in decline for many years, inducing some market participants to shift to other products for their hedging needs. Whether the CDS market can be revived has been a topic of recent debate. At the same time, the volatility in Q1 and the announced policies of the world’s central banks are shifting the focus of investors to the availability of hedging products. Regulators and innovators have begun to take notice.

The current credit cycle is one of the longest on record and, looking at the Chicago Fed’s National Financial Conditions Index, there seems to be no end in sight. In the past six months, credit conditions have continued to ease and are about as benign as they have been at any point since the financial crisis. That said, the Federal Reserve is now nearly three years into its normalization of interest rates, and the bout of volatility that equity markets experienced in the first quarter, along with the challenges that some emerging markets are undergoing, may be harbingers of things to come. The best time to hedge is when you can, not when you must. So while there is not a lot of stress in the credit markets, Greenwich Associates sees this as a good time to examine the market for credit-hedging products.

We asked 60 asset managers and hedge funds active in the credit markets about their methods for hedging credit exposure and specifically about their views of the credit default swap market. CDS are, of course, the financial product that took the financial world by storm from 1996–2007, as noted in our previous research1. During the financial crisis, CDS transmitted credit risk around the financial system with remarkable speed and incredible scale, and in a way that could not be easily monitored, given the tools available at the time.

In the wake of the financial crisis, a number of reforms were enacted, giving authorities greater transparency into the CDS market by requiring trade and position reporting. To reduce counterparty risk, the authorities mandated or strongly encouraged central clearing. Procedures were altered to improve netting, and contracts were altered to improve standardization. Their capital treatment was also reformed, as were the protocols by which CDS could be traded. 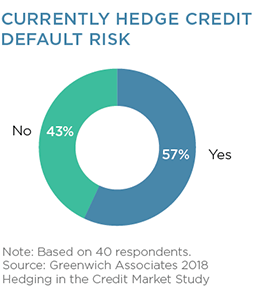 While these reforms have reduced the level of counterparty risk, they have also had the effect of reducing liquidity and, thus, the utility of the CDS itself. Case in point: Notional outstanding and average daily volumes in CDS markets have declined substantially. Index CDS markets have done better than single-name, but both have experienced declines.

Investor sentiment, as measured by this research, bears this out and gives some insight into how market participants are adapting to changes in the markets for credit hedging. We asked our study participants whether or not they hedge their credit risk and nearly 60% said they do. Forty-three percent reported using CDS, 45% do not, and the balance once did but had stopped. Aside from the expected decline in CDS usage, this also shows that the proportion of investors hedging credit is greater than the proportion using CDS. This implies that some investors have begun using other products for hedging purposes. 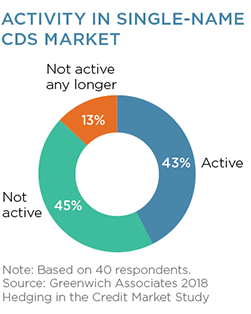 Now that the regulatory wave has crested, some investors have migrated away from CDS to other products. Others hope for a revival of the single-name CDS market. Some of the largest names on the buy side have worked to promote this revival, which has yet to bear fruit. Among respondents, nearly 60% were unsure about the prospects for a revival, with the remainder evenly divided.

Among those expecting the market will recover, nearly two-thirds believe that the regulatory environment will improve, and more than half contend that dealers will commit more capital to making markets, a response that may be conditional on the regulatory regime or on some other shift in the markets. The focus on the dealers also mirrors the doubts of those who think the market will not recover.

Interest in Hedging Rises as Investors Focus on Risk

This uncertainty about the potential for a revival of the CDS market comes at a time when market participants are increasingly concerned with the need for credit hedging. The low rate environment has led to asset managers being preoccupied with managing inflows seeking yield and the allocation process for the wave of new issues. This is beginning to shift to a focus on risk. 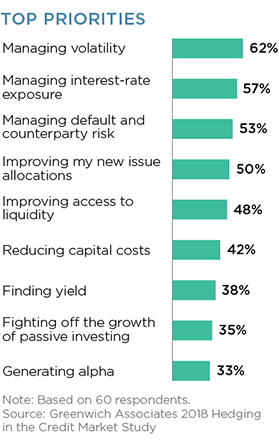 Notably, when asked about their largest concerns in credit markets today, the top three responses were all related to managing risk. But at the bottom of the list were “fighting off the growth of passive investing,” which could be thought of as a proxy for beta, and “generating alpha.” This is remarkable. Generating alpha is the thing asset managers are paid most directly to do—what does it mean that this is the least of their concerns?

First, this deep into the cycle, asset managers are now comfortable generating returns in the current environment. Second, they recognize that in the not too distant future, the main differentiator of manager performance will shift to the other term in the Sharpe ratio: standard deviation. Risk has begun to overshadow return.

This is clearly reflected in the market participants’ wish list for changes they would like to see in the credit markets. No. 1 is the ability to more effectively hedge risk. Second is desire for a wider range of credit instruments, very likely related to the first. Next is improved ETF liquidity, followed by a restoration of, or an alternative to, the single-name CDS market. Down at the bottom of the list are “improved dealer liquidity” and, in last place with a minimal 10%, “non-dealer provided liquidity.” 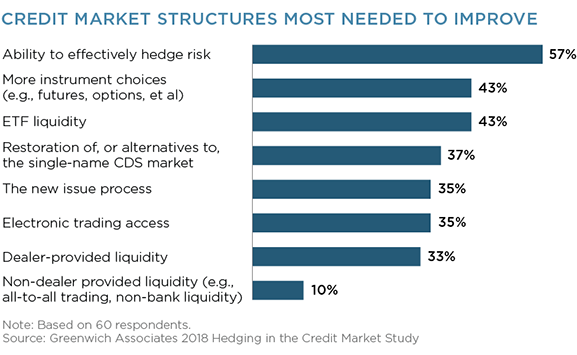 This is particularly interesting given that just a few years ago, there was a wave of fintech startups trying to mobilize buy-side liquidity, many of whom failed or continue to fight for volume. MarketAxess launched OpenTrading which has, in fact, seen remarkable growth, although it still remains a small percentage of overall market volume in absolute terms. Mobilizing the buy side to become the source of its own liquidity at scale remains a daunting technical challenge. The ranking of non-dealer liquidity in the study reflects the acknowledgement of that challenge. That said, the main improvement the buy side would like to see is a greater ability to hedge.

This combination of issues has important implications for the credit markets. Uncertainty about corporate bond liquidity and the recovery of CDS markets, combined with a shift in focus away from return and toward risk on the part of asset managers, is sparking concern. In response, the SEC has formed the Fixed Income Market Structure Advisory Committee, as it shifted its focus away from equity market structure. The inaugural FIMSAC meeting in January was framed by a presentation from Greenwich Associates about the overall state of the fixed-income markets. The committee has been remarkably productive in its first few months, with new potential rules already drafted.

The SEC and the CFTC have signed a new MOU governing how they cooperate in CDS regulation, leading to speculation that the CDS clearing mandate may be extended from broad-based indices to single names as well. The CFTC is hard at work on a set of SEF rule changes aimed at helping firms build liquidity in specialized instruments like single-name CDS.

The Market Works to Innovate a Solution

Just as the CDS was a private sector initiative, the efforts to revive or replace the product have been as well. In the wake of a string of manufactured defaults and issues with the Determinations Committee process, a group of hedge funds has collectively begun to look at reforming the product outside the ISDA framework. Naturally, ISDA itself has also weighed in on the issue. Large buy-side firms like BlackRock and PIMCO have also been supportive of the product.

At the same time, other firms have looked to provide alternatives to CDS. As the study result show, the most widely known is the increased use of bond ETFs by fixed-income managers. By leveraging the equity market’s clearing infrastructure, ETFs have enabled some nonbank market makers to enter fixed-income liquidity provision through an equity proxy. This, in turn, is transmitting equity market liquidity into the fixed-income market via ETF create-redeem baskets.

For all its virtues, however, the ETF market remains a less than perfect hedge for the credit market. Unlike swaps, it does involve an exchange of principal, so it’s relatively capital-intensive. Also, ETF components tend to be broader than CDS indexes, to say nothing of single-name CDS.

Efforts to create products to replace or compete with CDS as a credithedging tool aren’t new. There have been several waves of credit futures which failed, due to relatively technical factors related to the indexes on which they were based. ERIS credit futures, which replicate the cash flows of a swap through variation margin payments, have gotten some traction, with ERIS recently finding equity partners from the industry.

As with ETFs, however, index-based futures are an imprecise hedge. They may compete effectively with index CDS on the basis of funding and transaction costs, but can’t be used to hedge individual credits. The CBOE has tried several times to use options-based methods to replace single-name CDS. While these enabled firms to take a view on credit, they had structural flaws that also made them imperfect hedges compared with CDS.

DelphX, a company that has been working on credit market improvements for several years, has a new options-based solution called a covered put option (CPO). A CPO is a security that references a specific underlying CUSIP rather than all issues of a reference credit, so it is a more refined product than a single-name CDS.

The collateral covering each CPO is secured by the sale of a covered reference note (CRN) linked to the performance of the underlying CUSIP. At time of purchase, CRN holders can elect to either retain exposure to the original CUSIP or pool that risk with other CRN holders who have also agreed to pool and, thereby, diversify their risks. Thus DelphX, through the use of actuarial science and insurance protocols, seeks to transform the problem of today—a desire for greater yield—into a solution for the problem of tomorrow, the need to hedge.

For the time being, asset managers continue to be forward-thinking, looking for tools to help them manage volatility, though credit markets remain remarkably benign. The authorities and market participants have some time to work on enhancing the tools at their disposal should the need for credit hedging become acute. This period of calm will not last forever, though, given the scale of issuance that has occurred during this lull in volatility. When the demand for cost-effective hedging arrives, it will reward the hard work market participants are putting in today. 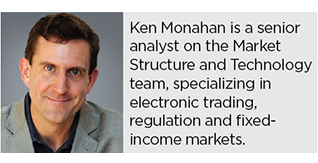 Between May and June 2018, Greenwich Associates interviewed 60 North American and European asset managers and hedge funds active in the credit markets about their methods for hedging credit exposure and specifically about their views of the credit default swap market.