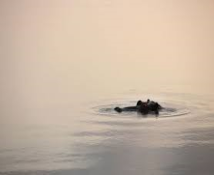 Trading volumes in U.S. Treasury (UST) markets hit records in March. For the week ending March 6, the average daily volume (including coupons and bills, but not TIPS) was $1.025 trillion per day ($997 per day for only coupons) — a record. On March 9, the ICE BofAML MOVE Index that tracks UST market volatility hit 164—yet another record.

The volume (and volatility) was a boon for dealer trading desks, UST trading platforms, market makers, and everyone else that makes money on turnover. Bank earnings proved just that, with J.P. Morgan, for instance, reporting its bond trading operation (which handles more than just UST) posting revenue of $7.3 billion for the quarter. 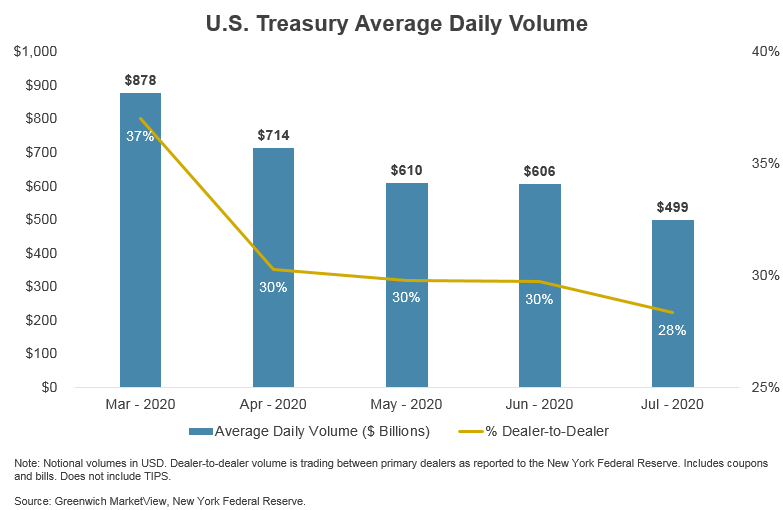 But now, four months later as we enter August, UST markets are eerily calm—some would say dead. This is an odd turn of events, given the level of uncertainty that still exists in the world and in the markets. In contrast to that $1 trillion dollar week in March, ADV for the week ending July 17th is only $424 billion. Coupon volumes on their own show an even more dramatic drop to only $251 billion a day that same week—a quarter of the activity seen in early March.

Volatility has also followed suit, with the MOVE Index down nearly 70% averaging roughly 52 in July (which played a part in depressed interest rate derivative volumes as well). It is also worth noting that dealer-to-dealer activity as a percentage of total volume is also down, as is trading in off-the-runs. 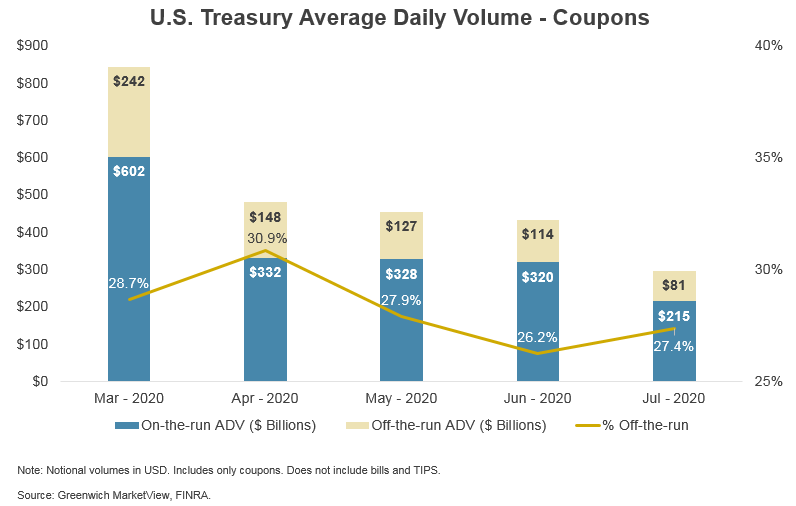 It does not appear that market volumes are back to normal either—they are actually below normal in most cases. So what’s going on?

To start, there is a people element. I know it might seem overly simplistic, but many market participants haven’t, until now, taken any vacation since the holiday season back in December. Market craziness, a need to show productivity working from home, a massive jump in unemployment, and a fear of traveling caused spring break, Memorial Day and 4th of July plans to all get scrapped.

The result is a burned out market that is finally taking some time off—some voluntarily, some because regulations say they must. And while algorithms certainly drive a lot of trading volume these days, people are still at the controls.

Then there is the Fed, which just committed to keeping their emergency programs open through the end of the year. As our research recently pointed out, the Fed’s volume contribution to the market at this point is pretty small—less than 1% down from 6% in March.

But the Fed’s role in quiet markets is more than just their (lack of) buying activity. Rates are historically low, and Chairman Powell has made it clear they will be sure they stay that way for the foreseeable future. Market participants are already positioned as such, reducing the short-term need to trade in some cases.

And then there are the market makers. Conversations with market participants tell us that some of the smaller firms with UST market-making strategies have pulled out of the market after being caught off guard in March. The reduced use of central limit order book markets (also pointed out in recent research) further reflects a pullback in market-maker activity. (It is worth noting, conversely, that dealer-to-client e-trading via RFQ has rebounded nicely). And lastly, reduced volatility reduces profit opportunities for market makers, which in turn reduces volumes, which further reduces the opportunity profit—and on and on it goes.

Markets are Prepared for a Bumpier Road

Now, all that said, we shouldn’t get complacent. Summer vacations (or staycations this year) will come to an end, and when they do, the U.S. election will take center stage, as will reports on COVID vaccine human trial progress. The Fed will have to start paring back its Treasury holdings eventually, which could also roil markets if any changes in that regard are unexpected.

To say that the trajectory of the virus and its impact on the economy remain uncertain is an understatement. Markets will roar back in time, but the obvious question is when? Regardless of that timing, however, we can rest assured that the market’s infrastructure can handle it and the liquidity picture will look much better than it did in early March, now that the Fed has made it clear they will tolerate nothing less.