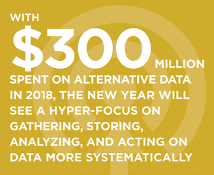 Market structure change over the past decade has been directly or indirectly catalyzed by the credit crisis of 2008. It can be argued that everything from cryptocurrency to swaps clearing to ETFs saw change and/or growth due to the market’s reaction to the near collapse of the global economy 10 years ago. That post-credit crisis era, however, is now over. Easy-money policies around the world are coming to an end, interest rates are rising, volatility is returning, and what felt like endless market upswings are no longer assured. And now that trading desks have senior vice presidents who were still in school when Lehman Brothers failed, the path forward is not about how it used to be, but how it should be now. With that in mind, and in no particular order, these are our Top 9 Market Structure Trends for 2019:

Despite some short-lived spikes, volatility has remained relatively low for the past decade, as markets have risen and the U.S. Federal Reserve injected more and more stimulus into the economy. While this has been great for retirement accounts, it hasn’t offered a prolonged test of the new post-crisis market structure. That means major portions of Dodd-Frank, EMiR, MiFID II, Basel III, and other large-scale legislative and regulatory changes around the world—all intended to reduce systemic risk—have had barely a chance to prove their true worth.

While we are certainly not predicting any major market calamities in 2019, we fully expect market volatility to stay with us. This will also include general uncertainty among market participants, increased volumes across the board and varied methods of risk-taking and hedging—some of which will end poorly. As a result, today’s market structure, which looks and feels vastly different than it did 10 years ago, will be forced to prove that it has, in fact, made markets better and safer.

In Q4 2008, CME had a market capitalization of $7 billion. ICE’s market cap at that time was $4 billion. A decade and some acquisitions later, CME’s market cap is now $65 billion, and ICE’s is $46 billion. That equates to growth of roughly 1000%. While not every exchange group saw such dramatic gains, the importance of exchanges around the world has grown tremendously, and 2019 will see them advance even more

The growth of ETFs and new exchange-listed and cleared derivatives will certainly help, as will further consolidation. But the real gains in 2019 will result from the push into two areas outside of their traditional sweet spots: products traded OTC and the sale of index-related products and data. 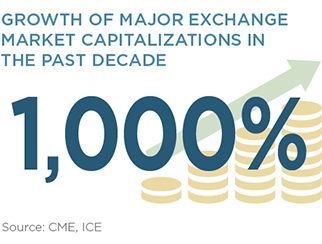 Spot foreign exchange, government bonds and corporate bonds have been at the center of several acquisitions over the past years (i.e., NEX Group, InteractiveData, BondPoint, TMC, FastMatch, 360T—need I go on?). 2019 will provide an opportunity for the exchanges to bring those purchases to the next level, with a wide range of new product integrations, trading methods, clearing solutions, and data offerings further cementing their critical place in the capital markets ecosystem.

In the wake of the rates manipulation scandal, Libor will effectively be dead in just two more years. SOFR and SONIA, among other benchmarks, are slowly starting to find their way into new contracts and debt issuance around the world, as the market is finally accepting and dealing with this enormous change. 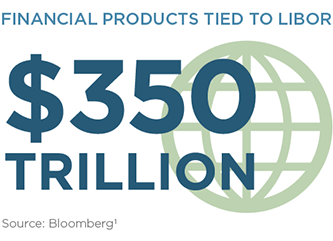 The impact of this on market structure goes beyond the $350 trillion face value of financial products currently tied to Libor. Hedging vehicles will need to change, making some existing futures and swaps products less useful, and the exchanges will all fight to take control of new SOFR and SONIA contracts. Existing contracts need to be renegotiated as well, creating a huge operational burden for the industry that will consume legal and operations teams for months to come. In the long run, the industry will adapt and move on, but the short-term fight to change will be intense and meaningful.

The buzz within institutional finance starting back in 2014 has oscillated between cryptocurrencies and blockchain, with one or the other creating the “true” opportunity coming out of Bitcoin’s creation in 2009. While cryptocurrencies and distributed ledger technologies (DLT) were hugely important innovations for financial markets, earlier dreams of completely replacing fiat currencies and market infrastructure have not come true, putting both into the trough of disillusionment.

In 2019 we will finally hit a point of realism. Institutional trading of cryptocurrencies will start to gain structure as regulators provide additional clarity, and DLT projects now five years in the making will start to bear fruit in places where that technology makes the most sense. Cryptocurrencies will not have taken over the world, but they will have firmed up their place in it.

The electronification of the bond market, while set to continue, is not new for 2019. However, the market is beginning to shift from on-demand prices toward continuous prices, more akin to the current foreign exchange market. More commonly referred to as direct streams, dealers and non-bank market makers are increasingly streaming continuous two-sided quotes for on-the-run U.S. Treasuries and are beginning to venture into doing the same for off-the-run U.S. Treasuries and U.S. corporate bonds. This allows the maker and taker of liquidity to know each other, while still allowing for a more continuous trading process.

Non-bank market makers are embracing the change, as this approach to trading suits their fully automated style much more than trading via RFQ. It might also finally act as a direct conduit between them and the buy side. And while the trend toward direct streams might seem like it would disintermediate the bond trading platforms, aggregating these streams is non-trivial. The fight for this flow is already underway in U.S. Treasuries—expect it to expand there and spill over into the corporate bond market as well.

No, this is not a broken record. Trading is going to get even more data-focused next year. Transaction cost analysis has become increasingly important over the last decade, and despite near saturation among equity traders, we should expect to see TCA become even more ingrained in the equity workflow. There are two main drivers behind this: The SEC recently voted to increase order-handling disclosure requirements for broker-dealers. Starting next year, brokers will be required to report detailed information about how they trade customer orders down to the microsecond level across all venues. In addition, 2019 will likely see the introduction of the SEC’s Transaction Fee Pilot, which will seek to ascertain the extent to which exchange fees influence routing behavior and trade performance.

So what’s going on? Are equity markets headed toward analysis paralysis? In reality, this type of granular dissection of trade performance is already being done by the smartest market makers and proprietary traders, so it makes sense that the rest of the market hopes to level the playing field. And expect adoption to quickly accelerate beyond equities in 2019, with FX and cash fixed income taking the lead.

One thing that comes up in every market structure and technology conversation is the growing importance of data. From the $300 million spent in 2018 on alternative data to pre-trade transparency to indexing to real-time market data, 2019 will see producers, distributors and consumers of data hyper-focus on gathering more of the right data, storing it in new ways, analyzing it via machine learning and AI, and acting upon it more systematically than ever before.

And the data obsession within financial services is not over-hyped—not even close. The amount of data will only get bigger, and it is fair to say we’ve only scratched the surface in terms of ways in which it can be applied to making money in the markets.

The United Kingdom is scheduled to leave the European Union by March 29, 2019. Even the Brexit-supporting government acknowledges that the deal they have negotiated will lead to worse economic conditions than staying in the European Union would. Outflows from U.K.-focused equity funds have already hit $20 billion. France is expected to overtake the U.K. as the world’s 5th largest economy and thousands of financial services jobs are expected to shift from London to Paris, Frankfurt and Dublin.

However, an even worse outcome than the government’s deal would be no deal at all—which would have significant impact on cross-border financial services, especially clearing of Euro-denominated interest-rate swaps, 90% of which are cleared in London. There are other scenarios that could also come to pass, including Prime Minister Theresa May being replaced, a general election that could lead to a Labour government, and/or a second referendum that could reverse Brexit. Only one thing is really certain—political and market volatility are set to continue well into 2019.

ETFs are already pretty hot, and 2019 will be more of the same in that regard. But the time has finally arrived for traders to stop treating them the same as the single stocks that trade alongside them. HYG and IBM both trade in the U.S. equity markets, but they are very different animals and should be treated as such. Why would anyone think trading a high-yield bond portfolio should be done in the same way as a decades old U.S. tech company? Trading algorithms, TCA and other portfolio-related tools will begin to really emerge in 2019, allowing investors and traders to more smartly utilize ETFs going forward. 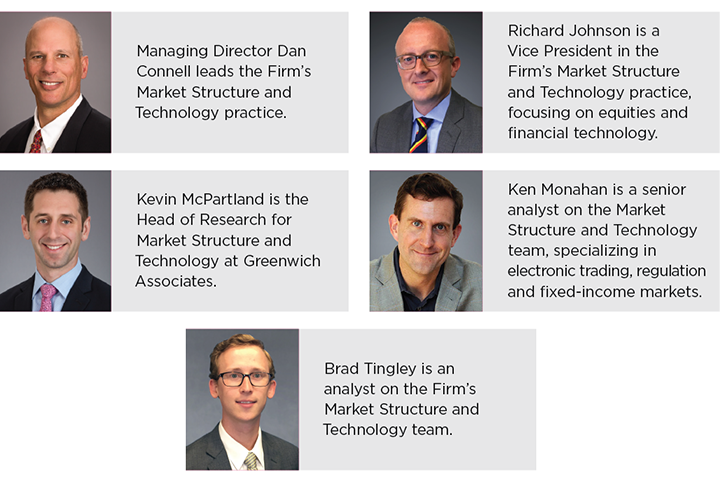