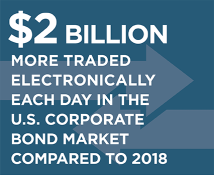 The center of gravity for financial institutions continued shifting toward technology in 2019. Trust and human interactions still matter a great deal, but even in those corners of the market where deals are done over the phone, the role of technology is pervasive. Yes, people want to talk to people—but increasingly they only want to talk to those people with the best technology by their side.

We expect these trends to continue in 2020, but U.S. politics and Brexit will increasingly take center stage. We will leave predictions for the S&P 500, interest rates and volatility to the equity analysts, economists and quants (not necessarily in that order). Here are our biggest market structure trends to watch in 2020:

The world is more polarized than ever, with evidence of the ideological split dominating market headlines and Main Street conversations on both sides of the Atlantic. It remains unclear whether the election for prime minister in the United Kingdom and forthcoming Brexit decisions foreshadow what is to come in the United States in November 2020. It is crystal clear, however, that political debating among Elizabeth Warren, Bernie Sanders, Mike Bloomberg, and President Trump about a wealth tax, financial transaction tax and trade tariffs will bring volatility to markets before, during and after the U.S. election.

We suggested that 2019 would be the year market participants finally paid attention to the Libor transition1—and it was. Now that those who will be most impacted by this change are considerably more informed, the discussion will get increasingly nuanced, making a path forward more clear. We do not expect a “big bang” move away from Libor, despite banks knowing the date they will no longer be required to contribute prices. We also do not expect there to be a single Libor replacement. SOFR, EONIA and SONIA have the support of local governments, but none is a perfect replacement. The reality is that different things need different benchmarks. Should a residential mortgage and a billion dollar swap contract be tied to the same benchmark, for instance? This transition will be painful, but it’s for the best.

We have written extensively on the degree to which the electronification of FX markets may have plateaued2, thus increasing competition among venues. Venues are now competing with one another, rather than trying to peel volume away from voice transactions—a much more difficult process. In the coming year, we believe there will be an increase in the adoption and utilization of TCA to quantify and systematize that process. The increased utilization of API aggregators to access multiple liquidity sources creates a tournament among the venues, which provides a more complete picture of the market against which to judge them. This will drive market participants to seek out better and more actionable analytics to drive order-routing decisions in 2020.

In 2019, the authorities revised the Uncleared Margin Rules (UMR) implementation timeline, pushing the final phase for firms with $8 billion in gross notional of bilateral derivatives out to September 2021 from 2020. This delay was necessary because determining whether a firm is in scope and deciding how to mitigate its effects are both complex processes. Many on the buy side were and will be surprised at the increase in costs associated with certain instruments and strategies that will now require posting initial margin to third-party custodians. Financial market infrastructure providers will compete to offer advice and solutions to these firms but, in the end, UMR will drive the biggest change in the OTC derivatives markets since the implementation of mandatory clearing.

Peak compliance technology spending in the face of shrinking compliance budgets might seem counterintuitive, but this dichotomy will nonetheless dominate the 2020 regtech conversation. Regulations have tightened, enforcement continues to increase, and heightened public scrutiny carries evermore dire consequences to reputational risk. Consequently, firms can no longer ignore the need for proactive regtech investments3. Monitoring trading and related activities has been a growing priority for market participants during the last decade, with spending on specialized solutions surpassing $1 billion.

Yet as the financial industry enters the 2020s, many firms still have not maximized full efficacy and cost efficiency in their surveillance infrastructures. Solutions offerings are more diverse than ever, and underlying technology boasts advancements such as natural language processing, machine learning and other AI components. Firms may be pulling back the reigns on compliance budgets, but many are doing so by taking a more proactive approach toward technology investment in lieu of personnel expenditures. The coming year will be a race against further budget reductions and see toughening competition among vendors—but the market will be better for it.

U.S. equity commissions have been on a downward trend for both institutional and retail clients since at least the mid-70s, culminating in zero-commission trading for retail investors in 2019. Led initially by robo advisors like Robinhood and Firstrade, Interactive Brokers was the first mainstream broker to throw down the zero-commission gauntlet. Quickly on the heels of that move, TD Ameritrade, Fidelity and Schwab lowered their commissions to zero, and several bank trading platforms made similar if somewhat less sweeping changes.

Unsurprisingly, the move to zero-commission trading negatively impacted TD Ameritrade’s stock, which played a part in Charles Schwab buying the firm. We think further consolidation is likely, as the players try to expand, with economies of scale keeping the retail brokerage business viable. The zero-commission environment will also drive further regulatory (and customer) focus on best executions. Sure, the service is free, but expectations for better services despite lower (and in this case no) fees will only continue to grow.

SEC Rule 6c-11—the ETF Rule—was put into effect while many ETF market participants were gearing up for a long winter break. The new rule allows open-ended ETFs (as well as index ETFs and transparent, actively managed ETFs) that meet certain conditions to come directly to the market without having to seek exemptive relief (as has been the case for over 27 years). Previously, seeking the required SEC exemptive relief cost issuers upward of $500,000 (the more complex, the more expensive). That's all set to change. In 2020, we will see ETFs go from conception to listing in a fraction of the time.

Of course, the cost of running an ETF is not inconsequential, so even with a simplified regulatory process, failure is an option. Consequently, a jump in new ETF issues will also create a jump in new ETF failures. Nevertheless, we believe there will be a wave of ETFs that take advantage of this newfound ability to come to market much more cheaply, raising the number of ETFs beyond their already sky-high levels. As has been proven already, the knock-on effect for options and underlying cash markets (i.e., corporate bonds) should be equally positive.

Electronic trading levels have been our metric of choice for innovation in fixed-income trading over the past several years. Absolute volume traded through electronic channels—request-for-quote, order book, direct streams—most certainly still matters and increased by over $2 billion a day in U.S. corporate bond markets in 2019. But that narrow definition doesn’t capture true progress in these quickly evolving markets.

Investors began widely adopting automated trading tools in 2019, and measuring their growth in the coming years will be incredibly important to understanding market structure changes. Furthermore, electronification of processes on the trading desk other than the execution itself—salespeople deciding whom to call, more efficient capital allocation, etc.—will happen more quickly and have a greater impact on the market’s functioning going forward.

Around the turn of the century, programmers started finding their way onto the trading desk. Over the course of the following decade, those programmers morphed into quants who spent less time on cool user interfaces and more time on trading algorithms and market-prediction models. It is becoming clear that the early part of the ‘20’s will see data scientists take over those seats on the desk. Data scientists aren’t actually kicking out quants and programmers. Data scientist is the new name for someone expert in programming, quantitative analysis and (of course) data. One could argue that most if not all of the market’s evolution over the past decade has come because of access to data and the ability to put it to work. So it should come as no surprise that those expert in doing just that are taking over.

Automation and technology have changed the face of wealth management, but wealth management will continue to have a face. Our data continues to show that investors of all wealth levels trust people more than they trust technology and would rather put the fate of their investment account with someone they can actually talk to. Somewhat paradoxically, however, advisors who provide not only sound advice but also the latest “wealthtech” are trusted even more.

Even when the ultimate decision is made by the humans involved, technology provides an unparalleled level of transparency into a portfolio—what's been bought, sold, how often, and for how much. This creates even more trust in financial advisors than was possible in the past, removing any lingering concerns that their actions are anything but in the investor’s best interest.