The ION/MarketFactory Merger, Implications for FX Market Structure and Beyond

The fragmentation of the FX market structure is legendary, so consolidation within it is always of interest.

Indeed, earlier this year we wrote a summary of all the mergers that have happened in the FX platform industry in the course of speculating about a consolidation that did not take place. Then, just weeks after we published a paper in which we remarked on the fact that FX API aggregators had overtaken ECNs among our study respondents, another merger dropped like a bombshell into the FX market structure.

What’s Behind the Merger?

ION, the fintech conglomerate, announced the acquisition of MarketFactory, a pioneer in the API aggregation business, for an undisclosed sum. MarketFactory just closed a funding round in January led by Accel-KKR, a Silicon Valley venture fund. Venture funds typically have pretty high return expectations, so while no one can know for sure, it’s likely that the valuation was healthy. There are good reasons to think this aside from the return demands of Silicon Valley investors: There are a number of potential strategic rationales for the merger.

A Graphical Representation of the Business of MarketFactory: 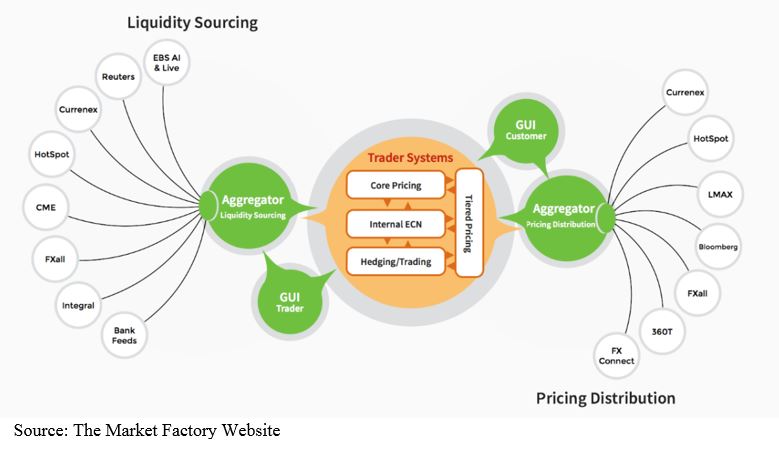 Founded in 1999 on the basis of some key insights into what technologies and standards would be necessary to advance electronic trading, ION grew rapidly and drew the attention of sophisticated investors. ION levered its early advantages via a long string of strategic acquisitions.

From Rolfe & Nolan in 2008 to Fidessa in 2018, the firm has built out its franchise across customer segments and asset classes and through multiple legs of the trade lifecycle. When a firm that has had this much experience acquiring and integrating firms, buys one in an up-and-coming field, it’s a good idea to take a closer look and try to work out the logic of the acquisition.

Deeper into the FX Realm

At first glance, it might be tempting to think of this merger as driven, or at least sparked by, the acquisition over the summer of Barracuda FX by Broadway Technologies. To be sure, ION and Broadway are much different companies, but there is some overlap in their business and certainly in their client base, as they are sometimes mentioned in the same breath. The Barracuda acquisition may not have been threatening to ION per se, but it might have alerted them to the utility of acquisitions in the sector, and in particular in the connectivity and integration section of the market.

This isn’t ION’s first acquisition in the FX realm. In 2011, they acquired Wall Street Systems, an FX-focused provider of Treasury Management Systems (TMS.) Over the years, ION has assembled a suite of TMS products, several of which rate highly in Greenwich Associates annual study of large corporate cash management trends.

Corporates are one of the most, if not the most, important client segments in the FX world. This is because international corporations are, on a near constant basis, generating FX risks they need to hedge out, and they treat this as a necessary cost of doing business, which they are happy to pay.

Many corporations view their FX management as part of their cash management and so trade directly with banks over the phone or their single-dealer platforms (SDPs.) There has been a trend across the industry of firms moving to multi-dealer platforms (MDPs), but, as we have written elsewhere, the banks have been working hard to retain corporate clients on their SDPs and have had some success.

Thus, the acquisition of an FX API aggregator by a major TMS provider may be an indication that there might be significant change coming to the corporate FX market.

Last fall we noted that while firms that use SDPs often use several, firms that used an MDP usually chose one: making the MDP market winner take all. An integration of MarketFactory into the TMS suite of ION would make it much easier for corporate TMS to put the MDPs in competition with one another for corporate clients. This would be a tectonic shift in that market. As noted in our recent paper, API aggregators are already quite popular among buy-side firms, and this may well be a way of spreading them to the corporate sector.

Granting corporates access to API aggregation through their TMS systems may not be the only rationale. ION operates pan-asset class and made its name originally in fixed income. Major shifts in market structure in both the U.S. Treasury market as well as in credit markets that might make MarketFactory’s DNA as an API aggregator at least as, if not more, valuable to ION as its existing API connections.

In the U.S. Treasury market, dealers have been streaming prices to clients for a while, and the rise of streaming aggregators, such as LiquidityEdge and FENICS, invites comparison to the FX market. These trends are clearly visible via Greenwich MarketView: U.S. Treasuries.

It may be that ION sees an opportunity to extend the MarketFactory model into Treasuries. In credit markets, streaming prices which Greenwich Associates identified as one of the top trends of 2019, are on the cusp of market acceptance. This and new trading protocols on the platforms are also beginning to lend themselves to comparisons with FX markets.

It may be that the MarketFactory acquisition can be seen as ION making a bet not only on FX markets, but also on the trajectory transformation of bond markets.